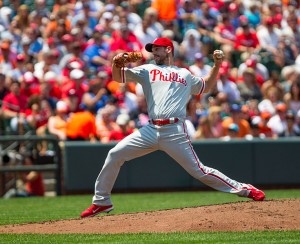 Cliff Lee is on the trade block. In other news, the Earth is round. The Phillies’ southpaw is no stranger to being dealt, having swapped clubs via trade thrice in his career. Every time he’s been available, the Yankees have had some connection whether it was trade talk or free agency. All of the failed attempts to acquire the ace hurler have been frustrating, but probably no more annoying than when he was sent to Texas from Seattle, when it appeared the Yankees were wrapping up a deal. Three years later, Lee could be moved again, and the Yankees should get involved. It’s not as crazy as one might think.

Lee, 35, has two years and $50M remaining on his contract, with a vesting option for $27.5M. The total money guaranteed is $62.5M, because of a $12.5M buyout if his option does not vest. That’s a lot of money, but think about the other pitchers available, and the lengthy commitments required to obtain them. Plus, if the option vests, it probably means he’s still in good shape at 37. The third year becomes guaranteed if he pitches 200 innings in 2015 or 400 innings across 2014-15, provided he does not end 2015 on the disabled list with an elbow or shoulder injury.

Dave Cameron of Fangraphs wrote about acquiring star players in the middle of their contracts, related to a Jose Bautista trade rumor from November:

…as we discussed last week, the contract trend for elite players now is length over annual cost, and teams that want to acquire players of Bautista’s stature have had to choose to take on expected dead money in order to obtain a few valuable years at the front end of a long term contract. There is simply no way to acquire a player of Bautista’s caliber on a two or three year commitment in free agency.

He makes a great point – there’s no way a player like Lee would only get two or three years on the open market today. He might be 35, but he’s shown no signs of slowing down after another stupendous season, posting 5.1 WAR in 2013. On today’s market, Lee probably could get a four to five year deal that pushes $100M. I’d be happy to have him for just two or three seasons, even at a high AAV.

With Masahiro Tanaka‘s status in limbo, the three best starting free agents available are Matt Garza, Ubaldo Jimenez, and Ervin Santana, and all of them are projected for about 3 WAR per Steamer over 200 innings pitched. Lee’s Steamer forecast pegs him at 4 WAR (ZiPS is more optimistic at 4.5), about a full win better than anyone on the open market. Yet, to get the other guys, the Yankees would have to commit what is likely to be five or six seasons. It would be for a cheaper AAV than Lee, but ages 35-37 for those guys are going to be worse than Lee’s. In fact, Lee is better than all of them now, even at an advanced age. Acquiring Lee not only gets the Yankees a better pitcher than what’s available, but also hedges against the risk of a long-term contract for a lesser pitcher.

Let’s say Lee’s WAR dropoff is one per year, accelerated from the typical 0.5 WAR seen in many analyses. That brings him to 9 WAR over three seasons, and at $6M per win, that’s $54M of value. It’s short of the $77.5M he would make over those three seasons, but it’s certainly a conservative estimate of WAR going forward. Plus, as I’ve discussed ad nauseum this winter, the Yankees cost per each additional win is higher than others. Moreover, Lee could still be a five win pitcher next year, making his projections going forward rosier. Simply put, it’s not insane to think that Lee could fulfill his contract value in pinstripes.

There are a couple of potential hold-ups to a trade, assuming the Yankees are interested. One is his no trade clause, that includes the Yankees. That would be a pretty big hurdle to clear, especially after he spurned the Yankees in free agency a couple years ago for a multitude of reasons. Another issue is Philadelphia’s desire to dump the entire contract without eating a penny. The Steinbrenners may simply not be willing to take on all the money. However, the benefit of eating the salary is that the Yankees’ shouldn’t have to part with anything substantial, despite demand for a “huge return“. Philly GM Ruben Amaro Jr. knows he can only get one or the other, not both. Yet, if he is persistent, the likelihood of this deal is even slimmer than it already stands.

The Yankees need a starting pitcher – it’s no secret. The rotation is abound with issues and concerns. Lee would solidify the staff immediately if he could be brought in. Unfortunately, the roadblocks in the prior paragraph make this deal’s chances of occurring extremely small. Regardless, it can’t hurt to explore the possibility.

This entry was posted in Offseason, Speculation, Trade Talk and tagged Cliff Lee. Bookmark the permalink.