Now that the Yankees have some extra cash lying around due to Alex Rodriguez‘s suspension, there’s probably a good chance they’ll go all in on Japanese import Masahiro Tanaka, who has until January 24th to sign with a major league team. At this point, I see little reason why the Yankees wouldn’t or shouldn’t go out and get Tanaka. Brian Cashman (hopefully) has some new-found financial flexibility today and Tanaka would be the best investment he could make to help the team win in 2014. The Yankees desperately need another arm in their rotation and, although risky, Tanaka’s the best available.

Last week, I tried to anticipate how Tanaka would fare in the MLB by looking at the performances of other Japanese starting pitchers who have made the leap across the Pacific in recent years. I estimated that he would have something like a 19% strikeout rate, 7% walk rate, and 1% home run rate, which works out to something like a 3.00 ERA. To get a better idea of what this would look like, I’ve decided to use these findings to come up with a few living, breathing comparables for Tanaka.

Dave Cameron did a similar type of analysis at Fangraphs last week and came up with a list pretty similar to mine. Although he guestimated Tanaka’s K% and BB% based on scouting reports rather than his Japan stats, his thresholds were very much in line with mine.

I searched for pitchers who in the last three seasons had K%, BB%, and HR% within one standard deviation of what I projected for Tanaka and found… nobody. Mainly because his projected HR% would have been the lowest in baseball over that period. Tanaka did allow just six dingers in 212 innings last year, but if there’s one piece here that seems fishy, it’s his homer rate. So to actually get some players in my sample, I considered all pitchers within 3 standard deviations of his projected homer rate: 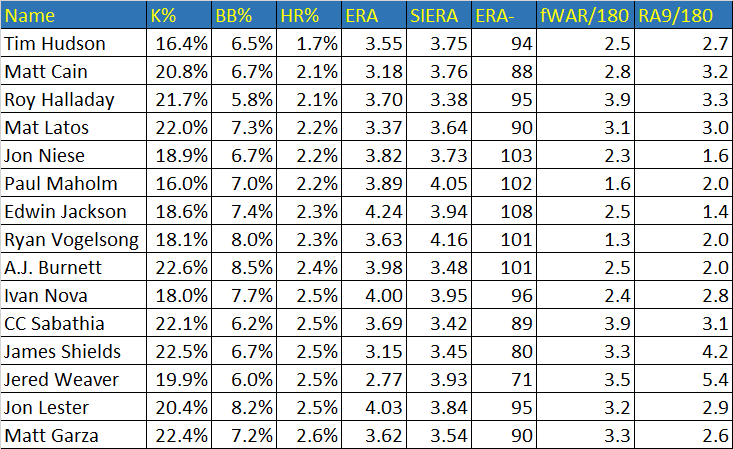 There are some really good pitchers on this list, like Roy Halladay and Jered Weaver, but also some mediocre, middle-of-the rotation guys. I doubt the Yankees (or any team) would be too thrilled about locking up Jon Niese or Edwin Jackson for $20M a year. Although, those guys probably represent the absolute worst case scenario for Tanaka.

All things considered, Tim Hudson seems to be the most appropriate comp for Tanaka. Not only does Hudson have the lowest home run rate on this list, but like Tanaka, he possesses a nasty splitter capable of inducing ground balls — a skill that would come in handy pitching in the friendly confines of Yankee Stadium. Although he wasn’t a superstar, modern-day Hudson was still a reliable 3 WAR pitcher, which would slot nicely into the Yankees rotation. At the end of the day, it’s anyone’s guess as to how Tanaka’s skills will translate from Japan. Signing Tanaka is a gamble, but a Hudson-esque performance seems to be one of the more likely scenarios; and I’m sure the Yankees would be happy to bring a young Tim Hudson into the fold.