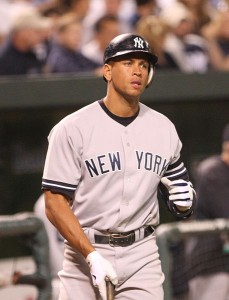 As you surely know by now, Alex Rodriguez will not be playing for the Yankees this season. The Yankees now have some more money to play with, but are also without a starting caliber third baseman. Arbiter Fred Horowitz’ rendering, in all likelihood, won’t make a difference in the team’s ability to get below the $189M competitive balance tax threshold, but could reduce the tax that would be forked over.

One interesting note is that the Yankees aren’t fully absolved of A-Rod’s salary in 2014:

– @BizballMaury helped me confirm, according to JDA Alex gets $2.86M in salary this year based on $25M + his regular $3M bonus due Jan 15th.

With that in mind, the Yankees have about $169M on the books, before arbitration and pre-arbitration contracts are determined. Layer in Matt Swartz’ arbitration estimates and the pre-arb players, and the Yankees jump to $187M. That’s a minuscule amount of wiggle room for a team with a few big needs. One of those needs, the rotation, could be solved with Masahiro Tanaka, whose expected deal would put the team far over the limit.

Even if the team loses out on Tanaka, it would be very difficult to sit tight just to avoid the tax. Not only is the rotation thin, but the infield and bullpen are as well. Hal Steinbrenner has stated that he would not sacrifice contention for financial benefit, so I imagine Brian Cashman would recommend an alternative course of action that would require the team to go above $189M. Plus, there is also the chance that the Yankees will need to make an addition at the deadline, and the possibility of performance bonuses vesting. If that puts them over midseason, they might as well just go over now. The Yankees know this, and are obviously acting on it based on the pursuit of Tanaka.

Hopefully, it also means we will see a solution at the hot corner. Like him or not, the Yankees are significantly worse at third without A-Rod. Chances are he wouldn’t have stayed healthy all season, but when he’s on the field, he’s easily the team’s best option. Aside from Stephen Drew, there is nobody on the open market or internally that would be expected to put up a performance equivalent to that of a healthy Rodriguez. Unless it’s posturing, it doesn’t look like the Yanks are in on Drew. Ultimately, Rodriguez’ void will be felt on the field, and makes the suspension a bittersweet one for the organization.

This entry was posted in Austerity Budget and tagged Alex Rodriguez, Masahiro Tanaka. Bookmark the permalink.