During this year’s free agency period, Brian Cashman has wasted no time signing top-tier outfielders Jacoby Ellsbury and Carlos Beltran. Today, in our final installment of this series, a look at how Cashman has done adding open-market outfielders before Ellsbury and Beltran. The outfield has been the most frequently maneuvered non-pitcher spot in free agency under Cashman’s reign. This is partly because there are three spots to cover, but also because it hasn’t had longtime stalwarts in comparison to the infield positions.

The breakdown of the good and bad is just about what one would expect, with one main exception. The one that initially caught me off-guard was Ichiro Suzuki, whose deal was widely ridiculed. Perhaps it was sent down by ownership, but even so, based on what teams pay for a win on the open market, one win for $6.5M a year is just about what to expect. Odds are that his performance falls short of his salary this season, as he’s been relegated to a bench role with Ellsbury and Beltran in tow.

Of the other good signings per this analysis, three of them went to late-in-career veterans: Andruw Jones, Marcus Thames, and Raul Ibanez. Ibanez’ playoff heroics make him stand out from the trio. However, while Cashman has been lauded for some of his older outfielder acquisitions, a few have been major flops. Rondell White, Randy Winn, and Ben Francisco were complete duds and did not last in New York very long. 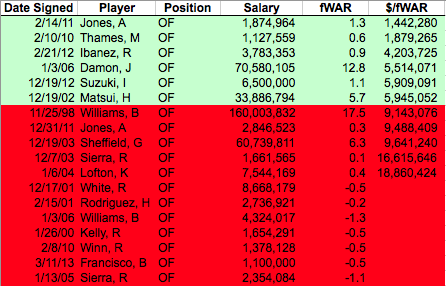 The two best long-term deals were awarded to Johnny Damon and Hideki Matsui. Damon was remarkably consistent during his four-year run in the Bronx, posting a WAR of at least 3.2 in all but one season (the other was 2.5). In the final year of his deal, he was a catalyst in bringing the World Series trophy back to the Yankees. Matsui never exhibited the power he displayed in Japan, but was a big contributor to the offense. Furthermore, the amount of media coverage brought to the club certainly resulted in a positive effect on the organization’s bottom line.

Arguably the worst of the long-term contracts was given to Bernie Williams. You may recall the Yankees retaining him at the last minute, when it looked like Boston was closing in. Pretty hard to imagine Bernie donning a Red Sox uniform, but it seemed like a possibility at the time. Interestingly, the contract was actually looking great for the first four seasons in which he accumulated 19.5 WAR. In those years, he was paid about $4.9M per win, an absolute steal. Yet, the final three seasons were so disastrous (-2 WAR) that they make the deal look bad in the aggregate.

During this series, it seems like I’ve always mentioned one or two players that weren’t Cashman’s call at every position. The outfield was no different, as River Ave. Blues’ Ben Kabak explains part of George Steinbrenner’s offseason rampage in 2003. Kenny Lofton was brought in as a challenge to Bernie, and not only was bad, but disliked by Joe Torre. Gary Sheffield was also a Steinbrenner addition, chosen over Vladimir Guerrero who Cashman apparently preferred. Sheffield actually raked in 2004 and 2005, but missing most of 2006 due to injury resulted in a lot of empty dollars spent. If 2006 is eliminated from consideration, Sheffield’s cost per win drops to a reasonable $7M. Nonetheless, Guerrero would of been the more logical signing at the time.

In general, it seems that Cashman has done a good job with the moves he evidently had full discretion over. Let’s hope that the Ellsbury and Beltran signings prove to be wise choices as well.

With this being the final edition of the free agency history series, the rest series can be found below: