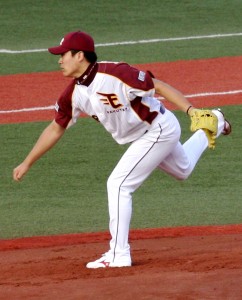 Just one day after the Yankees sealed the deal with Masahiro Tanaka, it seems that there is some pessimism pertaining to his contract. What if he turns into the next Hideki Irabu or Kei Igawa? Will he be able to handle one fewer day of rest inbetween starts? Will he struggle against superior competition? So on and so forth. Yet, with all of these “concerns” in mind, the Yankees ponied up $155M for Tanaka plus a $20M release fee. For a guy who has never pitched in the majors? Oh, the horror.

At first glance, the money does seem wild. $155M over seven seasons, with an opt-out for Tanaka after year four is a significant outlay. But is it truly outlandish? Not really, especially if you look at Dan Szymborski’s ZiPS projection for Tanaka’s first seven seasons in the Majors.

Szymborski’s model has Tanaka’s peak innings total, 191, in his first season, and results in an average of 173 for the years before the opt out. In fact, his system doesn’t project Tanaka to be particularly durable, forecasting innings pitched decreases all seven seasons. Nonetheless, the forecast still pegs Tanaka to be a very good pitcher while he’s on the field.

Any way one slices it, this deal is fair value based on the ZiPS estimate. The contract looks even better if he proves to be more durable than what ZiPS says (in this analysis, 190 IP/year for four years, 150 IP/year thereafter). Comparing xSalary to actual pay, the Yankees will have received commensurate value up until Tanaka’s opt out. If he follows the projections, but doesn’t utilize the opt out, the deal should be worthwhile including the final three seasons. The caveat is that he probably won’t opt out if he performs poorly.

It’s worth explaining why I used $6M per WAR, with the amount inflating 4% each season. In Szymborski’s article, he used $5.45M per season with 5% yearly inflation. In November, Dave Cameron noted that teams were paying about $6.2M per projected WAR in free agency, so I decided to round that number to an even $6M. Cameron’s look at the price of free agents was early in the offseason, but still a decent yardstick for the market. The inflation number stems from my post looking at Robinson Cano‘s price. I actually used a lower amount of salary per WAR in that piece, which in retrospect was likely a mistake.

Brian Cashman made it clear that the organization heavily scouted Tanaka, so it’s not like they’re going into this blind like it seemed they did with Igawa. And no, this isn’t anything like what happened with Irabu. That was an offense-friendly environment and a time where the league knew less about Japanese imports. Fifteen years later, I think it’s safe to say the Yankees and the other 29 clubs have an improved understanding of how Japanese talent adapts to playing in America. Are teams getting every player right? No. But it’s fair to say they have a better idea of what they’re doing, and it appears that the Yankees valued Tanaka appropriately.

This entry was posted in Analysis, Free Agency and tagged Masahiro Tanaka. Bookmark the permalink.