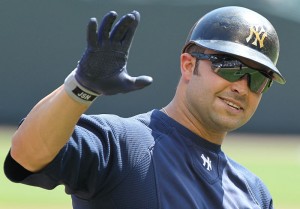 In an clear attempt to subvert the competitive balance tax, the Yankees failed to retain a multitude of key players from 2012 at season’s end. A year later, some of those decisions are perplexing considering the spending spree the club has gone on, putting them above the tax threshold. The key players lost include Russell Martin, Nick Swisher, Raul Ibanez, Eric Chavez, and Rafael Soriano. All of them left a void in 2013, and some may continue to leave holes going forward.

Before signing Brian McCann, Martin’s departure to Pittsburgh would be the obvious choice. Chris Stewart was an utter disaster after Francisco Cervelli succumbed to injury in the prior season, and the future at the position otherwise was relatively unknown. Austin Romine has stalled, and despite J.R. Murphy‘s surge, odds are the Yankees weren’t going to hand the reigns to a rookie. Gary Sanchez is at least a year or two away, and there is debate about him sticking at the position long-term. Once McCann was added, the concerns dried up immediately. Losing Martin hurt badly in 2013, but thankfully there shouldn’t be any long-term issues with McCann in tow.

Swisher, Ibanez, Chavez, and Soriano left voids in 2013, but some will be missed more than others going forward. Despite his postseason heroics, Ibanez is probably least missed simply because of the age risk and him being nothing more than a designated hitter. Chavez was yearned for a bit more, but his checkered injury history and age didn’t make him much of a better bet than Kevin Youkilis last season, and does not make him a favorable option to Kelly Johnson in 2014. Soriano would be a welcome addition to the currently-thin bullpen, but given the lesser value stemming from relievers versus other positions, his absence is marginalized in comparison. That leaves Swisher, the opportunity the Yankees probably would like a do-over on knowing what they do today.

Sure, the Yankees patched up right field with Carlos Beltran, but ponder this: would you rather have Swisher ages 33 through 35 or Beltran ages 37 through 39? Easy: Swisher. Both are owed the same amount of money across that span. Had the Yankees retained Swisher, not only would they have had a much better outfield in 2013, but they would also be better set for the next three seasons. The 2014 consensus projection is right around two WAR for Beltran, while Swisher ranges from two to three. Perhaps the immediate production will be similar, but Beltran is a much greater risk. Swisher has been durable, while Beltran’s knees are worrisome.

One might argue the discrepancy between the two players’ postseason performances as a way to peg Beltran has an upgrade. Beltran is an October legend, while Swisher has scuffled in the playoffs. This logic is silly though, as the Yankees nor any team are guaranteed to get to the playoffs. They have to get there first, and because of this, I’d rather have Swisher at this stage. Swisher’s volatility going forward is lower, and it’s not like he can’t have a big October. It’s been done before: Alex Rodriguez.

An underrated part of Swisher leaving was his ability to play first base. It sure would be nice to have him be able to slide in for Mark Teixeira considering his wrist woes. Swisher would have been a capable replacement last season, and would make me feel a lot better about the position in 2014. The lack of a contingency plan for Teixeira is a big concern in 2014, but that’s a piece for another time.

The mistakes a year ago aren’t merely allowing a few players to leave, but other opportunities the organization passed up. For example, the Yankees might have weighed a run at now-Dodgers starting pitcher Zack Greinke. The scramble to save money not only cost the Yankees their own stars, but the chance to add other needs on the market.

Obviously, hindsight is 20/20 and the Yankees’ front office isn’t spending any time kicking themselves for previous mistakes. They can only move forward and play with what they have. The organization has thrown money at its self-inflicted wounds, but it’s evident that the 2012-2013 winter will continue to be felt in the coming years.