In the coming days, I will take a look at projected stats for all of the players in big league camp this spring. Yesterday, in the first installment, I broke down what the various projection systems forecast for the Yankees’ starting pitchers. Today, I will continue the series by looking at the team’s relief pitchers.

There are a handful of projection systems out there that attempt to use statistical methods to forecast how players will perform in the future. The major systems out there include Davenport by Clay Davenport, Oliver by Brian Cartwright of Hardball Times; PECOTA by Baseball Prospectus; Steamer by Jared Cross, Dash Davison and Peter Rosenbloom, and ZiPS by Dan Szymborski of ESPN. Projections almost never predict performance with perfect precision, but give at least a general and objective prediction of what to expect out of a player going forward.

Additionally, Fangraphs hosts a crowdsourcing platform where every day fans like you and me can predict players’ performances. The Fans projections are only available for a select few players — namely those players who Fangraphs readers find interesting enough to project. They also tend to be somewhat biased as fans tend to be more optimistic forecasters than heartless computers. For these reasons, I didn’t include the Fans projections in the averages listed in the far right-hand column of the graphic below.

The following chart displays projected ERA’s for all of the relief pitchers in camp with the Yankees. 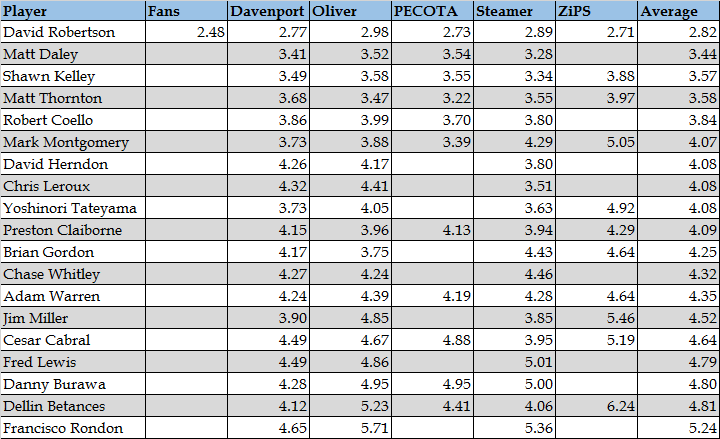 David Robertson obviously has some big shoes to fill as Mariano Rivera‘s replacement, but the projection systems suggest he’ll be just fine, unanimously projecting him for a sub-3 ERA. That’s not Craig Kimbrel-level dominance, but still makes him one of baseball’s top relievers.

Behind Robertson, the Yankees’ primary setup men this figure to be Shawn Kelley, who will take over the eight inning role from Robertson, and free agent acquisition Matt Thornton, who will replace Boone Logan as the team’s loogy. The systems peg both of these pitchers for ERA’s in the mid-to-high threes. While not bad, these projections aren’t particularly exciting for the guys who are expected to be numbers two and three on the bullpen totem pole.

As Derek outlined a few days ago, the aforementioned trio are practically locks to make the team, but the remaining four bullpen spots are all up for grabs. Matt Daley, who’s in camp as a NRI, actually projects to be the second best reliever on the team. Once a promising young reliever with the Rockies, Daley’s had a hard time staying on the field for years now. His projection doesn’t come out of nowhere — he dominated in triple-A Scranton last season and capped the year off with six shutout innings for the Yankees. Still, Daley’s rank on this list is mostly a testament to the lack of elite relievers on the roster.

After that front four, there’s a myriad of relievers who project for an ERA of around four — Preston Claiborne, Robert Coello, Mark Montgomery, David Herndon, Chris Leroux, and Yoshinori Tateyama. Claiborne has a good chance of breaking camp with the Yanks, while all of the others have only an outside shot of making the team. Montgomery, the only prospect of this group, faced his first bit of adversity in triple-A Scranton last year after completely destroying every minor league level through double-A. He has the projection systems polarized. They appear to be divided on how heavily to weight that one down season. PECOTA (3.39 ERA) has him as the third best reliever on the team, while ZiPS (5.05 ERA) thinks he’s nothing more than triple-A depth at this point. Montgomery’s 2013 was cut short due to shoulder problems, so it’s hard to know how much of his performance drop-off was due to injury rather than facing better hitters.

Adam Warren‘s projection leaves a lot to be desired, but he’s still one of the favorites to make the team — be it as the fifth starter or as a long man. He’s got big-league experience and is capable of providing four or five innings at a time, which can’t be said of a lot of the names on the above list. Similarly, if David Phelps and/or Vidal Nuno don’t end up cracking the rotation, either could end up heading north as the team’s long reliever and spot-starter.

Dellin Betances‘ projection is also pretty disappointing, especially for someone with a good shot of making the opening day squad. After year of struggling to get it together as a starter, the Yankees finally moved him to the ‘pen and watched him excel to the tune of a 1.25 ERA over 65 innings in Scranton.  Sure, his walk totals (12%) tell us he wasn’t as dominant as his ERA would suggest, but still, it’s hard not to feel like those projections are selling him a little bit short.

For better or for worse, Joe Girardi will presumably want a second lefty out of the pen, meaning the Yankees will probably hand Cesar Cabral a 25-man roster spot. The other lefties in camp — Fred Lewis and Cesar Cabral — are definitely not major league caliber pitchers right now. Still, either could end up getting a callup at some point since you don’t have to be particularly good to make it as a second loogy. Rondon’s projection looks especially bad, but given his stuff, you can see him developing into a useful player if you squint hard enough.

The rest of the crew — Chase Whitley, Brian Gordon, Jim Miller, and Danny Burawa — have little chance of heading north with the team and Whitley’s probably the only name here even worth remembering. Still, I wouldn’t be shocked if any of the guys mentioned in this article end up in the Bronx at some point in 2014. Solid relievers can emerge from the unlikeliest of places and the Yankees don’t exactly have a shortage of bullpen innings up for grabs.