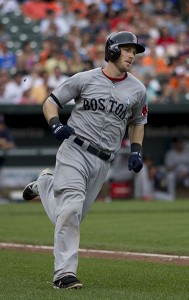 Slightly more than a month ago, I examined why the Yankees had exhibited little interest in pursuing Stephen Drew. Circumstances have changed since then, but the need to bolster the infield hasn’t varied. Masahiro Tanaka has joined the Yankees, blowing the Yankees past the luxury tax threshold. Derek Jeter has announced 2014 to be his final season, meaing the Yankees will require a new shortstop next season. Unchanged, however, is the composition of the infield for 2014, which will feature some combination of Kelly Johnson, Brian Roberts, Brendan Ryan, Eduardo Nunez, Dean Anna, et. al. at second and third base. Looking at ability alone, Drew is an obvious upgrade. Let’s take a look back at my previous explanation for the Yankees balking at Drew, and see how their stance may or may not have changed.

1. Tax implications: The Yankees pay a fifty percent tariff on every dollar above the competitive balance tax threshold, and bringing in Drew would easily push the Yankees over the limit even if Masahiro Tanaka isn’t signed. If the Yankees pay $11M annually to Drew, which is what the Fangraphs crowd forecasts, the Yankees will take a $5.5M tax hit. Drew’s real cost for 2014 would be $16.5M, and that simply may be too much.

This still may be the top reason the Yankees are disinterested in signing Drew. We must remember that what the Yankees wind up sacrificing financially will be 1.5 times the face value of his contract, at least for 2014. Yet, perhaps it’s worth the expense. Given where the Yankees project to be on the win curve, the Yankees should be willing to spend more for each incremental win than most teams.

2. He’s not as good as his 2013 says: Drew was worth 3.4 fWAR last season, thanks to stellar defense and his strength against right-hand pitching (.378 wOBA). However, ZiPS is pretty down on Drew for 2014, foreseeing a .309 wOBA, slightly below average defense, and 1.6 WAR. Part of the pessimism stems from his poor 2011 and 2012, but it’s likely safe to assume that he won’t approach his 2013 performance. For an after-tax cost of $16.5M, that projected output would be an overpay.

Again, this is probably a legitimate concern for the front office.

3. Won’t commit long-term: Scott Boras won’t easily settle for one year with his client, which is probably what the Yankees would seek. He’s been trying to create a market for Drew with the Mets, but to no avail. It appears the Red Sox would prefer to retain Drew only on a one-year pact. Perhaps the Yankees are simply waiting to see if Boras will back down on multi-year demands.

This no longer is a defensible reason. Speculation is that Drew’s camp desires an opt-out after the first season, and could settle for a two year or three year deal with that option. If the Yankees don’t want to commit to him past 2014, fine. Unless something goes terribly wrong, Drew should want another chance at the open market, especially considering Jeter’s retirement plans. Moreover, maybe the Yankees would be willing to sign him past 2014 knowing Jeter’s plans.

4. Negotiating tactic: Building off the previous point, perhaps Cashman disclosing his lack of interest is a strategy to bring Drew’s price down.

5. Loss of draft pick: The Yankees are already out of the first and compensation rounds for the signings of Jacoby Ellsbury, Brian McCann, and Carlos Beltran, and would have to forfeit a second-round pick if Drew is added.

Although the Yankees may not want to forfeit a pick in this draft, there’s a chance Drew nets them a first-rounder in 2015. Assuming he joins the Yankees and hits the market after the season, the Yankees could stick him with a qualifying offer. Should that occur, the Yankees would either have Jeter’s replacement or an additional draft pick in 2015.

Normally, there wouldn’t be much clamoring for a player expected to add roughly two wins to a roster. But, considering the Yankees glaring weakness in the infield, those two wins constitute a substantial upgrade. Plus, Drew could be a solution to the Yankees shortstop opening after this season. Is he pricey? Absolutely. That shouldn’t be an issue for the Yankees, but it’s evident that ownership has decreed an end to spending this winter. With that in mind, don’t expect the Yankees to change their tune on Drew, despite him being a more sensible target considering the events of the past month. Unfortunately, this seems to something that makes too much sense to happen.