Yankees first base prospect Greg Bird had an excellent year in 2013, his first full season as a pro. After missing nearly all of 2012 due to injury, he really broke out in class-A Charleston. Overall, he posted a .288/.428/.511 triple slash. He spent the entire year in the Sally League, the lowest level of full-season ball, where he was the best hitter in the league by wRC+. Bird hit for a good amount of power, but what stands out most of all is his 19% walk rate. Very rarely do we see a player show so much patience at such a young age. In the last four years, no player under 21  has recorded a higher walk rate in full season ball. In case you were wondering, Pittsburgh’s Jaff Decker (then in the Padres organization) at age 19 was the last to top Bird’s mark.

The one fly in the ointment for Bird last year were the strikeouts. His 23% strikeout rate wasn’t terrible, but was a bit north of the league average of 21.6%. Still, Bird’s 2013 stat line looks promising — a good amount of power, not a ton of strikeouts, and walks up the wazoo. Yet, the list of players who’ve put up similar stats in the Sally league over the last couple of decades leaves a lot to be desired. 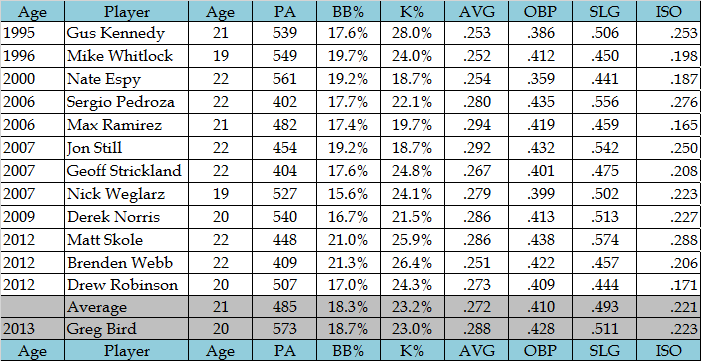 Oakland Catcher Derek Norris is the only one on the list who even resembles a major league regular, and even he would probably be replacement-level-ish he were a first basemen. The only other player with big league experience is Max Ramirez, who had a couple of cups of coffee with the Rangers a few years back, but never stuck. The balance have topped out at various levels of the minor leagues. The jury’s obviously still out on the 2012 crew of Drew Robinson, Matt Skole, and Brenden Webb, but for what it’s worth, none of the trio fared all that well last year in high-A last year. The collective demise of these players started immediately — virtually every one of the twelve failed to live up to their Sally league dominance the following year. The average line of .272/.410/.493 turned into a much less impressive .253/.373/.428:

Most strikingly, these players’ walk rates dipped by more than four percentage points on average. This isn’t all that surprising. The Sally League is filled with 19 and 20 year-old pitchers who have little idea where the ball is going. A batter could probably compile a decent amount of walks by simply not swinging. But when facing off against slightly more polished pitchers, that uber-patient approach may not be quite as effective.

Of course, there’s more to a player than his stat line. Bird’s generally regarded as one of the best eight or ten prospects in the Yankees’ organization, so it seems that people within the game are fans of his offensive potential.  Yet the same could have been said about most of the guys on the list above. Only three of those players were drafted after the seventh round (Bird was taken in the fifth) and three even appeared in Baseball America’s top 100 prospect list, which can’t be said about Bird, who hasn’t graced any top 100 list that I’ve seen.

Bird will head to high-A Tampa this year where he will face off against more advanced pitching and play in the more cavernous George M. Steinbrenner Field. Odds are, Bird won’t replicate his 2013 numbers, but it’ll be interesting to see just how far his numbers fall. He’s done nothing but rake so far, but as a first baseman, he’ll need to rely on his bat to carry him from here on in. Bird may have tore up low-A ball, but he still has a long path ahead of him before he becomes big league contributor — and history suggests the odds are against him ever making it.

Chris works in economic development by day, but spends most of his nights thinking about baseball. He writes for Pinstripe Pundits, and is an occasional user of the twitter machine: @_chris_mitchell
View all posts by Chris →
This entry was posted in Analysis, Prospects and tagged Greg Bird. Bookmark the permalink.

7 Responses to Looking for comps for Yankees prospect Greg Bird