Last week, Fangraphs added fielding data from Inside Edge to their site for the 2012 and 2013 seasons. Inside Edge is a company that employs scouts who measure the difficulty of fielding each ball in play. For each player, we now have a percentage for plays he made by degree of difficulty — from “almost certain” to “remote.” Any data based purely on scouting is subjective in nature, but it is still likely gives us some useful insight.

Here’s how Yankees’ first basemen — past and present — stack up against league averages. 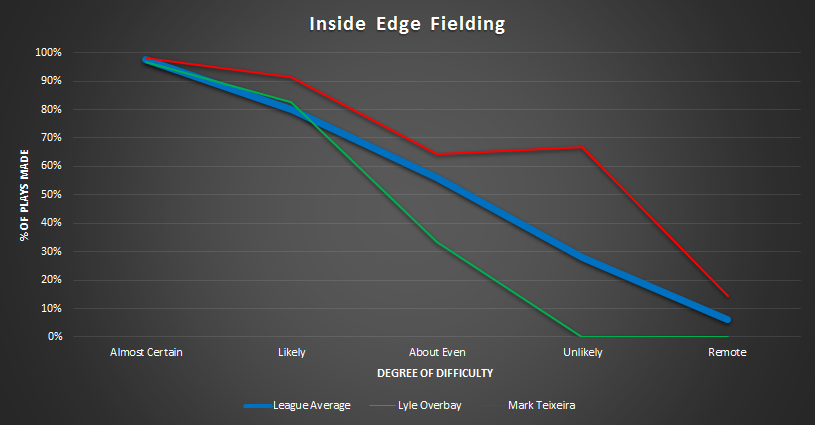 According to the Inside Edge scouts, Mark Teixeira grades out as well above average across the board, which jives with the advanced metrics and passes the eye test as well. With just one error and a league-leading .999 fielding percentage over the past two seasons, Teix is about as sure-handed as they come. He also has tremendous range, which enables him to make the occasional spectacular play.

Lyle Overbay was a pretty dismal at the plate while filling in for Teixeira last year; and he was nothing special on defense, either.  Overbay made the routine plays, but at 6’2” 235, wasn’t the rangiest of first basemen. Luckily, we won’t have to watch Overbay again this year; but if Teixeira’s wrist flares up again, we may be stuck with someone just as bad.

Chris works in economic development by day, but spends most of his nights thinking about baseball. He writes for Pinstripe Pundits, and is an occasional user of the twitter machine: @_chris_mitchell
View all posts by Chris →
This entry was posted in Analysis and tagged Lyle Overbay, Mark Teixeira. Bookmark the permalink.