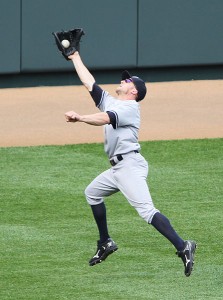 Last week, the Yankees locked up their third outfielder of the winter when they signed Brett Gardner to a four year, $52 million dollar contract extension. The deal covers 2015-2018, Gardner’s age 31-34 seasons. So far, Gardner’s tenure with the Yankees has been a productive one. Since he broke in in 2008, he’s been worth 17.8 WAR per Fangraphs, and even eclipsed the six win mark with his excellent 2010 campaign. Gardner’s a decent hitter — roughly league average over his career, but most of his value comes from his legs. He’s amassed 65 runs above average in defense (UZR + positional adjustment) and has added 30 more with his work on the base paths. No doubt, his speed has been a weapon these past few years, but there’s reason to question whether it will continue as Gardner enters into his thirties.

Defensive value tends to peak very early in a player’s career. At age 30, it’s probably safe to say that Gardner will never again be as good of a defender as he is right now. In fact, the days of Gardner playing elite defense may have already passed us by.

As I wrote  a few weeks ago, last year’s stats indicate he may be slowing down. His defensive metrics, base running metrics, and plain old stolen base totals all trended in the wrong direction last season. None of these stats are incredibly meaningful in just a one year sample, but it’s concerning that they all tell the same story. It’s even more concerning when you consider that Gardner missed all of 2012. That means it’s been three years now since he’s stolen more than 24 bases or logged a gaudy defensive metric. Still, even if he is no longer elite, he’s at least very good in the outfield and on the bases. But can we expect it continue?

I decided to look at past elite defensive outfielders to see how their defense has held up through their early thirties. To give Gardner the benefit of the doubt, I did not consider his uncharacteristically pedestrian 2013 season. Instead, going back to 1990, I looked at players who had elite outfield defensive numbers from ages 25 to 27 — as Gardner did before his injury in 2012. I used fielding plus positional adjustment, which addresses the fact that Gardner’s spent significant time in both left and center field.

Tracking this group through age 29, we see that, like Gardner, they experienced a pretty marked drop-off in their defensive metrics. Unfortunately, their numbers continued to descend further into mediocrity as they slogged through their thirties.

Note: For players younger than 34, I only considered the years they’ve played.

By age 31, the age at which Gardner’s extension starts, just 40% (6 out of 15) were even above average on defense. Michael Bourn and Franklyn Gutierrez, who will be playing their age 31 seasons in 2014, are only included through the age-30 proportion. The subsequent years consider the remaining 15 players.

Throwing out Bourn and Gutierrez as well as Chris Singleton, who was all but out of baseball by age 31, this group averaged about 7 runs below average from ages 31-34. Not all of them aged equally — not even close. Kenny Lofton held up extremely well and actually remained solid on defense until he left the game at age 40. He’s definately the exception, though, as others completely cratered — Sammy Sosa, Ken Griffey Jr., and Rondell White were just about ready for full-time DH duty by the time their 34th birthdays rolled around.

Note: Coco Crisp has not yet played his age 34 season.

Obviously, some of these players are better comps than others. Just going by size, I’d say Gardner’s more Kenny Lofton than Barry Bonds. Still, it’s a little concerning that 10 out of 14 players who were elite at age 27 were already below average by their early thirties.

Gardner’s a solid player right now, but if history is any indication, that may no longer be the case in three or four years. Very few players are blessed with defensive chops like Gardner has — and those that are generally lose them once they pass the big 3-0. Hopefully Gardner can buck that trend, because when you take away Gardner’s plus defense, he looks an awful lot like a fourth outfielder — generally not the type of player you lock up for $13 million dollars a year.

Chris works in economic development by day, but spends most of his nights thinking about baseball. He writes for Pinstripe Pundits, and is an occasional user of the twitter machine: @_chris_mitchell
View all posts by Chris →
This entry was posted in Analysis and tagged Brett Gardner, Pinstripe Alley. Bookmark the permalink.