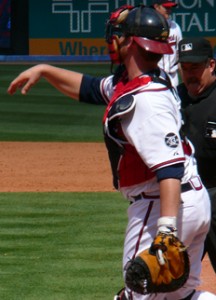 Yesterday, Baseball Prospectus unveiled a new model for quantifying the value of catcher defense. Unlike previous framing stats, this new methodology incorporates pitch-types, count, and umpire tendencies. They also released a stat that quantifies a catcher’s ability to block pitches.

According to the data, the Yankees have had more than their share of good framers in recent years. It’s hard to say how much of it has to do with advanced analytics and how much is simply listening to Tony Pena, who’s been drilling framing skills into the team’s catchers since 2006. In any case, it’s pretty clear the Yankees have been ahead of the curve in recognizing pitch framing as an undervalued skill. They’ve been targeting plus-plus framers for seven or eight years now, going back to the days of Sal Fasano — who’s now a pitch-framing guru with the Toronto Blue Jays.

Here’s the breakdown of the Yankees’ catchers graded out in 2013 by these new metrics. “Total Receiving Runs” takes into account all facets of a catcher’s defensive game, including framing, blocking, and “traditional” stats like throwing out baserunners. One win is worth approximately 9.5 runs, so Brian McCann‘s defense alone was worth about two wins last year — roughly one due to framing and another due to blocking.

And prorated per 7,000 opportunities (roughly a full season):

McCann was been worth worth 127 runs above average since 2008, making him tops in the majors.  Players with that kind of defensive skill who can also hit are super valuable. If these numbers are totally accurate, McCann’s something like a five win player, which makes his contract look like something of a bargain. The new data also give glowing reviews of the Yankees’ other catchers. Francisco Cervelli and Austin Romine, who combined for 5 runs above average last season. The artist formerly known as J.R. Murphy also graded out extremely well in his September cup if coffee. He had the 5th most runs saved in the high minors last year, so that rating may not be a total fluke.

Last year’s primary catcher Chris Stewart also rated very well in the pitch framing department. If his 19 runs above average number is to believed, he was actually worth about 2.5 WAR last year — more than Curtis Granderson. A little hard to believe, but the numbers don’t lie, I guess.

Stewart’s predecessor Russell Martin is also one of the best in the business, which makes it even harder to comprehend why they chose to let him walk following the 2012 season.

Unsurprisingly, Jorge Posada was terrible at both framing and blocking. Posada never looked all that smooth behind the plate and had a tendency to stab at the ball with his glove. Erstwhile Yankees prospect Jesus Montero was also atrocious in limited playing time. Compared to an average catcher, his pitch framing cost the Mariners roughly two wins in just 80 starts over the last couple of years. It’s not hard to see why he’s no longer a catcher.

Jose Molina has acquired a cult following in recent years thanks to his outrageous framing skills. On a per game basis, he’s the best framer out there. He played a role on the 2009 World Series team as A.J. Burnett‘s personal catcher. You can’t really blame A.J. for wanting to throw for Molina. The swing between Molina and Posada was something like 50 runs over a full season, which works out to roughly a half run in ERA.

Photo by User Chrisjnelson on en.wikipedia (From en.wikipedia; description page is (was) here) [Public domain], via Wikimedia Commons

Chris works in economic development by day, but spends most of his nights thinking about baseball. He writes for Pinstripe Pundits, and is an occasional user of the twitter machine: @_chris_mitchell
View all posts by Chris →
This entry was posted in Analysis, Worth Reading and tagged Austin Romine, Brian McCann, Chris Stewart, Francisco Cervelli, J.R. Murphy, Jesus Montero, jorge posada, jose molina, Russell Martin, sal fasano. Bookmark the permalink.