Spring Training concluded without the front office upgrading one of the Yankees’ primary weaknesses, the infield. It certainly doesn’t lack in name value, with Derek Jeter, Mark Teixeira, Brian Roberts, and Kelly Johnson. However, the projected performance of the group falls well short of what we’re accustomed to from these players, at least during the prime of their careers. Using a combination of the Fangraphs’ depth charts and the Baseball-Reference Play Index, I took a look at where this team’s infield is forecasted in comparison to others in franchise history.

Fangraphs’ depth charts uses a formula combining the ZiPS and Steamer projections while including playing time estimates. This year, the Yankees are expected to generate 6.9 WAR from the infield (I subtracted 0.2 stemming from Carlos Beltran at first base). Based on the playing time expectations, the infield will be a revolving door. Jeter, Roberts, and Johnson are pegged at 385, 315, and 285 plate appearances respectively, allowing Dean Anna and Brendan Ryan to combine for more than 600 trips to the dish. At least Mark Teixeira is projected to be healthy, with 560 times at the plate. I’d say the playing time estimates are on the pessimistic side, but using this unbiased prognosis, where might 2014’s group stand in franchise history?

6.9 WAR would make this the organization’s 23rd worst infield out of 114 seasons. It would be a slight upgrade compared to last year’s Robinson Cano dominated infield (6.4 WAR), but still pretty poor. It’s not easy to make up for that shortcoming elsewhere, but the Yankees did overcome a pretty bad infield in 2000 (5.6 WAR, 4.6 credited to Jeter) to win the World Series. That means almost nothing for this year’s squad, but nobody would complain about this season’s infield if that was the team outcome. 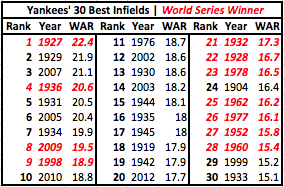 Although this year’s combination won’t be one to remember, the franchise has had plenty of of infields to brag about. The 1927 club, better known as Murderer’s Row, was tops in club lore. Lou Gehrig and Tony Lazzeri drummed up 18.1 of the 22.4 WAR, a total that essentially made the team a 70-win club before taking into account pitching, catching, and the outfield. They won 110 games and the World Series.

While I would have guessed the 2009 group to be the best in recent memory, 2007’s starting quartet and backups produced 21.1 WAR. Alex Rodriguez was league MVP that year, leading the charge at 9.5 WAR. 2005’s group also caught me off guard, but akin to ’07, A-Rod was accountable for almost ten wins. 2009’s infield was a bit more well-rounded, with Jeter, Teixeira, Cano, and Rodriguez accounting for 6.6, 5.3, 4.5, and 4.2 WAR respectively. If one removes Cody Ransom, Angel Berroa, and Ramiro Pena, that year’s group shoots up to fourth place at 20.7 WAR.

Returning to the present day club, the Yankees will be forced to extract a lot of value from the rest of the team. This year’s infield isn’t looking particularly bright, with health, age, and depth concerns. Sure, Jeter could be a .300 hitter, Teixeira could hit 30 homers, Johnson could be a serviceable starter, and Roberts could stay healthy. Chances are, however, that the end results are closer to what the projections indicate. The good news is that the outfield and rotation look strong, hopefully making up for the infield’s deficiency.