After he left Saturday night’s game with an elbow injury, the Yankees officially placed Ivan Nova on the disabled list yesterday with a torn Ulnar Collateral Ligament. Nova’s likely to be out of action for at least a few months — possibly much longer if he needs to undergo the dreaded Tommy John Surgery. In any event, Nova’s injury is a devastating and unexpected blow for the Yankees.

Pitcher injuries are quite possibly the flukiest aspect of baseball: They happen frequently and often with little notice. But in Nova’s preceding starts, there were some signs that something may have been amiss. For one thing, he wasn’t throwing quite as hard as he was last season. Nova lost 1 MPH off of his four-seam fastball between this year and last, averaging 93.3 MPH this year, compared to 94.3 in 2013  and 94.2 last April. 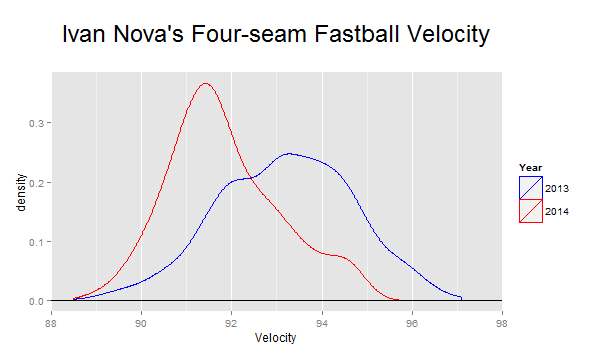 More stark than his velocity dip, though, is the shift in his release point. From the get-go of the 2014 season, Nova was releasing the ball about 2.5 inches lower than he had in the past: 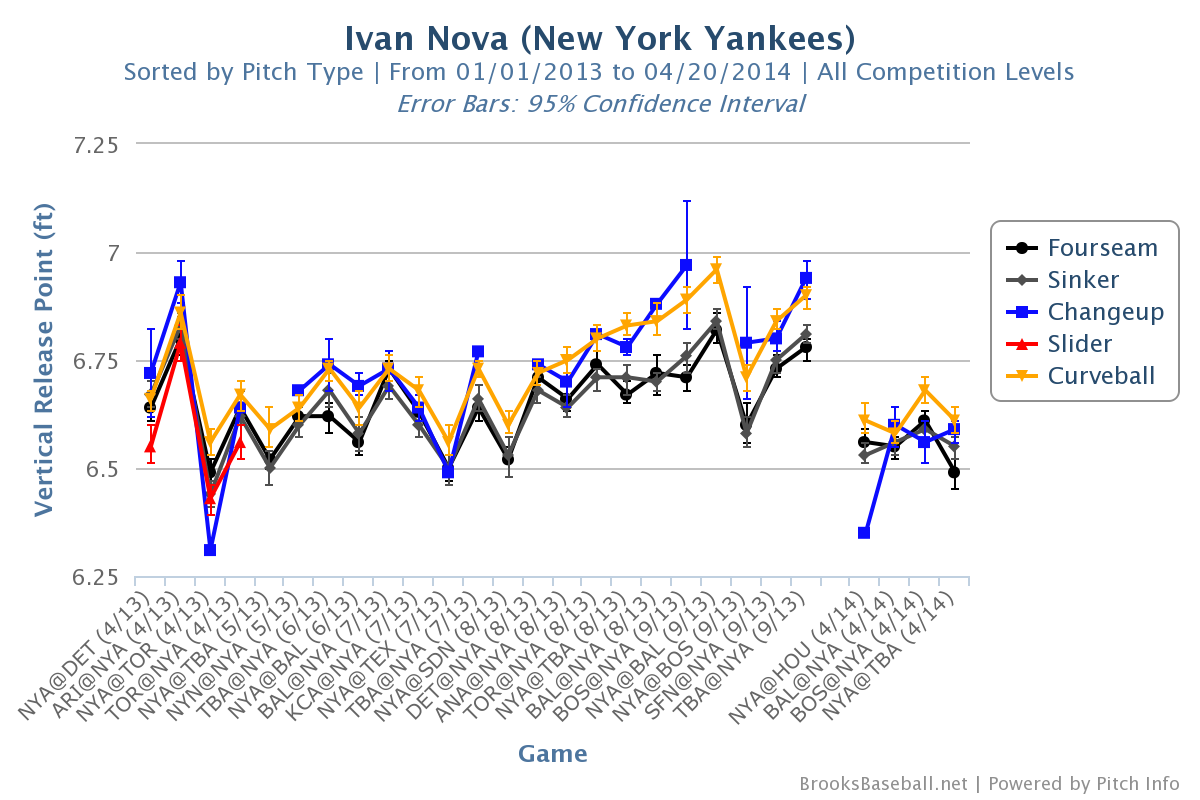 Of course, it’s impossible to say for sure if these changes had anything to do with his injury. All pitchers lose velocity as they get older, so Nova’s drop could have been purely due to aging. And the new release point could be nothing more than a harmless tweak to his throwing mechanics. Still, it’s curious that Nova came up lame so soon after these changes took place — especially considering they coincided with such a poor performance.

Even if these trends were a sign of things to come, its hard to argue that the Yankees should have handled Nova differently. I suppose its possible that Nova’s injury was the result of wonky mechanics that led to his lower release point, but that’s probably a stretch. The somewhat more likely scenario is that Nova’s injury caused these trends. If that was the case, maybe the Yankees could have minimized his rehab time by catching the tear before it got any worse, but by that point, much of the damage was likely already done. Besides, sending a pitcher for an MRI with every velocity blip or change in release point feels like overkill.

PITCHF/X data can reveal a lot about a pitcher’s velocity and mechanics, and in certain cases, can be an early indicator of an injury.  Nova’s injury may have been one of those cases. Although not entirely conclusive, Nova’s release point and velocity readings indicated something was slightly amiss long before he was forced to leave Saturday night’s game.

Chris works in economic development by day, but spends most of his nights thinking about baseball. He writes for Pinstripe Pundits, and is an occasional user of the twitter machine: @_chris_mitchell
View all posts by Chris →
This entry was posted in Analysis, Injuries and tagged Ivan Nova. Bookmark the permalink.