In case you hadn’t heard, Masahiro Tanaka‘s gotten off to a great start to the 2014 season. Through five starts, he owns a 2.27 ERA backed by an impressive K:BB of 46:6 (7.67) — the seventh highest in baseball. Tanaka’s been unequivocally excellent, but if he’s shown one weakness, it’s been his propensity for allowing the long-ball. With five home runs allowed so far, and has yielded a homer to 3.6% of the batters he’s faced. On it’s face, Tanaka’s home run rate isn’t all that unusual — not too far off from the league average of 2.4%. What is unusual, though, is that he’s allowed these dingers without yielding many fly balls. Just 31% of balls put play have been fly balls, but nearly one in five (19.6%) of those fly balls have left the park this year.

We shouldn’t take Tanaka’s observed HR/FB rate too seriously, though. The metric tends to be all over the place in small samples, and takes about seventeen times* as long to stabilize as a pitcher’s ground ball rate and fly ball rate. For the most part, pitchers don’t have much control over their HR/FB rate, and all tend to cluster around the league average of 10% — well below Tanaka’s 19.6% mark. Here’s the distribution of HR/FB rates for all pitchers since 2002 who have yielded at least 400 fly balls — the threshold at which the stat reaches a split-half reliability of 0.70. 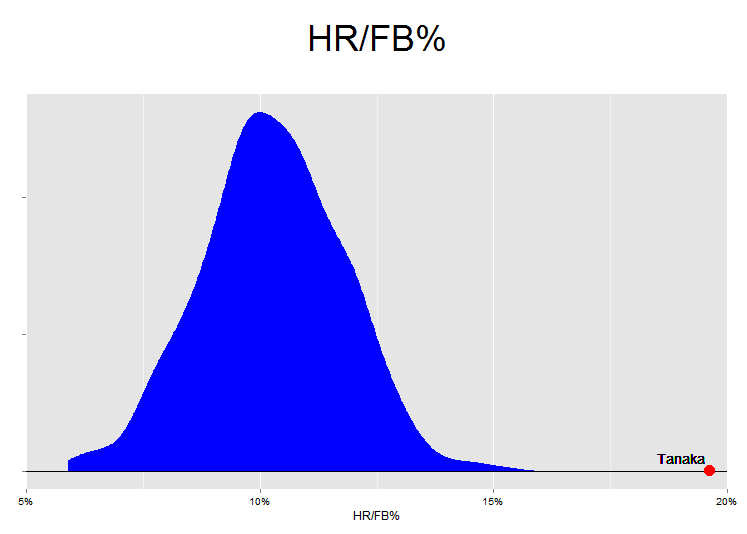 Tanaka’s HR/FB rate doesn’t come close to even the most extreme outliers. As good as he’s been, Tanaka’s actually been quite unlucky with fly balls leaving the park, and like every pitcher in baseball, we can safely assume his HR/FB will regress to something in the neighborhood of 10% or 11%. From this point on, home runs shouldn’t be nearly as big of an issue for Tanaka. He’s been doing decent job of keeping the ball out of the air, and its only a matter of time until lady luck does a better job of keeping the ball in the park.