Of the seven pitches Masahiro Tanaka offers, one stands out above them all: the splitter. That isn’t to say the rest of his arsenal is mediocre, but the split is Ma-Kun’s calling card. It hasn’t taken long to see that he is capable of confusing opponents with the diving pitch, one that some have called the best of its kind in the world. To be fair, the splitter isn’t a particularly popular pitch nowadays. Yet, what we’ve seen from Tanaka is a pitch that has been difficult for batters to square up.

The results with the pitch have been outstanding. Per Brooks Baseball, Tanaka has generated 16 swings and misses on 45 splitters (35.56%). No, that’s not sustainable, but it’s probably safe to say hitters will still feel the breeze frequently against it going forward. It’s been put into play nine times, only twice in the air (one being a Melky Cabrera homer). Indeed it is a small sample, but we were expecting Tanaka to dominate with it. Moreover, aside from scouting reports, PitchF/X supports his split-finger’s brilliance. Because a pitcher’s release point and velocity don’t go through random variations (i.e. Tanaka doesn’t randomly throw 102 MPH), conclusions can be made from PitchF/X data rather quickly. 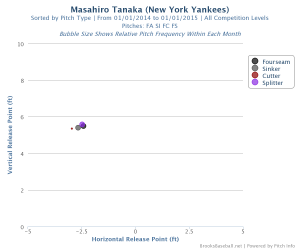 Like most pitches, a splitter’s intent is to deceive. Simply put, a good split is one that appears to be a fastball out of the pitcher’s hand, only to disappear late in its trajectory to the plate. To accomplish this, similar arm action and release point is essential with the two offerings. Major League hitters will quickly pick up on subtle differences in motion and thereby be able to decipher between the two at release. 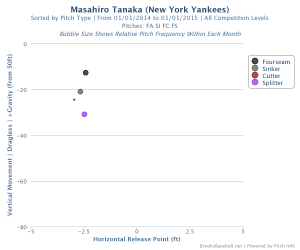 Although PitchF/X can’t tell us a pitcher’s arm speed, it can illustrate the release point. By this measure, Tanaka’s split is virtually indistinguishable against the rest of his fastball-type offerings (four-seamer, cutter, and sinker). The four-seam fastball and splitter overlap, while his sinker and cutter are a mere inches away, likely unnoticeable differences to the hitter. This is an ideal feature of Tanaka’s split, but not everything to it. Movement and velocity are contributors to its effectiveness, too.

Tanaka’s high-velocity pitches all move differently. The chart above plots how far his fastball-type offerings drop relative to his horizontal release point. The split (pink dot) makes the most dramatic drop downward of the group, as expected. Most importantly, it plummets significantly below it’s main buffer, the four-seamer (black dot). And again, with a consistent throwing angle, it’s hard for any batter to know where any of these four are destined. Plus, with a five to six MPH difference against the fastball, the split can act like a changeup, increasing the probability of a whiff.

The eye-test, PitchF/X, and outcome statistics confirm the nastiness of the split-finger we’ve been anxiously waiting to see since Ma-Kun signed. Basically, the best chance for a hitter against a well executed Tanaka splitter is to know it’s coming. The early results are exciting, but it’s truly the mechanics behind the pitch that speak most to its excellence. He may only be two starts into his career, but it’s easy to see why the Yankees envisioned Tanaka blossoming at the top of the rotation.

This entry was posted in Analysis and tagged Masahiro Tanaka, Pinstripe Alley. Bookmark the permalink.