If you’re a hard-core baseball fan and have never played Out of the Park Baseball, I highly recommend you do so. OOTP is the best baseball simulator out there — hands down. What separates OOTP from the rest of the field is the level of detail available in the franchise mode. It has just about everything anyone could want: The ability to start a franchise from any year with any team, full minor-league rosters and lineups equipped with real players, and they even added real-life international players to this year’s version.If this game has one major flaw, it’s that the it’s so darn addicting. In fact, I toyed with not buying this year’s version in order to protect my productivity and social life. In the end, though, I inevitably caved. I just had to. Besides, who needs a social life when you can lose yourself in a magical, simulated land filled with endless lineups, transactions, and real international players?Like I do every year, I chose to first experience this fantasy land with the New York Yankees. As a die-hard Yankees fan, I wouldn’t dream of popping my OOTP cherry with any other team.Mere seconds after I began simulating, I was alerted that Brian Roberts would need to miss seven weeks with hamstring strain. Frankly, this outcome seems more realistic than the relatively healthy April from real-world-Roberts. The injuries didn’t stop there. Derek Jeter fractured his kneecap in May, effectively ending his career; while Beltran, Robertson, Sabathia, Ellsbury, and Pineda all spent time on the DL in the first half. Combined with replacement-level play from Brian McCann, Alfonso Soriano, and David Phelps, this left the Yankees hovering around .500 for the first two months.In an effort to sure up the roster without mortgaging the future, I made some moves in early June. I dealt Austin Romine for Mike Olt — a promising, young third baseman who was ready to contribute immediately; and Slade Heathcott for starting pitcher Chris Archer. Things only got worse, though, and by late June, the Yankees found themselves 38-41 — 10.5 games out of first. With so much ground left to make up, and multiple players slated to miss significant time, it was time to start selling.I promptly started selling off everything that wasn’t tied down, trading Hiroki Kuroda, David Robertson, Kelly Johnson, Alfonso Soriano, and Brian Roberts. In return, I netted Marcus Stroman, Robbie Erlin, Kelly Dugan, Chad Bell, and Erik Komatsu — all of whom would be ready to contribute in the next year or so,  just in time for my next World Series run.From that point on, all I could do was ride out the remainder of the season. I was very active in pursuing international free agents, which kept things interesting, but the on-field product was just terrible. As if I hadn’t suffered enough, CC Sabathia  needed to undergo Tommy John surgery, putting him out of action until 2016. Here’s how the Yanks performed: 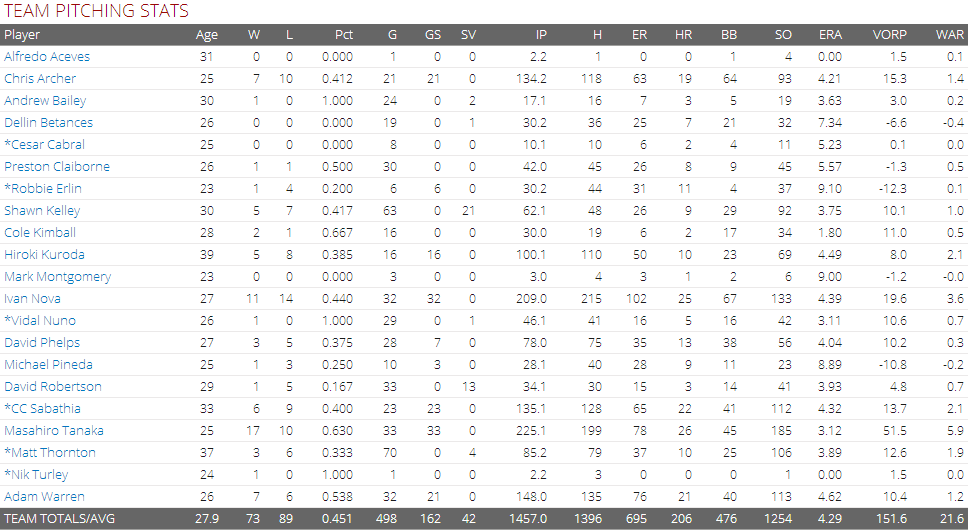 All in all we ended the year a disappointing 73-89. No doubt 2014 was a disappointment, but there’s reason to be optimistic about the 2015 Yankees. Much of last year’s core is still intact, and the remaining gaps can be filled by the newly restocked farm system along with a few key free agent acquisitions.

Chris works in economic development by day, but spends most of his nights thinking about baseball. He writes for Pinstripe Pundits, and is an occasional user of the twitter machine: @_chris_mitchell
View all posts by Chris →
This entry was posted in Other. Bookmark the permalink.