Last week, Fangraphs’ Carson Cistulli examined some of the most improved pitchers by projected WAR, focusing on the daily updated ZiPS projections in comparison to its preseason forecasts. Today, a similar exercise for Yankees’ position players. By comparing ZiPS’ rest of season (RoS) wOBA estimates against the preseason projections, we can find out ZiPS’ opinion on certain players’ current talent levels have changed from the start of 2014.

No surprise to see Solarte on the top of this list. ZiPS certainly thinks a bit better of Solarte after a month of play, but still forecasts him to be a slightly below average hitter. He’s been the benefactor of BABIP fortune (.344), which should come down given time. For what it’s worth, Solarte’s BABIP in Triple-A was .294 (1,145 plate appearances). ZiPS also foresees his walk rate crashing to 5.7% the rest of the way, compared to his stellar 12.9% present mark. The remaining .309 wOBA projection would bring his current .381 wOBA down to .320 by the end of the season.

It’s been just 44 trips to the dish for Teixeira, yet enough opportunities for ZiPS to expect the switch-hitter to perform much better than he did in 2012 (.345 wOBA). That would be a pleasant surprise given that Teix has been in a steady offensive decline since joining the Yankees. If the RoS projection holds true, Teixeira would finish with a .358 wOBA. Although the system still thinks well of his bat, the recent litany of injuries leaves it estimating Mark to play in just 68 of the team’s remaining 137 games.

Beltran has transitioned seamlessly into pinstripes, particularly with the bat. ZiPS was a bit down on Carlos prior to opening day, perhaps because of a roughly 4% drop in walk rate and .032 fall in ISO from 2012 to 2013. Now, after nearly 100 plate appearances, ZiPS is a bit more confident in Beltran’s offensive talent level. A .352 wOBA through the rest of the campaign would give Beltran a .353 mark by season’s end.

On Friday, I speculated about McCann pressing at the plate. Earlier in the spring, Chris wondered if McCann’s poor Grapefruit League performance might mean anything in the regular season. In the early going, ZiPS has taken McCann’s slow start to heart and estimates a bit of a hitting talent dip. The lack of walks and power have McCann’s wOBA standing at .289 right now, but the RoS projection would pull that mark up to .329. That’s still very good for a catcher, but a significant fall from prior seasons.

ZiPS doesn’t think much of Roberts as a hitter now nor before the year began. Such a small change probably doesn’t mean much, but this kind of performance may jeopardize Roberts’ candidacy as a starter and maybe even his hold on a roster spot. The remaining forecast would bring his paltry .273 mark to .288.

It’s only 17 plate appearances, and a .001 change is virtually meaningless. Cervelli was off to a slow start before getting injured (.223 wOBA), but it was probably nothing more than a random variation.

The good news is that ZiPS updated wOBA projections had 13 of 16 players improve, and only the aforementioned three decliners. The total results: 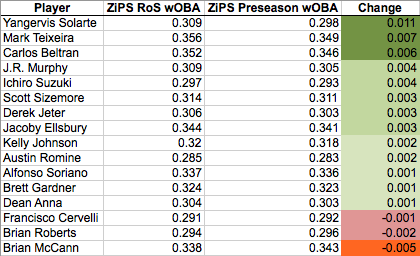