In late 2013, for the second season in a row, Hiroki Kuroda‘s performance faded as the year came to a close. This raised fair questions about his viability as a front of the rotation starter entering 2014, especially considering his age. Getting off to a slow start in 2014 has further fueled the narrative, making the Yankees’ rotation feel extremely thin given the plethora of injuries. Nonetheless, there’s evidence that Kuroda still has a few bullets remaining.

Back in November, Chris analyzed Kuroda’s fall in the second half of 2013, and concluded the following:

Although Kuroda has come out of the gate slowly, there are still some indications that bad luck has victimized him. Examining his final eight starts of 2013 plus all ten this season or solely his outings this calendar year point to the same conclusion: Kuroda may still have something left in the tank.

Hiroki’s peripherals are still right around where they stood in his peak with the Yankees. The strikeouts haven’t wavered much, walks allowed have improved, and ground balls induced has remained solid. But the numbers he has less influence over? Big changes. Home runs allowed, home run to fly ball ratio, LOB% (left on-base percentage), and BABIP have all been far more unfavorable than Kuroda has been accustomed to.

It’s hard to make sense of all these factors suddenly going against Kuroda. Drilling deep into his BABIP jump, his rate allowed on grounders is .266 this season. In 2013 and 2012, it was .205 and .212 respectively. Not much has changed on line drives and fly balls. With such a big difference year-over-year, opposing hitters have experienced some fortune on the ground. The Yankees’ porous infield defense can’t be discounted, however. It seems like the infield produces one bad result every game, magnifying the loss of Robinson Cano and the effect of Derek Jeter in the field.

To some extent, Kuroda’s BABIP increase has hurt his percentage of stranded runners. Nonetheless, it’s hard to buy that BABIP is solely the reason for a roughly 15% decline in strand rate. Seeing that his strikeouts, walks, and grounders are still solid, he’s probably just run into some unfortunate timing of hits allowed with men on base. Infield defense must also be considered to some extent. Putting it another way, Kuroda’s ability as a pitcher doesn’t suddenly worsen when a runner gets aboard.

Homers allowed is the biggest head-scratcher. A ground-ball pitcher like Kuroda wouldn’t be expected to allow more dingers while his ground ball rate remains steady, yet, this is what happened to Hiroki. His home run to fly ball rate is way up, inflating Kuroda’s ERA and FIP. This season, six of the nine long balls Kuroda has surrendered have been on the sinker. Last year, he allowed just nine total home runs on the same pitch. Maybe he’s lost some life on the pitch?

Since 2012, velocity on the pitch is down a mere .3 MPH, and the vertical movement on the offering does not signal decline. For a 39 year-old, one would expect a drop-off from two seasons earlier. This is good news. 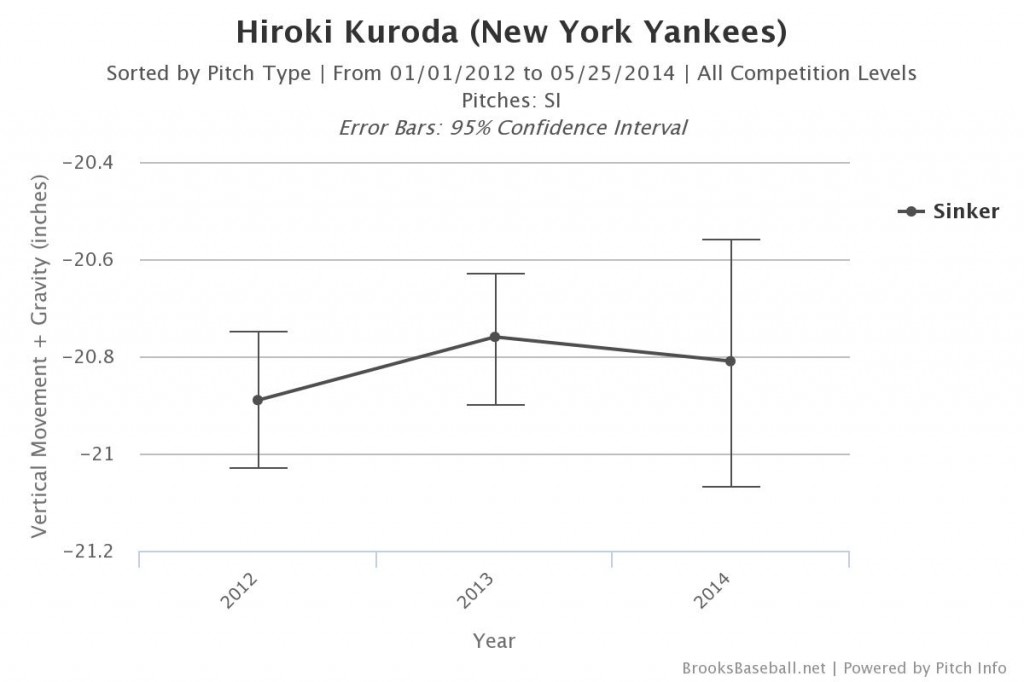 Location of the pitch is another story, however.

The darker red hexagons represent frequency of location, and it is clear Kuroda’s sinker has been left over the heart of the plate more often in 2014 than the prior campaign. This is my one main worry about Kuroda at the moment, because almost everything else points to some extent of misfortune. I’m not ready to say he’s lost his skill to pinpoint the pitch, because it is still a sample of ten 2014 starts. In his rough finish to 2013, his precision on the sinker was still very good. For now, though, his home run spike makes sense because of the poor location.

I believe that we haven’t seen the last of Hiroki Kuroda as a second or third starter. There are positives to be seen in his K%, BB%, and GB%, while there are some intimations of bad luck within his BABIP and LOB%. The homers are perhaps the largest issue at the moment, but at least it isn’t because his “stuff” has worsened. I haven’t yet lost faith in his capability to locate the pitch, although it’s worth paying attention to going forward. Lastly, it wouldn’t hurt to have a better infield defense behind him, either, but that is something Kuroda will have to work with in 2014. Without CC Sabathia, Ivan Nova, and Michael Pineda for a large chunk (or all, in the case of Nova) of 2014, the Yankees need Kuroda badly. Luckily for the team, it looks like all hope isn’t yet lost.