Many of the Yankees’ regulars have scuffled so far in 2014. Carlos Beltran, Derek Jeter, Brian McCann, Brian Roberts, and Alfonso Soriano have all struggled out of the gate, which has held back the team’s offense. Six weeks in, the Bombers rank seventh in the American League in runs scored. Not terrible, but a bit of a let-down given some of the names in their lineup. Several players have fallen short of pre-season expectations thus far, but third baseman Yangervis Solarte has exceeded them by a wide margin.

Even for die-hard baseball fans, Solarte was a complete unknown three months ago. The 26-year-old had never managed to crack the majors, and frankly it’s not hard to see why. Solarte spent the last two years playing for the Round Rock Express — the Texas Rangers’ Triple-A affilliate — in the hitter-friendly Pacific Coast League. Yet despite the favorable offensive environment, Solarte only managed to hit a tepid .282/.332/.404. To put his performance in perspective, 15 players logged at least 150 plate appearances for the Express last season, and Solarte ranked 13th in wOBA. Not only was Solarte a career minor leaguer, but he wasn’t even a good one. He was just another face in the minor league crowd.

But after an impressive spring training, and in injury to Brendan Ryan, Solarte beat out Eduardo Nunez for a spot on the Yankees’ Opening Day roster and hasn’t looked back. Through 33 games, Solarte’s been easily the team’s best hitter, slashing .336/.414/.521 and amassing a 157 wRC+ — tops among qualified third basemen. Solarte’s BABIP currently sits at .356, so some of his success has been driven by lucky bounces on balls in play, but not all of it. He’s one of only 14 players in baseball who’s managed to walk (12.1%) more than he’s struck out (11.4%). Strikeout and walk stats stabilize pretty quickly, which sparks hope that Solarte’s breakout might be for real.

It’s hard to fluke into good strikeout and walk numbers over a six week stretch, but those numbers could certainly crater if pitchers find ways to exploit Solarte’s weaknesses. But based on what we’ve seen so far, there don’t seem to be many holes in Solarte’s approach. Although he doesn’t have the keenest eye, Solarte is far from a hacker, and has shown decent ability to lay off pitches out of the zone. Solarte has swung at 63% of pitches in the zone and just 27.7% of pitches outside of it — both slightly below the league average

Where Yangervis has really excelled has been putting the ball in play. He’s been particularly adept at connecting at pitches in the zone, which explains why he’s struck out so infrequently. Solarte’s made contact on 96% of the balls he’s swung at, placing him 9th out of 179 qualified hitters. He’s been no slouch on pitches out of the zone either, where his 77% contact rate ranks 30th out of 179. It’s not like this is coming completely out of nowhere, either, as he struck out just 9.9% of the time in 1,145 PA’s in 2012-2013. Solarte’s always been a high contact guy. 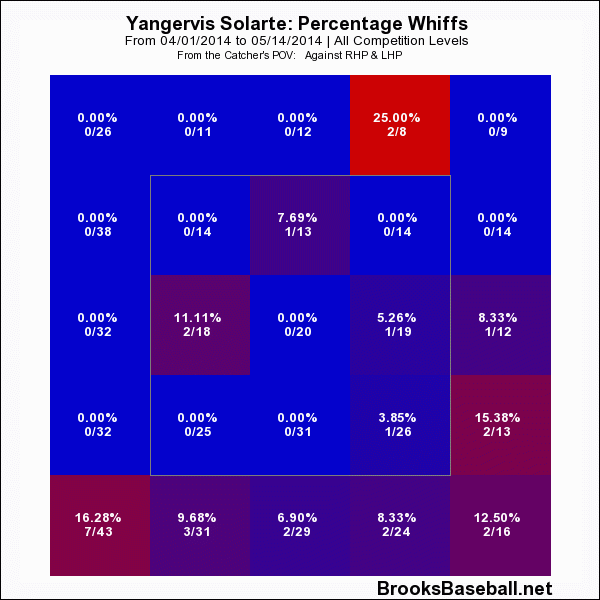 Ok, so Solarte’s shown some ability to put the ball in play. You might be wondering what’s going to happen when pitchers stop throwing him fastballs. Surprisingly, it looks like that’s already happening — and Solarte’s been unphased. Just 54.1% of the pitches thrown to Solarte have been fastballs, a good bit below the league average of 58.4%. And although the sample’s tiny, Solarte’s hit .333/.385/.479 in 52 PAs that have ended in something other than a fastball –including a ridiculous .435/.480/.783 line in 25 PAs against breaking balls.

Solarte’s bound to come back to earth at some point. Not only is his BABIP trending high, but his 11.8% walk rate smells a little fishy as well. He was never much of a walker in the minors, and lacks the mix of power and plate discipline to post double digit walk rates. Still, he’s a player who can put the ball in play — and can do so while hitting for a non-negligible amount of power. There’s no way that Solarte will continue being one of the best hitters in baseball, but I could very easily see him hitting .275/.325./400 from here on out, which would make him roughly a league-average hitter. That’s nothing special, but is more than adequate for a third baseman — especially when the likes of Mike Moustakas (42 wRC+) and Marcus Semien (68 wRC+) can hold down starting gigs. One way or another, the Yankees found a diamond in the rough in Solarte. He was just some obscure minor leaguer three months ago, but today it’s clear that, at the very least, he’s worthy of a big league roster spot.

Chris works in economic development by day, but spends most of his nights thinking about baseball. He writes for Pinstripe Pundits, and is an occasional user of the twitter machine: @_chris_mitchell
View all posts by Chris →
This entry was posted in Analysis and tagged Yangervis Solarte. Bookmark the permalink.