At some point in their baseball lives, the majority of Major League position players called themselves a catcher or a shortstop. These are the most difficult defensive positions, and from little league on up, they tend to be filled with the best and most athletic players on the team. Since Major League Baseball players are the best of the best of the best, it shouldn’t come as much of surprise that most got their start at one of these premium positions. These players were big fish in a small pond, but with each new level of competition, the ponds grew a little bigger; and somewhere along the line, most were no longer the best player on their team. As a result, they were moved to a less premium position in favor of a more defensively skilled teammate.

Of all MLB players who played at least 60 games at a single position in 2013, 39% primarily played either catcher or short in their first year in the minors. This is definitely an out-sized share, considering catcher and short make up just 25% (two out of eight) of baseball’s positions. 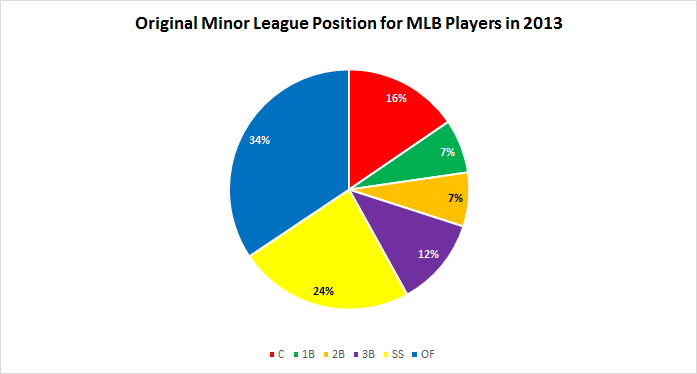 Here’s what this looks like broken out by MLB position. For players with 60+ games at multiple positions, I only included the position at which he played the most games.

What really stands out to me is how few second baseman, third baseman, and shortstops end up staying at their positions. Less than half (47%) of MLB players who started out at one of those spots were still manning that position last year. Of the other 53%, about half shuffled between the three positions, while the rest moved elsewhere — most frequently to the outfield.

There’s also a dearth of current first, second, and third basemen who started out at those positions. Just 46% of last year’s non-shortstop infielders — 49 of 106 — played their current positions when they debuted in the minors. Many of the others are castoffs from other positions who couldn’t quite hack it at their original defensive assignments. In particular, a 43% of second and third base jobs were filled by erstwhile shortstops.

Very few players remain at one position for the entirety of their careers. Most end up sliding down the defensive spectrum, often before even reaching the big leagues. Last year, 28% of all MLB position players — and 21% of rookies — were no longer playing their original positions. This is worth keeping in mind during the amateur draft next week. When you see a team draft a position player, don’t automatically pencil him at the position long term, especially if he plays one of the non-1B infield positions. Unless he’s a top notch defender, there’s a decent chance he’ll end up moving down the defensive spectrum sooner rather than later.

Chris works in economic development by day, but spends most of his nights thinking about baseball. He writes for Pinstripe Pundits, and is an occasional user of the twitter machine: @_chris_mitchell
View all posts by Chris →
This entry was posted in Analysis, Around the League, Other. Bookmark the permalink.