Yankees’ prospect Pete O’Brien has been killing it this year. The 23-year-old has clubbed 17 homers so far — more than any minor leaguer other than Joey Gallo. All told, O’Brien’s mashing to the tune of .316/.339/.722 in 165 plate appearances between high-A Tampa and double-A Trenton. O’Brien appears to be blossoming into a promising hitting prospect, but is still looking for a home defensively. Originally a catcher, the Yankees seem to be slowly giving up on him at as a backstop after just 129 games at the position. That’s probably not a bad idea considering he’s allowed an alarming 36 passed balls — twice as many as Jorge Posada‘s highest single-season total. The Bombers also tried him out at third base last summer, but that experiment came to an end after 18 errors in 38 games. This year they’re trying him out  at a new position — right field — where he’s logged 9 games so far.

Unfortunately, O’Brien’s probably not cut out to be a plus outfielder, either. Good outfielders tend to be fast and speed just isn’t a part of O’Brien’s game. Although he has a strong throwing arm that should come in handy in right field, much of an outfielder’s defensive value is reliant on speed — even in the corners. Looking at all big-league seasons by a corner outfielder with at least 1,000 innings, speed score* correlates fairly well with UZR. Every one point in speed score correlates to roughly 3.1 runs saved over a full season. 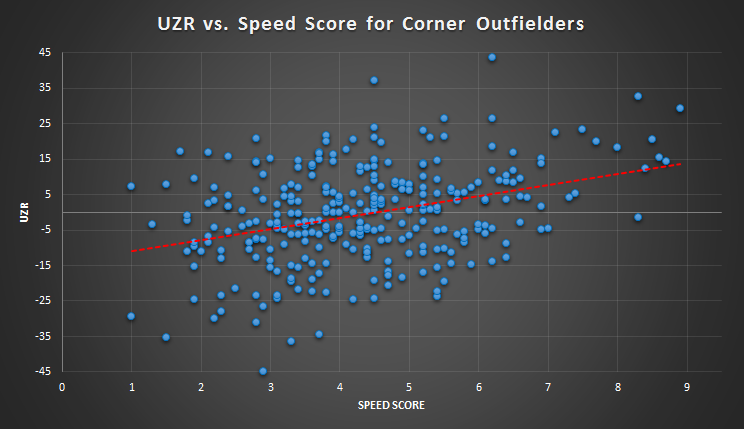 Clearly, a decent portion of an outfielder’s defensive value is reliant on speed, which doesn’t bode well for O’Brien and his 6’4″ 225 lb. frame. This year, O’Brien’s speed score sits at 2.8, which correlates to a -5.3 UZR from a corner spot. Since 2002, 96 corner outfielders have had a speed score of 3.5 or lower, and 66 of them (69%) have posted a UZR in the negatives. And once you factor in positional adjustments, which “penalize” these players for playing an “easy” position, 85 of the 96 (89%) were below average defensive players.

When you consider he’s only likely to slow down with age, the odds of O’Brien becoming anything other than a liability in the outfield look pretty slim. Of course, that’s not to say he’ll never be a useful player. Plenty of hitters have had long and productive careers while providing little on defense. But to follow that career trajectory, it’s critical to be an above-average major league hitter — something that few players are able to do.

O’Brien has put on a show in the minors, but is still far from a lock to be a star major leaguer — or even a mediocre one. A classic example of a one-dimensional player, O’Brien’s entire future lies in his bat. That might be enough to carry him based on what we’ve seen in 2014, but his offensive game isn’t without red flags. Although he’s hit for loads of power, he’s still struck out 39 times this year (23.6% of PA’s), while drawing just four unintentional walks (2.4% walk rate). Obviously, the 17 homers outshine these flaws by a long-shot, but those rates would be alarming otherwise. It remains to be seen if he’ll develop the plate discipline to go along with his monster power. Thanks to his defensive shortcomings, O’Brien needs to continue raking in order to carve out a role in the big leagues. That might happen, but anything less and he’ll be nothing more than a platoon-type with no real position — think Shelley Duncan, Steve Pearce, Mark Reynolds, or Jesus Montero.

*Speed score is a metric developed by Bill James to estimate a player’s speed based on Stolen Base Percentage, Frequency of Stolen Base Attempts, Percentage of Triples, and Runs Scored Percentage. Statistics courtesy of Fangraphs and Baseball-Reference.

Chris works in economic development by day, but spends most of his nights thinking about baseball. He writes for Pinstripe Pundits, and is an occasional user of the twitter machine: @_chris_mitchell
View all posts by Chris →
This entry was posted in Analysis, Prospects and tagged Pete O'Brien. Bookmark the permalink.