It’s no secret that CC Sabathia‘s performance has been on the decline these past few years. Since 2011, his ERA’s risen from 3.00, to 3.38, to 4.78 last year. Although his fastball velocity’s been trending in the wrong direction, most of his vital peripherals have been relatively constant over this time. His strikeout and walk rates have gone unchanged, as have his ground ball and fly ball frequencies. What has changed, though, is what’s been happening to those fly balls. From 2009-2011, just 8% of Sabathia’s fly balls turned into home runs, but that ratio’s been on the rise ever since, reaching 13% last season and 23% in this year’s small sample of games.

Its been statistically proven that pitchers have very little control over their home run to fly ball rates, and it’s generally safe to assume that any given pitcher will see his rate converge toward 10% in the long run. But Sabathia’s HR/FB trend is pretty stark. It may be due in part to random variation, but it’s hard not to think that something else is at play here. Perhaps it has to do with his lost velocity, and perhaps not, but whatever the case, it’s pretty clear that something about CC Sabathia’s fly balls have changed.

After spending the last three years watching more and more balls leave the park, Sabathia adopted a new strategy this year: Allow fewer fly balls. Of all of Sabathia’s pitches, his fourseam fastball ends up in the air most often. But this year, he’s throwing it much less frequently than ever before.

Sabathia’s essentially swapped out a huge chunk of his fastballs with sinkers. While his fastball generates fly balls, CC’s sinker generates grounders. Over the last two seasons, a Sabathia sinker ended up on the ground nearly twice as often as his fastball, and was about two thirds as likely to turn into a fly ball. 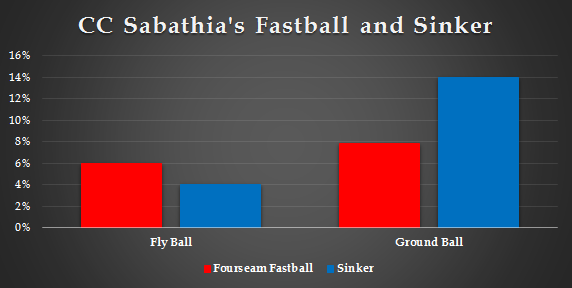 Out of necessity, Sabathia’s re-invented himself this year. He’s no longer a guy who will pound the zone with fastballs, but will instead look to induce more grounders by leaning on his sinker. For the first time in his career, more than half of Sabathia’s balls in play (53.3%) are going for grounders, and he’s currently sporting a career high 2.2 GB/FB rate — nearly double his career mark of 1.3. It’s still a bit early to tell if these changes will help Sabathia buck the troubling performance trend from the past few years, but this was a change he needed to make. Home runs had become a serious problem for CC, and keeping the ball out of the air is the best way to keep it in the park.

Chris works in economic development by day, but spends most of his nights thinking about baseball. He writes for Pinstripe Pundits, and is an occasional user of the twitter machine: @_chris_mitchell
View all posts by Chris →
This entry was posted in Analysis and tagged CC Sabathia, Pinstripe Alley. Bookmark the permalink.