The other day, I analyzed how the Yankees’ top position player prospects performed in April. Today, I’ll highlight some impressive performances from hitting prospects who weren’t highly regarded headed into the season.

Roller’s off to a torrid start to the 2014 season. Through 14 games, the Trenton Thunder’s first baseman mashed 7 homers, while getting on base nearly half the time.

As a 26-year-old in double-A, Roller has very little upside, but his performance so far is a little hard to ignore. If he keeps it up, he could find his way to triple-A Scranton, where he’d theoretically be just one Mark Teixeira injury away from the big time.  The more likely scenario, though, has him regressing back to his old self: A good, but not great, hitter who’s a few years too old to be considered a prospect. 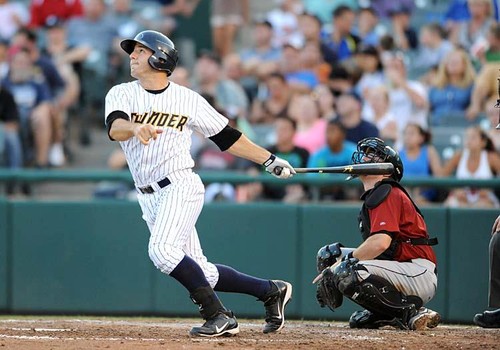 After missing most of 2013 due to a hip injury, Segedin destroyed double-A pitching in 72 April plate appearances. Most impressive has been his 8:15 K:BB ratio.

At 25, Segedin’s pretty old for double-A, but has hit at nearly every minor league stop since he was drafted in the third round back in 2010. Based on his April performance, Segedin may find himself manning third base in triple-A Scranton before long. He’s probably not destined for great things in the big leagues, but could become a decent role player in a year or two.

Fangraphs prospect analyst Nathiel Stoltz labeled Dugas the Yankees’ most underrated prospect in the pre-season, and Dugas has lived up to that billing so far.  After walking twice as often as he struck out in high-A Tampa last season, Dugas posted impressive plate discipline stats in double-A, while also adding a little bit of power to the mix. Dugas’ walk numbers aren’t quite what they were last year — a highly passive approach doesn’t work quite as well in the higher levels of the minor leagues — but he’s still managed to walk as much as he’s struck out.

Dugas is already 24 and is still at least a year away from any sort of big league action. Nonetheless, Dugas is an intriguing player, and it will be interesting to see if his new-found power turns out to be real.

The Yankees drafted Bichette in the first round in 2011 and he rewarded them by hitting .232/.308.331 in over 1,000 plate appearances in class-A Charleston over the last two years. Things have been different this year, though, as Bichette’s actually started hitting following a promotion to high-A Tampa. Bichette supposedly simplified his swing in Spring Training and it seems like those changes may be paying off. The 21-year-old walked as much as he struck out in April — much better than the 3:1 strikeout to walk ratio he posted in 2013. Plate discipline  stats are the most telling in small samples, which makes his performance somewhat believable.

We’ll see if he can continue raking, but he’s already done enough to put his name back into prospect conversations. A mid-season promotion to double-A Trenton could be in order if he’s able to keep up the pace.

Following a dominant performance in the Cape Cod League last summer, the Yankees signed Ford — a 21-year-old first baseman out of Princeton –as an undrafted free agent. Ford promptly reported to class-A Staten Island, where he hit just .235/.346/.374 over 136 PA’s, but posted strong plate discipline numbers. Ford stepped up his game in class-A Charleston this April, posting an impressive .414 wOBA.

As with any undrafted free agent who’s years away from the majors, Ford’s odds of ever making it are very slim, and as a first baseman, he’s going to have to keep on hitting to even sniff the big leagues. Still, he’s someone to keep an eye on and could turn into a fringe prospect if he continues to punish low-minors pitchers.

Chris works in economic development by day, but spends most of his nights thinking about baseball. He writes for Pinstripe Pundits, and is an occasional user of the twitter machine: @_chris_mitchell
View all posts by Chris →
This entry was posted in Analysis, Prospects and tagged Dante Bichette Jr., Kyle Roller, Mike Ford, Rob Segedin, Taylor Dugas. Bookmark the permalink.