As the calendar turns to May, minor league players now have nearly a month’s worth of games under their belts. This isn’t a huge sample — certainly not big enough to make any definitive conclusions — but might be enough to identify some trends that could influence a prospect’s performance going forward.

Here’s how the Yankees top hitting prospects, as ranked by Mike Axisa of River Avenue Blues in the preseason, fared this April. The players are in the order they were ranked in the pre-season and the arrows reflect the player’s statistical performance over the last month:

Following a good-but-not-great 2013 season, the Yankees’ top prospect  seems to have taken a step forward this year. He managed an .399 wOBA in the month of April, which is very impressive coming from a 21-year-old catcher in Double-A.If he keeps hitting like this, he could find himself in Triple-A Scranton by the end of the summer — and should be ready for the show shortly thereafter. With Brian McCann entrenched behind the plate, Sanchez’s future is probably with another organization. Nonetheless, Sanchez’s prospect stock is on the rise and he should net a substantial hall should the Yankees decide to pull the trigger.

Murphy started the year splitting Scranton’s catching duties with Austin Romine, but was called up to the majors to fill in for the injured Francisco Cervelli. Although he hasn’t played all that much, Murphy’s batting line is pretty ugly so far. Of particular concern is the fact that he’s yet to draw a walk in 39 trips to the plate.

Even when he’s not hitting, Murphy’s still a useful player thanks defensive prowess. He’ll continue to serve as the backup catcher until Cervelli’s ready to return to the team, but barring an injury to Brian McCann, probably won’t play more than once or twice a week.

Heathcott spent all of April on the shelf following offseason knee surgery, but should be ready to return in the next week or so. Its always something with Heathcott, who’s missed over two season’s worth of games since being drafted in 2009. Heathcott has gobs of talent, but thanks to all of his injuries, has been playing catch-up on his minor-league development for years now.

Heathcott will probably head to Triple-A Scranton once he’s ready to return. He’s on the 40-man roster, so there’s a decent chance we’ll see him in the Yankees’ outfield before the year’s out. Of course, he’ll have to get (and stay) healthy first.

Austin recently landed on the disabled list with a strained groin, but shouldn’t be sidelined for more than a couple of weeks. The 22-year-old outfielder got into 14 games this month prior to his injury, where his offensive stats strongly resembled those from his tepid 2013 campaign.

Austin hit for plenty of power back in 2012, but recurring wrist problems have sapped his power ever since. Once he’s healthy again, it’ll be interesting to see if he’s able to recoup some of that lost power. Given his defensive limitations, he’ll need to hit for a decent amount of pop in order to have any kind of prolonged big-league career. 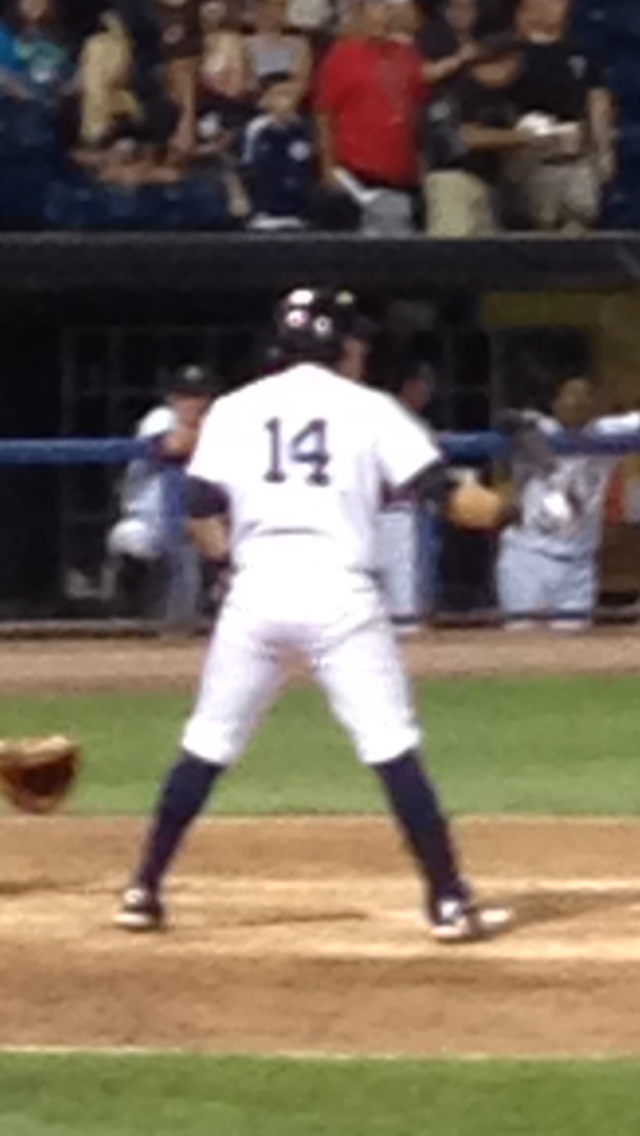 The Yankees first round pick from last year has gotten off to a decent start in his first full season as a pro with class-A Tampa, hitting for a modest amount of power while also drawing a healthy amount of walks, but my biggest concern with Jagielo are the strikeouts. Both this month and last summer, he’s struck out more than you’d like to see from a top prospect in the low minors. Nonetheless, its still a small sample size and his K’s could have something to do with adjusting from aluminum to wooden bats. Its also worth noting that Jagielo made 6 errors in 17 games at third base. Hopefully its nothing more than a fluke, as a move from third base to first base would be a real hit to Jagielo’s future value.

At 22, he’s not particularly young for the Florida State League, and could easily earn a promotion to Double-A Trenton with a strong couple of months.

After a rocky 2013 campaign, Williams is off to an even rockier start this year. His power flat-lined in 2013 and hasn’t bounced back at all in the first month of play. Last year, I chalked up his power outage to offseason shoulder surgery, but his April performance suggests any sort of power may never be part of his game.

Williams is still a decent prospect despite his offensive struggles. He’s a plus-plus defensive outfielder by all accounts, and at age 22, still has time to piece things together at the plate. But after 13 months of anemic hitting, Williams is starting to look a lot like a fourth outfielder.

Although he was drafted in the first round last year, injuries prevented Judge from making his professional debut until this season. Judge has raked in class-A Charleston, walking nearly as much as he’s struck out. Judge’s relative lack of power thus far a little surprising, considering he’s 6’7″, but isn’t overly concerning in just one month of games.

Given the struggles of Heathcott, Austin, and Williams, Judge might be the best outfield prospect in the Yankees system right now. Judge should find his way to class-A Tampa before long, where he’ll face more of a challenge. Historically, there have been very few hitters as tall as Judge, so it will be interesting to see how he develops.

Bird has yet to play a game in 2014 after injuring his back in Spring Training, but should be returning to the field within the next week or two. Bird too missed all of 2012 with a back injury that ultimately forced him to move to first base from catcher. Its obviously very concerning that Bird’s having chronic back issues as a 21-year-old.

When he’s ready to return, Bird will report to class-A Tampa, where he’ll look to build on his successful 2013 campaign.

After tearing up rookie ball last season, second baseman Gosuke Katoh has come crashing back to earth in 2014. The 19-year-old has not taken well to his aggressive promotion to full-season ball, striking out over 40% of the time in April.

All hope is not lost, though. Katoh’s very young for the Sally League, so some adversity was to be expected, and to his credit, he did manage to draw his fair share of walks. Nonetheless, that many strikeouts is unacceptable and he’ll need figure out a way to put the ball in play more frequently going forward.

Unlike Katoh, the 19-year-old Avelino has excelled following an aggressive promotion to the Sally League. Although his batting line isn’t particularly flashy, its still very impressive for a teenage shortstop in full-season ball. It would be nice if he could hit for a little bit of power, but perhaps that will develop down the road as he starts to fill out.

Avelino is supposedly a standout defender who is expected to stick at shortstop long term, which further further amplifies his value. He’s flown under the prospect radar for the last couple of years, but is quickly becoming one of the Yankees’ most promising young talents. Avelino’s still just 19, and I’d expect him to spend most if not all of 2014 in class-A Charleston.

The Yankees aggressively pushed the 17-year-old Torrens to class-A Charleston to open the 2014 season, but he’s been sidelined since April 15th with a shoulder injury. He should return to the lineup any day now.

He got off to something of a rough start in his first nine games, but for what its worth, seemed to show a discerning batting eye.  As a teenage catcher in the Sally League, any modicum of offensive success would be extremely impressive, so it will be interesting to see how he fares once he returns to the lineup.

Almonte belted six home runs in the month of April, but his strikeout and walk rates are both significantly worse than last year’s. The power output is encouraging, but Zoilo’s plate discipline stats are a little concerning –especially considering these stats tend to be the most predictive in small samples.

Almonte’s big league experience and 40-man spot puts him relatively high on the outfield depth chart, meaning he’s just an injury away from the big leagues.

Yet another teenager in Charleston, this 19-year-old third baseman has held his own so far in 2014. Although he never showed much of a batting eye in rookie ball, Andujar has walked a fair amount in his first taste of A-ball, and has managed to do so without striking out a ton.

Andujar’s a bit of a fringy prospect, but if his improved plate discipline proves to be real, he could easily develop into a decent third baseman. Given his age, Andujar will almost certainly spend the entire year in Charleston.

Flores had a blasé 2013 campaign with Double-A Trenton, but has performed better this season with Triple-A Scranton. Flores posted his usual solid plate discipline numbers in April, but actually started to show a bit of power.

Believe it or not, Flores is still just 22-years-old, so he’s still a work in progress, and the fact that he’s able to be a decent hitter in triple-A is fairly impressive. And if he can continue hitting for power, he just might develop into an everyday outfielder. He’s on the Yankees’ 40-man, so with a couple of injuries, Flores could end up making his debut as soon as this summer.

After having a break-out year in 2013, Refsnyder has fallen back to earth a bit in his first taste of Double-A. His strikeout and walk rates haven’t been terrible, but have fallen well short of what he did in 2013. This was to be expected for a relatively punchless hitter reaching the upper levels of the minors: The higher up you go, the better pitchers get better at throwing you strikes.

Although he hasn’t replicated his .800+ OPS from last year, Refsnyder’s put up decent enough numbers for a second baseman. Odds are that Refsnyder will never be a star, but has a good shot of developing into a solid role player.

After an awesome offensive showing between low- and high-A last year, O’Brien has continued to rake upon returning to high-A Tampa. Although his strikeout and walk numbers have been nothing special, O’Brien’s crushed the ball so far, belting a league-leading eight homers in April. The issue with O’Brien is that he doesn’t have a position. After two years of poor defense at catcher, the Yankees tried moving him to third base last year, only to watch him compile 18 errors in 38 games. This year, he’s split time between right field and catcher — where he’s allowed 6 passed balls in 20 games.

One way or another, O’Brien will hit his way to double-A Trenton this summer, but until he finds a position he doesn’t suck at, his odds of developing into a quality big leaguer are slim — especially considering he’ll be turning 24 this season.