On Monday, I examined how ZiPS’ wOBA forecasts had changed for Yankees’ position players. Today, I’ll do a similar exercise, except this time for Yankees’ pitchers using FIP. By comparing ZiPS’ rest of season (RoS) FIP estimates against the preseason projections, we can find out ZiPS’ opinion on certain players’ current talent levels have changed from the start of 2014. Without further delay, here are the top three risers and decliners:

Don’t worry so much about the raw FIP numbers — ZiPS doesn’t have too much information to work with for Betances yet, given that his career as a reliever is still in its infancy. Instead, focus on the more than a third of a run drop in FIP forecast. That’s a huge improvement in talent assessment, much in thanks to Dellin’s awesome 43.2% strikeout rate.

Kelley’s projection has gone from good to even better. He’s been lights out in the first month of the season, and filled in superbly as closer when David Robertson had a short stint on the disabled list.

No one could have confidently guessed what Pineda might do after two years removed from the majors, but he certainly has impressed in the first month. Pine tar or not, Pineda displayed good command and a lively fastball that has averaged 93 MPH and peaked at 97, per Brooks Baseball. Unfortunately, a teres major muscle strain (upper back, near repaired shoulder), will sideline Pineda for almost a month. ZiPS certainly feels better about Pineda after getting some exposure in 2014, but his future performance is again in question with another injury.

Take this change with a grain of salt, not only because he’s out for the rest of the year having Tommy John surgery, but also because he may simply have been damaged goods in April. ZiPS projection took his poor first month without the injury in context, and projected out as if he was going to remain in the rotation.

I’ve already noted that I’m not Phelps’ biggest fan. Unfortunately, he’s now thrust into a more prominent rotation role because of the injuries to Nova and Pineda. Phelps already walks too many batters, and his strikeout rate is sure to drop as a starter. ZiPS is down on the right-hander as well, making the outlook for the Yankees’ back-end rotation a bit bleak.

An astute reader may note that Shane Greene‘s change in FIP is actually 0.01 greater than these two, but I decided to feature Sabathia and Kuroda because of relevance. Both starters have been up and down in the early going, but are needed more than ever with Nova and Pineda going down. The duo’s RoS outlook is still good, but it’s slightly worrisome that ZiPS thinks lesser of them with a month of additional data.

Below, all of the projections: 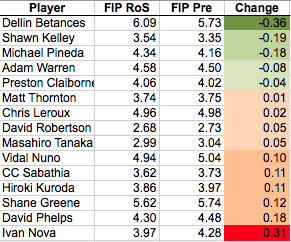