Earlier this week, the Yankees promoted the red-hot Rob Refsnyder to triple-A Scranton. Refsnyder, a 23-year-old second base prospect, was hitting .342/.385/.548 in double-A Trenton — good for an absurd .415 wOBA. The promotion puts Refsnyder just a hop, skip, and a jump away from the Bronx, where incumbents Brian Roberts and Kelly Johnson have combined for -0.1 fWAR by hitting just .226/.301/.360 over 350 plate appearances. If Refsnyder can string together a few more strong weeks at the triple-A level, the Yankees will be hard-pressed to keep him in the minors. He looks to be on the fast track, and could be the team’s primary second baseman as soon as the All-Star break — especially if Roberts and Johnson don’t get their act together soon.

It’s relatively uncommon that a player starts the year in double-A, and then goes on to play a significant role for the big league club down the stretch. Most players spend at least a few months at the triple-A level before making their debuts. Since 1995, there have been just 62 players who have logged at least 200 plate appearances in double-A and at least 100 more as major league rookies. Unsurprisingly, most of these players were raking at the double-A level: Their average double-A wOBA was .379 — a few ticks short of Refsnyder’s .415 pace, but well above the MLB average of .313.

Some of these players played like stars as soon as they arrived, including Mike Jacobs (.449 wOBA in 2005), Erubiel Durazo (.430 in 1999), and Salvador Perez (.362 in 2011). But others fell flat on their faces, like Trent Durrington (.206 wOBA in 1999) and Jake Marisnick (.216 in 2013). On the aggregate though, they were just okay. They averaged a .310 wOBA — certainly acceptable, but in most cases, a far cry from their double-A dominance. Strictly based on how these players have transitioned in the past, Refsnyder’s .415 wOBA can be expected to translate to something like a .327 wOBA in the majors — significantly better than the .295 mark held by Brian Roberts. 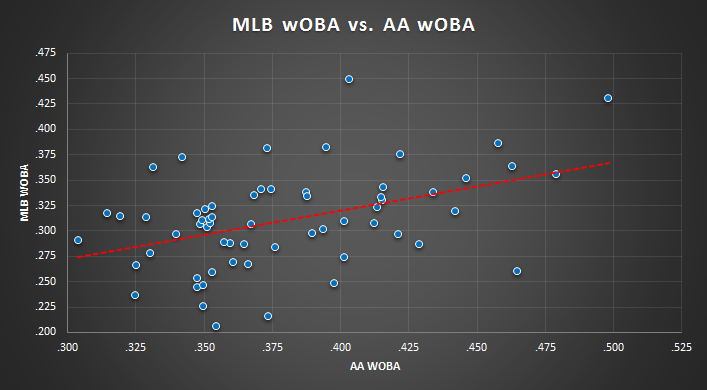 Players who were about as productive as Refsnyder in double-A are also a mixed bag. Chris Davis posted a .422 wOBA in double-A before logging a .375 mark with the 2008 Texas Rangers. While Mike Trout — of all people — wOBA’d a putrid .296 in his first taste of the big leagues despite sporting a Refsnyder-esque .422 mark in double-A Arkansas.

Refsnyder will likely make his debut at some point this season, and could definitely add a win or two to the Yankees’ win ledger. But odds are, he won’t be the silver bullet that solves the team’s infield woes. Hitting big league pitching is a lot tougher than hitting double-A pitching, leading many players to struggle after making the jump. Historical examples like Trout, Troy Glaus, and Adrian Beltre show that even the elite double-A hitters aren’t immune to preliminary struggles. Even so, Refsnyder clearly has some offensive talent, and has earned the opportunity to show what he can do. Even if he’s a bit raw, he can almost certainly out-hit Brian Roberts, and has the upside to do much more than that.

Source: Analysis of data from Fangraphs and The Baseball Cube

Chris works in economic development by day, but spends most of his nights thinking about baseball. He writes for Pinstripe Pundits, and is an occasional user of the twitter machine: @_chris_mitchell
View all posts by Chris →
This entry was posted in Analysis and tagged Brian Roberts, Rob Refsnyder. Bookmark the permalink.