Last month, I looked at how the Yankees’ hitting and pitching prospects performed through the month of April. I’m doing a similar exercise this month, but this time, I’m re-ranking the Yankees’ prospects in the process. Below you’ll find a ranking of the Yankees’ top 10 prospects along with their performances in the first two months of 2014. The arrows represent the prospect’s performance in the month of May. I did not include players currently in the majors, regardless of whether or not they’ve reached the cut-offs for rookie eligibility. So rookies John Ryan Murphy, Dellin Betances, Chase Whitley, and Zoilo Almonte weren’t considered.  Check back tomorrow for prospects 11-20.

After an excellent April, Gary Sanchez’s offensive numbers have cratered over the last few weeks. Sanchez was pretty bad last month, but a good chunk of it likely had to do with his minuscule .215 BABIP. His strikeout, walk, and even power numbers haven’t budged much from his early season performance.

Despite his rough patch, Sanchez is still a very good prospect, especially considering much of the drop-off was due to bad luck more than anything. Still, his season line of .257/.322/.436 isn’t one that screams “blue chip prospect”, even from a catcher. Over his last two seasons (735 plate appearances), he’s hit an un-sexy .253/.321/.413, and we’re still waiting for his bat to take off in the upper-levels of the minors. Sanchez is still young enough to break out, but its starting to look like he may end up becoming a good hitter rather than the great one we had anticipated.

Luis Severino has been nothing short of excellent thus far in 2014. Severino followed up his dominant April with six more impressive starts in May, and now owns a 2.73 SIERA over 50.1 innings.

Severino’s easily one of the Yankees’ most exciting prospects, and has proven that the Sally League isn’t much of a challenge for him. If he continues to dominate, he’ll likely get the bump to class-A Tampa in the next month or two. He’s still at least a couple of years away from the Bronx, but at the tender age of twenty, there’s certainly no rush.

Aaron Judge’s May looked a lot like his April: A high average with plenty of walks, but only modest power. His .311/.404/.486 performance has been driven more by lucky bounces (.381 BABIP)  than the power promised by his 6’7″ frame. The on base numbers are nice – and unexpected – but, with just six homers on the year, Judge’s power output has left something to be desired. Homers or no homers, Judge has hit the ball pretty far this year, and is hitting it to all fields as well: 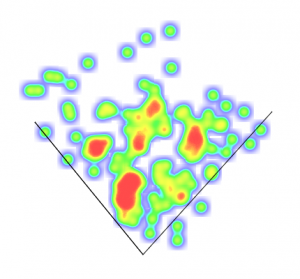 It’s only a matter of time before the power shows up in his stat line. Once it does, he’ll likely head to class-A Tampa for more of a challenge. If he can add power and continue getting on base like he has, Judge could be a pretty special player. 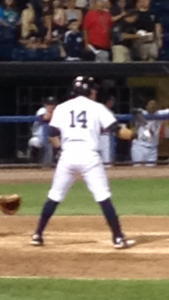 Eric Jagielo was hitting very well before missing the last couple of weeks with tightness in his side. Before his injury, he belted six homers in his last 17 games, bringing his season total to 10. On the downside, his strikeout numbers remain a little concerning.

Jagielo’s hit his share of homers so far, but his plate discipline could use a little work. He’s struck out twice as often as he’s walked both this season and last. He’s been shaky at best at third base, with nine errors in just 30 games, so a move to first base may be in his future. As a college bat, Jagielo was expected to move through the minors in a hurry, but he may not be as polished as the Yankees had hoped. He can definitely hit, but still has some kinks to work out of his game.

After opening the year in extended spring training, Ian Clarkin joined class-A Charleston in early May, and has pitched pretty well in his first six starts. Despite being just a year removed from high school, Clarkin’s managed to whiff more than a batter per inning. Homers have been the one fly in the ointment for Clarkin, as he’s already allowed four in just 27.2 innings. This isn’t all that surprising considering 41% of the balls hit off of him have been in the air.

Scouts rave about Clarkin’s stuff, but he’s still incredibly raw, and years away from the big leagues. The fly balls will definitely be something to keep an eye on, but overall, he’s done about as well as can be expected given his age and lack of experience.

Tyler Austin missed some time with a strained groin this year, and hasn’t hit much in the 35 games he has played in. Although there’s nothing alarmingly bad about Austin’s batting line, his overall performance has been mediocre at best. Most notably, his power has yet to resurface since it went missing in his injury-plagued 2013 season.

Austin’s gotten off to a rough start, but it’s still a small sample size due to the missed time due to injury. Assuming last year’s wrist ailments are behind him, the next few months should serve as a test of his true power potential. It’s also worth noting that the Yankees have been giving him semi-regular reps at third base for the first time since 2011. He’ll have a much better shot at being an everyday player if he’s able to at least fake it at the hot corner.

Mason Williams continues to flounder offensively. The toolsy center fielder now owns an anemic .082 ISO since his injury-shortened 2012 season. His lack of pop isn’t all that surprising given his batted ball profile, which indicates far too many grounders to the right side of the infield. One silver lining is that Mason’s walked more than he’s struck out, but that can only help so much when you’re hitting weak grounders all the time: 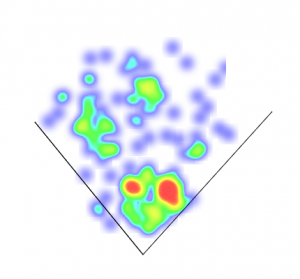 Simply put, Williams just doesn’t hit the ball with any authority, and it’s starting to seem like he’ll never be much of a hitter. He still has his speed and defense to fall back on, but “fourth outfielder” is starting to look more like his ceiling than his floor.

A back injury sidelined Greg Bird until May 10th, but he has hit the ball very well since his return. Bird picked off right where he left off in 2013, by hitting for both average and power while also drawing plenty of walks.

Bird clearly has some offensive talent, but he’s not without his flaws. Its great that Bird’s walked as much as he has, but there’s a good chance his walk rate will plummet once he starts facing more polished pitchers. Without the walks, Bird’s stat line suddenly looks pretty mundane. Health has also been a major issue for Bird, who also missed most of the 2012 and the first month of 2014 with back problems. Thanks to his injury woes, he now plays first base exclusively, which means his entire future lies with his bat.

Another year, another injury plagued season for Slade Heathcott. After returning from offseason knee surgery on May 9th, Heathcott promptly returned to the DL less than two weeks later with “lower body soreness”. In between, he struggled to get going in nine games.

Heathcott averaged just 74 games a year in his first four full seasons as a pro, and it’s not looking like this season will be any different. Slade has tremendous tools, but he’ll have a hard time capitalizing on them if he can’t stay on the field. In addition to his injury issues, Heathcott’s strikeout totals have been higher than you’d like to see from someone with such modest power. It’s hard to blame him for having a raw approach, considering how much development time he’s missed over the years.

Manny Banuelos dominated in five starts with class-A Tampa, but has faced some of adversity since his promotion to double-A Trenton. After a strong first start, Manny was hit pretty hard in his next four appearances before missing two weeks with arm fatigue. He returned to action on Thursday, throwing two innings.

Staying healthy has been a major challenge for Banuelos, who has now thrown just 48 innings over the last three seasons. He seemed to be almost ready for the bigs back in 2011, but considering how little he’s pitched, it’s hard to say how close he is now. Banuelos still just 23 years old, but is looking more and more like future reliever with each injury. Given the Yankees dearth of lefty relievers, and his spot on the 40-man, ManBan could find himself in the big league ‘pen later this summer.

Chris works in economic development by day, but spends most of his nights thinking about baseball. He writes for Pinstripe Pundits, and is an occasional user of the twitter machine: @_chris_mitchell
View all posts by Chris →
This entry was posted in Prospects and tagged Aaron Judge, Eric Jagielo, Gary Sanchez, Greg Bird, Ian Clarkin, Luis Severino, Mason Williams, Slade Heathcott, Tyler Austin. Bookmark the permalink.