Over the last couple of weeks, I’ve been looking into how a players’ stats, age, and prospect status can be used to predict whether he’ll ever play in the majors. I used a methodology that I named KATOH (after Yankees prospect Gosuke Katoh), which consists of running a probit regression analysis. In a nutshell, a probit regression tells us how a variety of inputs can predict the probability of an event that has two possible outcomes — such as whether or not a player will make it to the majors. While KATOH technically predicts the likelihood that a player will reach the majors, I’d argue it can also serve as a decent proxy for major league success. If something makes a player more likely to make the majors, there’s a good chance it also makes him more likely to succeed there.

Things that were predictive for players in low-A and high-A included age, strikeout rate, ISO, BABIP, and whether or not he was deemed a top 100 prospect by Baseball America in the pre-season. However, a player’s walk rate was not significant in predicting a player’s ascension to the majors. Today, I’ll look into what KATOH has to say about players in double-A leagues. For those interested, here’s the R output based on all players with at least 400 plate appearances in a season in double-A from 1995-2010. Due to varying offensive environments in different years and leagues, all players’ stats were adjusted to reflect his league’s average for that year. 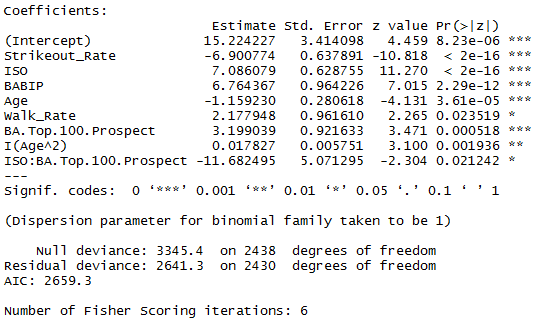 Unlike in the A-ball iterations of KATOH, a player’s double-A walk rate is predictive — albeit only slightly — of whether or not he’ll make it to the show. While walk rate is statistically significant, it still matters much less than the other stats: It takes 3 or 4 percentage points on a player’s walk rate to match what 1 percentage point of strikeout rate does to a a player’s MLB probability.

This version is also different in that there are a couple of significant interaction terms, signified by the last two coefficients in the above output. The “I(Age^2)” term adds a little bit of nuance into how a players’ age can predict his future success. While the “ISO:BA.Top.100.Prospect” term basically says that if you’re a top 100 prospect, hitting power is slightly less important than it would be otherwise. Hitting for power and making Baseball America’s top 100 list both make a player much more likely to make it to the majors, but if he does both, he’s a tad less likely to make it than his power output and prospect status would suggest independently. Put another way, a few top 100 prospects hit for power in double-A, but never cracked the majors — such as Jason Stokes (.241 ISO), Nick Weglarz (.204 ISO) and Eric Duncan (.173 ISO). But virtually all of the low-power guys made it, including Elvis Andrus (.073 ISO), Luis Castillo (.076 ISO), and Carl Crawford (.078). For non-top 100 guys, many more punchless hitters topped out in double-A and triple-A.

By clicking here, you can see what KATOH spits out for all current prospects who logged at least 250 PA’s in double-A as of July 7th, as well as a few that fell short of the cutoff — most notably Joey Gallo, Kevin Plawecki, and Rob Refsnyder. Topping the list is Mookie Betts with a probability of 99.95%, and of course the prophesy was fulfilled when the Red Sox called up the 21-year-old last month. Here’s an excerpt of the top players from double-A this year:

Keep an eye out for the next installment, which will dive into what KATOH says about hitters at the triple-A level.