When 2014 began, bridging the gap to newly minted closer David Robertson was one of the Yankees’ greatest concerns. There were even questions of D-Rob being a capable closer following Mariano Rivera‘s retirement, but that’s a different story that proved to be silly. Fortunately, the bullpen has turned out to be one of the team’s strong points. Dellin Betances has gotten the majority of the credit, but Adam Warren also emerged as a key cog in the late innings.

Through the first two months of the season, Warren was brilliant. Over 30.2 innings, he posted a 1.76 ERA and 2.46 FIP. He was probably pitching a bit over his head, as his 85.4% strand rate and .286 BABIP indicate. Yet, his 23.8% and 6.6% strikeout and walk rates respectively were nothing to sneeze at. He was getting the job done, and became one of the more trusted relievers earning him more opportunities. By the end of May, he was on pace for over 90 innings, something a short reliever hasn’t done since 2007 (Saul Rivera and Heath Bell).

Since the calendar turned to June, it’s been downhill for the righty reliever. In 23.1 innings, his FIP hasn’t been all that bad (3.78), but his ERA is way up to 5.40. His strikeout and walk numbers have worsened (20.4% and 10.2% respectively). He’s been less fortunate as well, with his strand percentage (65.4%) and BABIP (.342) taking huge hits. The good news is that Warren’s arm seems just fine, as his average fastball velocity has actually picked up 0.3 MPH per Fangraphs.

Maybe he was overworked earlier in the year, maybe he was a bit unlucky, or maybe it was something completely random. But chances are, Warren’s talent level is somewhere between the two time periods I’ve isolated. Nonetheless, it’s evident that Girardi is cutting back on Warren’s workload in big spots. Warren’s game leverage index upon entering a game has fallen significantly since mid-July. 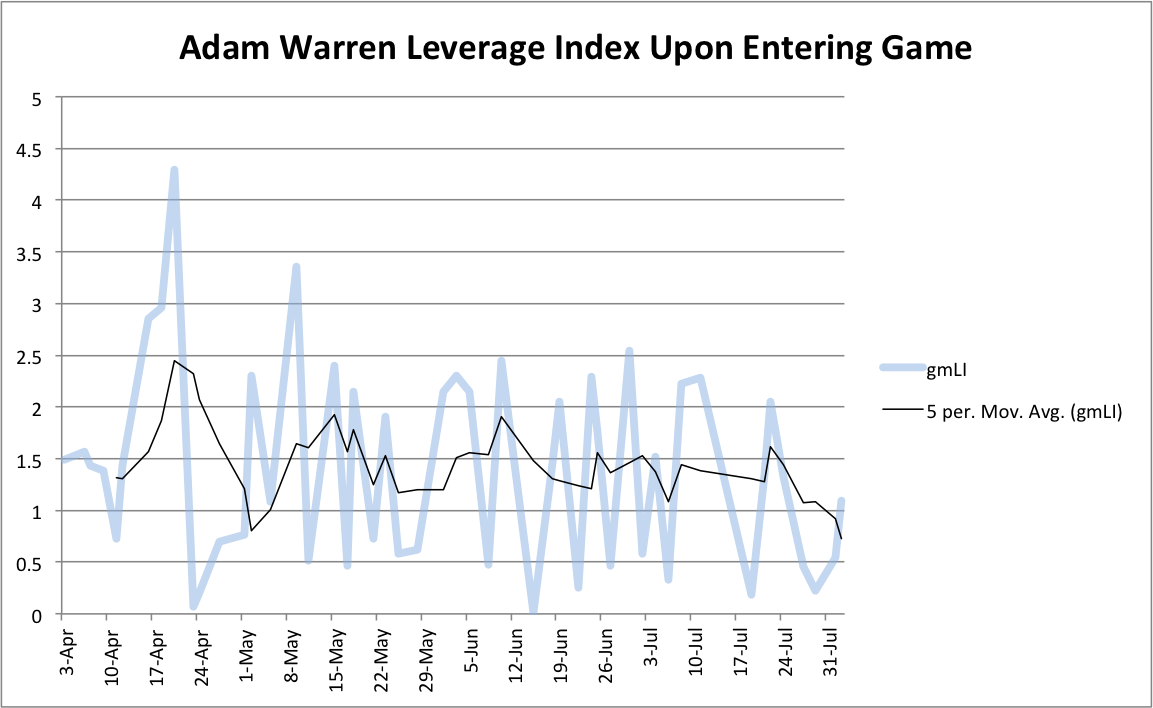 This is probably good for Warren, as it can give him a chance to work out the kinks in some less stressful situations. Plus, Shawn Kelley has come on strong in recent weeks allowing him to fill the role Warren previously assumed. I’m still confident that Warren can be a reliable reliever, but the apparent rearrangement of the bullpen pecking order looks justified given his recent performance.

This entry was posted in Analysis, Bullpen and tagged Adam Warren. Bookmark the permalink.