The Yankees bullpen has really scuffled of late. For the second time in two games, the bullpen cost them the game last night, when Dellin Betances and Shawn Kelley yielded four runs in the bottom of the eighth, turning a 3-1 lead into a 5-3 deficit. Monday night, it was Adam Warren who coughed up three runs in what was a one-run game. Even closer David hasn’t seemed himself lately, and has now walked five batters in his last five outings. Up until recently, the Yankees bullpen had been arguably the team’s biggest strength, but in recent weeks, the wheels have begun to fall off the wagon. Rough outings are to be expected — and have been received — from the guys like Chase Whitley, Matt Daley, David Huff, and Rich Hill, who sit at the bottom of the bullpen totem pole. But the top dogs have also started to struggle. Over the last 20 days, Robertson, Betances, Warren, and Kelley have all averaged a FIP below 4.00. That’s pretty bad, especially for a reliever: The American League average for reliever FIP is 3.63. 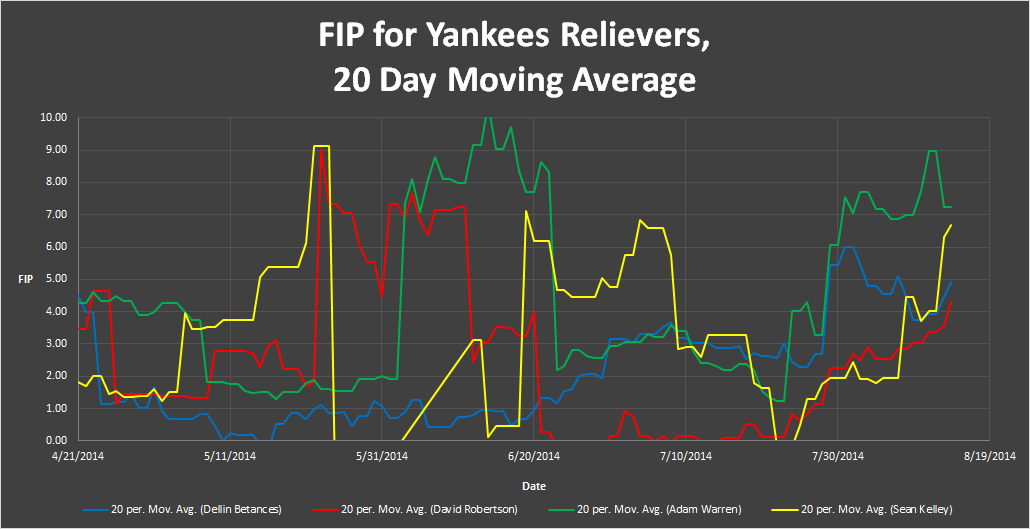 As good as the Yankees ‘pen has been this year, its not like its been completely smooth sailing. Betances got off to somewhat of a shaky start, Warren and Robertson both went through rough patches in May and June, and Kelley’s been all over the place. But this is the first time all season that all four have struggled at the same time. This turn of events is particularly troubling as the Yankees have reached a point in their season where there’s little margin for error. In order to make the playoffs, they’ll need just about everything to go their way from here on out, including the performance of their key bullpen pieces, especially following Matt Thornton‘s departure, which has left them without a usable lefty reliever on the roster.

There’s no denying that the Yankees bullpen has performed poorly over the past few weeks, but its more likely to be a fluke than anything else. A reliever only throws around 10-15 innings a month, which isn’t nearly enough to make any definitive conclusions about a player’s abilities. On top of that, there’s no reason to believe these pitchers’ struggles are in any way related. Its not like Adam Warren‘s ineffectiveness somehow caused Robertson to start struggling as well.

Sure, there’s a chance that any one of these pitchers’ slumps will turn out to be more than a blip on the radar. Its not hard to imagine Betances or Warren hitting a wall given the exorbitant amount of innings they’ve thrown this season. But until we start to see something tangible — like a drop in velocity — its probably not worth getting worked up about. Robertson, Betances, Warren, and Kelley have all established themselves as viable bullpen options over the season’s first four months, and I expect nothing less from them over the final six weeks.

Chris works in economic development by day, but spends most of his nights thinking about baseball. He writes for Pinstripe Pundits, and is an occasional user of the twitter machine: @_chris_mitchell
View all posts by Chris →
This entry was posted in Analysis and tagged Adam Warren, David Robertson, Dellin Betances, Shawn Kelley. Bookmark the permalink.