When Cano left for the Mariners, the Yankees had the daunting task of replacing a five-to-seven win player in 2014. Frankly, this was an impossible task given the fact that Cano is the best second baseman in baseball. Instead, the Yankees reallocated money to other positions of need to make up for Cano’s vacancy.

According to Dan Szymborski’s preseason ZiPS, Cano was projected to amass 5 WAR, while the new trio of new Yankees forecasted for 9 WAR (Ellsbury 4, McCann 3, Beltran 2). In total, it looked like the Yankees would come out ahead immediately while limiting long-term risk. Instead, Ellsbury has been the lone guy carrying his weight. Both Beltran and McCann have underperformed, while the former has also dealt with some health issues.

One might believe that it’s easier to match one player’s production with a multitude of replacements. I mean, how can one guy be just as good as three others? Think of it this way: for likely the same price, Cano plus a couple of average players (~2 WAR a piece) would have been the equivalent of the threesome of Ellsbury, McCann, and Beltran per preseason ZiPS. Now, keeping Cano doesn’t mean the Yankees would have stood pat otherwise. I think it’s fair to say they would’ve still signed McCann, while adding one of Beltran or Ellsbury. So with Cano, McCann, and either of Beltran or Ellsbury, the group would have been projected for about 10-12 WAR for $56M-$62M in 2014. At a similar expense per victory, the Yankees would have fielded a better team on paper.

Of course, the previous paragraph is only considering the 2014 impact. Below, a breakdown of the the two hypotheticals from before compared to the actual results of last offseason. The following assumes $7M per win in the open market, 5% inflation, and 20% decrease in yearly WAR for each player. Let’s order the scenarios from top to bottom as A through C. 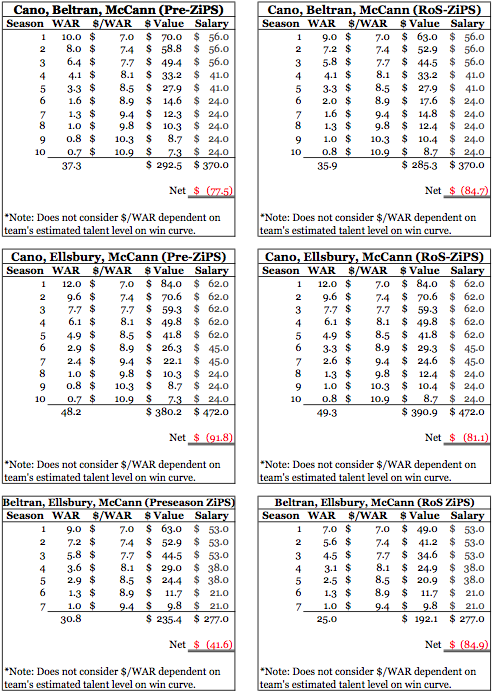 In the long run, the actual moves made (C) looked to be the best choice in the winter. It did sacrifice some short-term performance, but the difference in long-term value was stark. Fast-forward to the present, and we see how things have changed. In 2014 specifically, we’re talking about a five win swing between the best (B) and the worst trios (C, the actual outcome). That difference would probably have landed the Yankees in the Wild Card game, at worst.

Focusing on the long-haul, as mentioned, option C was most responsible before the campaign began. Today, it is the greatest liability of the three options. However, these examples also assume that the value of a win is equal for all teams, which certainly isn’t true. To illustrate, each win that pushes a team from 88 to 89 is worth more than moving from 70 to 71. Why? A club’s playoff odds aren’t changing for every incremental win in the 70s, but every additional win in the 80s is vital. Given that the Yankees performed like a .500 team in the prior year, the wins that they added in the offseason were of greater value than a team like the Astros could have tallied. With that in mind, had the Yankees matched Seattle’s contract, they probably would have broken even in the long run.

Today, it’s easy to say that the Yankees made a mistake. Their big ticket signings haven’t panned out, while Cano has continued to thrive. I don’t necessarily blame the organization for balking at ten years, but it’s so painfully obvious how badly Robbie’s talent is missed. The difference this year is far worse than expected, likely the difference between playing golf or baseball in October. Now that the 2014 season is nearing completion, the Yankees have experienced something essentially every other team has gone through: the difficulty of filling a superstar’s void.

This was originally published on Pinstripe Alley.