The Yankees didn’t make any blockbuster trades at this year’s trade deadline, but instead made a series of smaller moves aimed at improving the team on the margins. In four separate moves, Brian Cashman  added Brandon McCarthy, Chase Headley, Martin Prado, and Stephen Drew. All of these players fall into the same general category: A veteran who’s struggled in 2014, but was something close to an All-Star caliber player as recently as two years ago. Rather than trading for one or two well-established players this deadline, the Yankees went dumpster-diving, bringing on four players with obvious warts who could be had for little more than a song.

But this quartet isn’t as mediocre as their recent performances would suggest. As mentioned, all of these guys were a very good players in the not so distant past. Sure, its unlikely that any of them will return to their 2012 forms, but each is a good bet to outperform his current 2014 stat-line. Each of these players have all been trending in the wrong direction, but their Rest-of-season projections anticipate they’re in for a rebound. 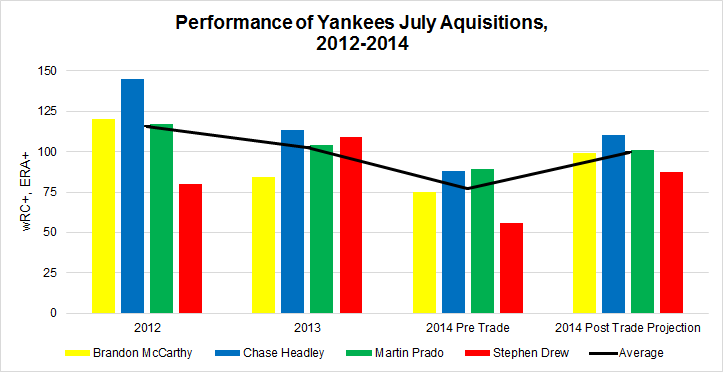 You might be a little skeptical of these projection systems. After all, they rely solely on past performance, which could make them a little slow to pick up on changes that would be obvious to a well-trained scout. That’s certainly true in some cases, but on the aggregate, these systems do a pretty good job of properly weighing the most recent data — even in the middle of the season. Simply put, a player’s overall body of work is more important than recent trends when it comes to forecasting future performance.That’s not to say all of the Yankees’ July acquisitions will bounce back. Any one of them could legitimately be as bad as his YTD 2014 performance implies, but the Yankees are playing the numbers game here. And odds are that at least one or two of the four will make a significant impact for the bombers down the stretch, and its already looking like McCarthy and Headley might fit that bill.McCarthy, Headley, Prado, and Drew have been all over the map in terms of production these past few years, so its hard to say for sure just how much they’ll be able to help the Yankees. But each one of these guys is a prime candidate for some upwards regression, and bringing them board undoubtedly makes the Bombers a better team now than they were four weeks ago, even if only by a couple of wins.

This article was originally published on Pinstripe Alley.

Chris works in economic development by day, but spends most of his nights thinking about baseball. He writes for Pinstripe Pundits, and is an occasional user of the twitter machine: @_chris_mitchell
View all posts by Chris →
This entry was posted in Analysis and tagged Pinstripe Alley. Bookmark the permalink.