It’s been quite a week for the WAR stat. Since Jeff Passan dropped his highly controversial piece on the metric on Sunday night, the interwebs have been abuzz with arguments both for and against the all-encompassing value stat. One criticism in particular that caught my eye came from Mike Newman, who writes for ROTOscouting. Newman’s qualm had to do with a piece of WAR that’s often taken for granted: the positional adjustment. He made the argument that current WAR models underrate players who play premium defensive positions, pointing out that it would “laughable” for Jason Heyward to replace Andrelton Simmons at shortstop, but not at all hard to envision Simmons being an excellent right fielder.This got me thinking about positional adjustments. Newman’s certainly right to question them, as they’re a pretty big piece of the WAR stat, and one most of us seem to take for granted. Plus, as far as I’m aware, none of the major baseball websites regularly update the amount they credit (or debit) a player for playing a certain position. They just keep the values constant over time. I’m sure that whoever created these adjustments took steps to ensure they accurately represented the value of a player’s position, but maybe they’ve since gone stale. It’s certainly not hard to imagine that the landscape of talent distribution by position may have changed over time. For example, perhaps the “true” replacement level for shortstops is much different than it was a decade or so ago when Alex Rodriguez, Derek Jeter, Nomar Garciaparra, and Miguel Tejada were all in their primes.I decided to try and figure out if something like this might be happening. If the current positional adjustments were in fact inaccurately misrepresenting replacement level at certain positions, we’d expect the number of players above replacement level to vary by position. For example, there might be something like 50 above-replacement third basemen, but only 35 shortstops. Luckily, the Fangraphs leaderboard gives you the ability to query player stats by position played, which proved especially useful for what I was trying to do. For each position, I counted the number of plate appearances accumulated by a players with a positive WAR and then divided that number by the total plate appearances logged at that position. Here are the results broken out by position for all games since 2002.

Based on this data, it seems like the opposite of Newman’s hypothesis may be true. A significantly higher portion positive WAR plate appearances have come from players at the tougher end of the defensive spectrum, which implies that teams don’t have too difficult of a time finding shortstops and center fielders who are capable of logging WAR’s above zero. Less than 13% of all SS and CF plate appearances have gone to sub-replacement players. But finding a replacement level designated hitter seems to be slightly more difficult, as teams have filled their DH with sub-replacement-level players nearly 30% of the time. Either teams are really bad at finding DH types (or at putting them in the lineup), or the positional adjustments aren’t quite right. The disparities are even more pronounced when you look at what’s taken place from 2002 to 2014.

The share of PA’s logged by shortstops and center fielders hasn’t changed much over the years, but the numbers have plummeted for first basemen, corner outfielders, and DH’s. From Billy Butler and Eric Hosmer, to Jay Bruce and Domonic Brown, this year’s lineups have been riddled with sub-replacement hitters manning positions at the lower end of the defensive spectrum. Meanwhile, even low-end shortstops and center fielders, like Derek Jeter and Austin Jackson, have managed to clear the replacement level hurdle this season if we only count games at their primary positions.

The waning share of above-replacement PA’s coming from 1B, LF, RF, and DH has caused the overall share to drop as well, with a particularly big drop coming this year. Here’s a look at the overall trend. 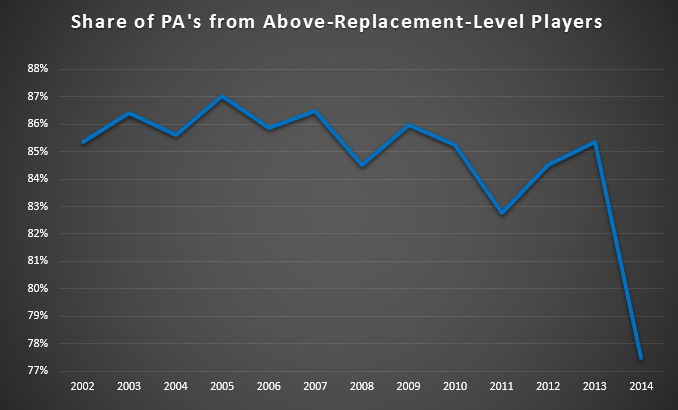 And here it is broken down by position… 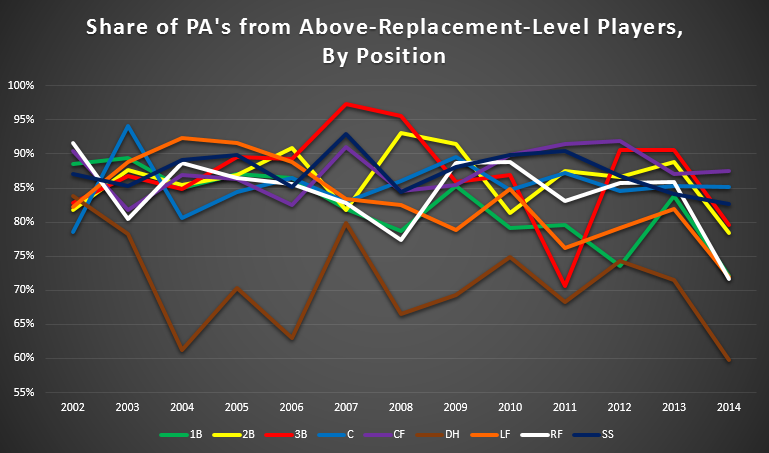 And just comparing this year to last…

Frankly I’m not sure what to make of all of this. I’m hesitant to call it evidence that the positional adjustments are broken. There could be some obvious flaw to my methodology that I’m not considering, but I find it extremely interesting that there’s been such a shift between this year and last.  We’re talking an 8 percentage point jump in the number of PA’s that have gone to sub-replacement-level players. Maybe its been spurred the rise of the shift or maybe year-round interleague play has something to do with it, but it seems to me that something’s going on here. And I’m interested to hear other people’s thoughts on these trends.

All statistics courtesy of Fangraphs.

Chris works in economic development by day, but spends most of his nights thinking about baseball. He writes for Pinstripe Pundits, and is an occasional user of the twitter machine: @_chris_mitchell
View all posts by Chris →
This entry was posted in Analysis, Around the League and tagged Fangraphs. Bookmark the permalink.