With his career culminating this past weekend, now seems to be a good time to examine where Derek Jeter stands against the Yankees’ pantheon of legends. This has become somewhat of a heated debate in the past week, partly because of Keith Olbermann’s rant in which he placed the Captain outside of the franchise’s top ten players in history. Lists like this are generally subjective, but it’s worth noting that Olbermann tried to use an objective measure (average WAR per season, excluding partial years with the Yankees) to determine this. Although I questioned his methodology from the outset, I was curious to see if his ranking was reasonable.

To come up with my own list, I devised a method similar to Jay Jaffe’s JAWS system for determining Hall-of-Fame worthiness. In short, Jaffe takes the average of the two following measures to reach a player’s JAWS score: career WAR and the aggregate of a player’s top seven seasons per WAR (termed 7-year peak). Jaffe’s method equally weighs career and 7-year peak, however, I wanted to make a few tweaks to provide a little more credit to those who either had their careers cut short in pinstripes or didn’t exclusively play for the Yankees. A player in that category might lack the career WAR totals of guys like Jeter, but have similar or better high-end seasons. Basically, I wanted those who had brilliant stints with the Yankees, but lacked the lengthy 15-year pedigree with the club to receive more consideration than if I had simply molded Jaffe’s model to be Yankees-centric.

I used the following information from Baseball-Reference, with help from the Play Index (all WAR measures are only with the Yankees): 7-year peak, 3-year peak, single-season peak, and remaining WAR with the organization. Respectively, they are weighted as follows: 35%, 25%, 5%, and 35%. Peak performance receives the majority of credit in my measure, with a particular boost to those with a longer period of high-level play. The rest of one’s Yankees career is still considered, as a full body of work cannot be ignored. Again, this provides a little more benefit to those lacking control of how much time they could spend in the Bronx, while not disregarding any one player’s complete body of work with the franchise. Lastly, the cutoff was 15 total WAR with the franchise, resulting in 91 total players.

Let’s get to the rankings (it’s scrollable):

There are certainly some players higher than one might think: namely Alex Rodriguez (7th) and Willie Randolph (9th). Whatever you feel about his PED use, there’s no denying that A-Rod at his best was an incredible performer, giving him peak-7 and peak-3 marks that rank 5th and 4th highest in Yankees history. Randolph obviously did not come close to Rodriguez’ peak (still pretty darn good, though), but was with the organization for a long time and was able to accumulate over 50 WAR in his career with the club.

Other rankings that I found intriguing: Recently departed Robinson Cano is all the way up at 14th, thanks to his incredible run of upper-echelon seasons. 1980’s star Don Mattingly, one of the most popular players of his time, checks in at 23rd. Goose Gossage (75th) and Reggie Jackson (79th) probably don’t deserve number enshrinements in monument park, although they are not alone. Guys like Roger Maris (42nd) and Elston Howard (43rd) are pretty far down the list, but are better known for single season accomplishments (Maris’ 61 home runs) or other break-throughs (Howard was the first African-American Yankee). Finally, it seems like Roy White doesn’t receive as much credit as he deserves, slotting 17th. I could go on — but check the list out for yourself and let me know your thoughts.

Circling back to Olbermann’s list, let’s first look at his use of average WAR per season (excluding partial years with the team): 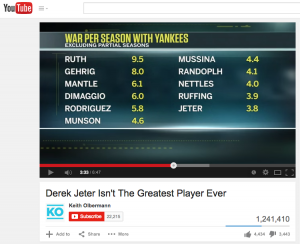 Now, he doesn’t explicitly say that this is his official list, but he did tweet that he has Jeter out of the top-10, but inside the top-20.

Let me briefly explain the problem with the metric he used: it’s not a fair comparison between all players involved. This metric does not account for the aging curve (i.e. when player X was on the Yankees). This means that someone who didn’t spend their decline years with the Yankees is propped up, and one who spent his entire (or most) of his career with the team is hurt. That is why I took greater consideration into one’s peak performances, while still acknowledging a full body of work. According to my calculation, one through four are the same, but A-Rod is 7th, Thurman Munson 20th, Mike Mussina 31st, Randolph 9th, Graig Nettles 22nd, Red Ruffing 19th, and Jeter 5th. Again, I believe that my measure is more accurate because it gives a large chunk of credit to one’s top seasons, while also accounting for one’s lineage with the team.

The downside to my process is that playoff performance is ignored. I’m not sure how to factor this in, at least not yet. Postseason WAR does not exist to my knowledge — and presumably, replacement level would be higher anyway. Nonetheless, incorporating postseason play might be a bit unfair in terms of comparing players in different eras. There are sample size problems, playoff format changes, and competitive balance changes. Moreover, being a champion isn’t all on one player — the credit is spread around the entire roster.

One might also note that there is no consideration for individual awards, like MVP, Cy Young, or Gold Glove. These accolades are partially subjective, which is out of a player’s control. Plus, any given player can’t control how well someone on another team is going to perform in a particular season. The same can be said about leading the league in any statistical category. This is why WAR works the best in this instance: it is context-neutral and accounts for everything: hitting, pitching, defense, and baserunning. I was actually considering adding WPA or RE24, but the history of those stats only goes back so far, and it would also credit or debit a player for situations not in one’s complete sway.

For now, I think regular season WAR metrics are enough to create this ranking. Perhaps overwhelming postseason performance might make the difference between two players who are mere decimal points apart, but when doing something like that, bias sets in. As it stands, I believe my scoring system passes the reasonableness test. Take it for what it is, and let me know of any thoughts or disagreements you might have in my methodology.

This entry was posted in Analysis, Yankees History and tagged Derek Jeter. Bookmark the permalink.