The Yankees have a tough decision looming with regards to their current closer, David Robertson. The 29-year-old is slated to hit free agency come season’s end, and he’s likely be paid handsomely. Tasked with the tall order of replacing Mariano Rivera as the team’s closer, Robertson’s been everything the Yankees could have asked for this season. His 2.34 FIP and 39% K% rank 16th and 7th respectively among relievers in 2014, making him easily one of the best ten or twenty relievers in the game. Save for the two weeks he missed with a groin strain back in April, Robertson’s dominance has enabled the Yankees to seamlessly transition from one elite closer to another. Yet as good as Robertson’s been, it’s unclear if the Yankees will be willing to spend what it would take to retain their closer, especially with the equally-dominant Dellin Betances already in the fold.

On a dollar per WAR basis, relief pitchers tend to be vastly overpaid on the open market. On average, free agent relievers cash in at over three times the overall market rate, while elite closers — such as Jonathan Papelbon — have been known to go for significantly more than that. The Yankees front office is well aware of this price-value disconnect. In the last two offseasons, they’ve let both Rafael Soriano and  Boone Logan sign multi-year contracts elsewhere, and let the Nationals have Matt Thornton for literally nothing other than the few million left on his contract. Plus, for all of the mega-deals the Yankees have handed out in the last 6-8 years, they’ve been very spendthrift when its come to relievers. Aside from Mariano Rivera, Rafael Soriano has been the only notable reliever contract they’ve signed in quite some time, and even that was mandated by ownership. Prior to that, we’re getting back to Pedro Feliciano (2Years/$8M) and Damaso Marte (3 Years/$12M), if those even qualify. Otherwise, we’re looking at the Kyle Farnsworth deal signed way back in 2006.

But even if relievers are over-priced, that doesn’t necessarily mean the Yankees should simply let Robertson get his millions elsewhere. WAR/dollar valuations are great and all, but at the end of the day, there are only so many ways to upgrade a team. If the Yankees were to move Betances to the closer’s role and replace D-Rob’s roster spot with an inferior pitcher, they would immediately make their team worse by a win or two. Sure, they could theoretically spend that saved money elsewhere on the roster, but there are only so many other spots left to upgrade. Robertson is one of the best at what he does, and the Yankees would be hard pressed to find a comparable replacement.

There’s no denying that Robertson’s a great reliever right now, but pitchers aren’t exactly know for having long shelf lives. And unsurprisingly, the history of great relievers entering into their 30’s isn’t overly encouraging. From 2002 to 2013, 32 relievers have thrown at least 100 innings in their age 28 and 29 seasons while posting an ERA, FIP, and SIERA all below 3.50.

Just like Robertson, every one of these pitchers was coming off of at least very good seasons, and had no known injury concerns. But that changed in a hurry. Six of these 32 landed on DL in their age 30 seasons, and excluding those who turn 31 next year, only 16 of 28 (57%) made it through their age 30 and 31 seasons unscathed. This, along with a few who simply stopped being good — like Brandon League and John Axford — caused the group’s average production to dip by 0.7 (FIP-based) WAR through age 30, and by another 0.4 by age 31. Here’s a Google doc of all of the relievers considered if you’re interested. 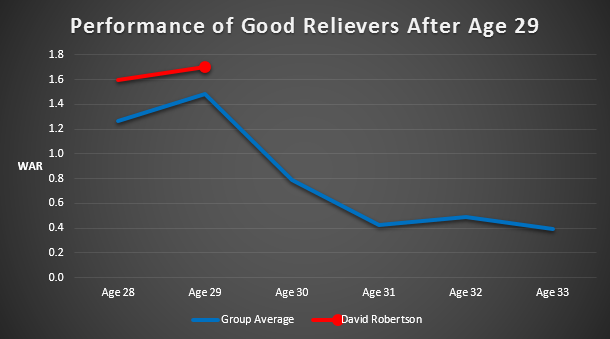 As depressing as this sounds, keep in mind that the many of those who stayed healthy continued pitching well. Guys like Glen Perkins, Joe Nathan, Heath Bell, and Francisco Cordero didn’t miss a beat as they trekked through their early thirties. The upside of a Robertson extension is clear — a healthy Robertson is likely to continue being a good Robertson — but how he’ll hold up as he embarks on his 30’s is anyone’s guess.

There’s also the issue of the luxury tax. The Yankees threw the “$189M plan” out the window when they binged on Masahiro Tanaka, Jacoby Ellsbury, Brian McCann, and Carlos Beltran last winter, meaning they’re required to pay an extra fifty cents on every dollar spent over that $189M threshold. So a $30M contract for Robertson would actually end up costing the Yankees $45M, with $15M going straight to the tax man. As always, its hard to say how much an extra few million really matters to a team like the Yankees, but its yet another factor that might dissuade them from investing in a 30-year-old closer.Whatever Robertson ends up getting, it will likely be an overpay by dollar/WAR standards., but the Yankees have the financial muscle to be able to overspend on a good player. It’s the injury scenario that they should be worried about. As reliable as D-Rob’s been these past few years, he’s a 30-year-old pitcher, which means he could go all Ryan Madson or Joel Hanrahan on us without much notice. Re-signing Robertson would almost certainly give the Yankees the best shot at making the playoffs in 2015. That might be all the justification needed following (probably) two consecutive years of missing the postseason, but the Yankees should still tread carefully. The last thing they need is yet another albatross contract, and Robertson would be just a ligament tear away from turning into exactly that.

Chris works in economic development by day, but spends most of his nights thinking about baseball. He writes for Pinstripe Pundits, and is an occasional user of the twitter machine: @_chris_mitchell
View all posts by Chris →
This entry was posted in Analysis and tagged David Robertson, Pinstripe Alley. Bookmark the permalink.