In the days leading up to the winter meetings, the Yankees swung a trade for shortstop Didi Gregorius, who will be tasked with the tall order of replacing Derek Jeter as the team’s starting shortstop in 2015. Still two months shy of his 25th birthday, and with five years of team control remaining, the Yankees hope they’ve found someone who’ll be a fixture in their lineup for years to come.

There’s certainly a lot to like about Gregorius. Most consider him to be an above-average defender at an uber-premium position, and he’s shown flashes of offensive promise to boot. He hit a respectable .277/.332/.389 in parts of seven minor league seasons, and managed a 92 wRC+ in something resembling to a full season’s worth of games in 2013 — quite an accomplishment coming from someone with his defensive acumen.

But things didn’t go as swimmingly for Didi in 2014. Following an atrocious spring training, Gregorius lost out to fellow youngster Chris Owings for the D-Backs’ starting shortstop gig, and began the season in Triple-A Reno of the Pacific Coast League. Didi redeemed himself a bit by hitting .310/.389/.447 in two months in the PCL, but fell flat on his face after returning to the big club in June, hitting just .226/.290/.363. We’re only talking 299 plate appearances here, so small sample size caveats apply, but there seemed to be something amiss with Didi’s offensive game: His plate discipline took a turn for the worse.

Gregorius swung at 34% of pitches outside of the zone in 2014, up from 29% last year, but the biggest red flag has to do with what Didi did — or didn’t do — with pitches inside of the zone. He swung at just 72% of balls in the zone in 2013, but offered at just 62% last year. Together, these trends caused his Correct% — the ratio of pitches where he either swung at a strike or didn’t swing at a ball — to drop from 71% to 64%. A swing of 7 percentage points may not seem like a lot, but it’s actually kind of a big deal. In fact, as I uncovered in a recent article for The Hardball Times, this was the biggest single-season dip we’ve ever seen since PITCHf/x started tracking such things in 2008. His Correct% dropped from the 95th percentile in 2013 all the way down to the 15th last season.

Here’s a look at his Correct% by month. 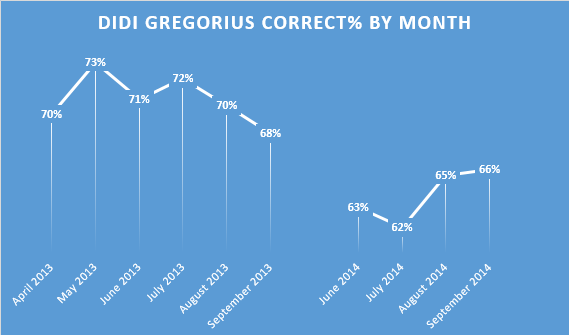 Let’s take a look at some heat maps of his Swing% to figure out exactly what changed for Didi between 2013 and 2014.

There’s a lot less red in the upper-left quadrant of 2014’s heat map, which shows that he grew more passive on pitches in the middle of the zone and also up and away. Overall, this doesn’t seem like a change in approach that would behoove Didi. Most hitters generate a lot of power on these types of pitches, and Gregorius is no exception. For his career, he holds a .487 slugging percentage on pitches within the 4×4 square in the upper-left of the strike zone, compared to a .387 SLG outside of it. Every time he lays off one of these pitches, he forgoes an opportunity to drive a hittable pitch, like he did with this homer off of Kevin Quackenbush last August.

You’ll also notice that he became a little more swing-happy on pitches well below the zone. This shift was especially stark for pitches more than three inches below the rule book strike zone — or equivalently, less than 15 inches off the ground. His swing rate on these very-low pitches jumped from 30% (85 of 280) to 37% (88 of 236). This is obviously not a positive sign, as good things rarely come from swinging at pitches that far out of the zone. For his career, Didi has swung at 177 of these pitches, and missed 86 of them — nearly half. Only nine of those swings resulted in hits.  Here’s a look at the most frequent outcome: The swinging strike.

Making contact on these pitches is often even less productive…

It’s not easy to pinpoint what caused Didi’s plate discipline to take a dive like it did last season, especially since there aren’t any obvious changes in the way pitchers went after him. For the locations in question, opposing pitchers didn’t seem to alter their plan of attack. 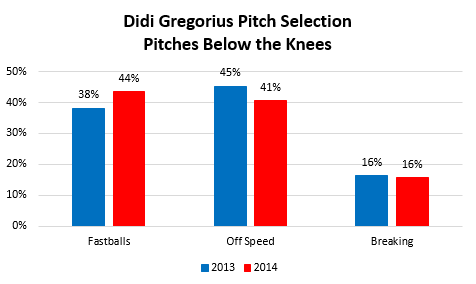 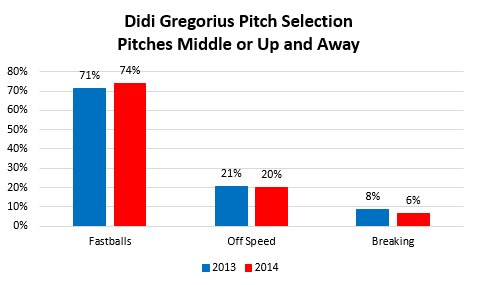 So this doesn’t really look like its an instance of pitchers capitalizing on weaknesses in Didi’s swing. Instead, it appears to be a Didi problem: For whatever reason, he just started making bad decisions at the plate last year. Whatever the cause, these changes don’t bode particularly well for Gregorius’s future. Changes in Correct% correlate with changes in both strikeout and walk rates, so its probably no coincidence that both trended in the wrong direction for Gregorius last year. Plus, his new-found passivity on balls in the zone has the potential to really hamstring his ability to drive pitches. Although he did a decent job of hitting for power last year, belting 6 homers in what amounted to one third of a season, it would be foolhardy to put too much stock in that total. A hitter’s power numbers can be pretty fluky in small samples, and given his 2014 approach, it’s hard to envision him keeping up that pace going forward.

Letting certain pitches go by — even if they’re strikes — isn’t always a terrible idea, but offering at pitches that are practically in the dirt sure is. Hardly anything good ever comes from trying to hit these pitches, as they almost always result in either swings-and-misses or weak grounders. If he’s unable to lay off pitches well below the knees, Didi’s batting average will likely suffer, especially if opposing pitchers start exploiting this weakness.

Unless he makes some adjustments — or un-learns some of his bad habits — it’s hard to envision Gregorius being much more than an all-glove shortstop. He’s an excellent defender by all accounts, so he could still be of value even if he can only muster something like a .240/.300/.350 line. But whether or not he’s good player or merely an acceptable one will come down to his hitting, and ultimately his plate discipline. Who knows if Didi’s 2014 will prove to be a canary in the coal mine or just some weird fluke, but I know I’ll be closely monitoring his swing rates come April. Hopefully they’re due for some serious positive regression.

Chris works in economic development by day, but spends most of his nights thinking about baseball. He writes for Pinstripe Pundits, and is an occasional user of the twitter machine: @_chris_mitchell
View all posts by Chris →
This entry was posted in Analysis and tagged Didi Gregorius, Pinstripe Alley. Bookmark the permalink.