A new contract, the pressure of New York, age, and the shift. Those are just a few of the explanations for Brian McCann‘s disappointing offensive performance in 2014. There’s no question that his debut in pinstripes didn’t go as planned in year one of a five year contract. A big reason for the team’s signing of McCann was his reputation defensively and his ability to handle a pitching staff, but undoubtedly the greatest attraction was McCann’s forte with the bat. It was easy to expect McCann, a left-handed hitter, to tatter the short porch in right field. Plus, the 2013 collective of Yankees’ catchers hit for a dismal 61 wRC+, making McCann’s career mark of 117 entering 2014 even more alluring. Yet, after hitting just .232/.286/.406 (92 wRC+) in 2014, it isn’t crazy to wonder if the Yankees have yet another albatross deal on the books for a player in decline.

Can 2015 be a year of redemption for McCann? It sure seems like the Yankees are counting on it. This offseason, the club hasn’t made any significant offensive additions around the diamond or in the outfield, which leads one to believe that the front office expects McCann, among others, to carry the load this season. That might prove to be a tall task for the Yankees’ backstop, who has a few factors painting an unfavorable picture for 2015 and beyond.

Throughout his career, one of McCann’s strengths has been his ability to put the bat on the ball. He doesn’t strike out too frequently, as his 14.3% punchout rate in 2014 indicates. In addition, McCann historically has shown a pretty decent eye, walking around 9 to 10% of the time on a yearly basis — until last season, at least. McCann set a career worst 5.9% walk rate in 2014, plummeting from 9.7% in 2013.

Chris did some research featured in The Hardball Times regarding plate discipline, particularly about whether or not a batter made the right decision to swing at a pitch depending on its location. His simple metric, “Correct %”, credits the batter for swinging at a ball within the strike zone and debits the batter for chasing a pitch outside of the strike zone. It’s not a perfect measure, though. For example, it hurts a batter who lays off a curveball on the black, even though there’s not much a batter can do with such a pitch. Nonetheless, it’s a reasonable barometer for a hitter’s judgement at the dish. 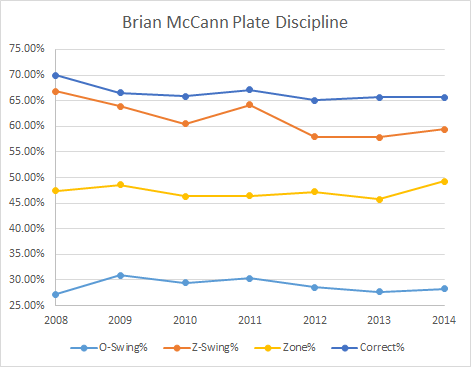 The good news is that McCann’s Correct% didn’t budge from 2013 to 2014, so he’s still making pretty good judgement at the plate based on the pitches he’s seeing. However, it’s his opponents’ approach that is most concerning: McCann saw a career high 49.3% of pitches in the strike zone (Zone%) last season. The jump is noticeable in the graph above. So while McCann’s Correct% remained steady, he was forced to swing more often (2% overall jump) because he saw so many more strikes. So even though he didn’t chase too many more pitches outside of the zone than previously (only 0.6% increase in O-Swing%), it’s plausible that opposing pitchers pounding the zone at a higher rate caused McCann’s depleted walk rate. The pertinent question now is the following: what can we expect McCann’s Zone% to be in 2015?

The bad news is that Zone% correlates strongly year-to-year (.794), and that McCann’s place on the aging curve (31 years-old in February) is at a stage where Zone% begins to rise. That means that we can probably expect pitchers to attack McCann more often going forward. So, for McCann to earn more bases on balls next season, he’s going to need to lower his O-Swing%. The problem is that O-Swing% also correlates strongly (.850) from one year to the next, and because McCann’s hasn’t changed much since 2012, a significant improvement is dubious.

I don’t think McCann is a true 6% walk guy going forward simply because of what happened in 2014, considering regression and whatnot. However, I’m not optimistic about him posting walk rates around 9 or 10% ever again. The PITCHf/x data is pretty troublesome and will be difficult for McCann to overcome. It’s a discernible strike against McCann being the guy the Yankees thought they signed prior to last season.

When the Yankees signed McCann, it seemed like a foregone conclusion that he would belt 25 to 30 home runs thanks to the short porch at Yankee Stadium. He wasn’t far off, hitting 23 long balls, but his slugging percentage (SLG) and and Isolated Power (ISO) dropped significantly in 2014. A lot of that might have to do with how well McCann struck the ball.

Kevin Ruprecht of Beyond the Box Score found that fly balls hit further than 310 feet are significantly more productive than those of a short distance. From there, he created two bins — fly balls greater and less than 310 feet — and showed the average distance, statistical results, and frequency of the two. Note: this study encompasses years 2012-2014. PRD = (1.7 * BA) + SLG.

Obviously, the more often a fly ball is hit farther than 310 feet, the better. In case you’re wondering why results flatline around 380 feet or so, this is because just about every fly ball at this distance or farther is a home run. Now, back to McCann. Until 2014, McCann was well above average in fly ball distance:

McCann’s fly ball distance, by bin, has trended downward since 2011. It was still comfortably better than league average through 2013, but that changed last season. McCann suddenly hit 71% of fly balls less than 310 feet in 2014. That’s just about league average (71.5%) for 2012-2014 — not what the Yankees had hoped for. As for an explanation? It’s difficult to say. It could be anything from swing mechanics, vision, or bad luck.

Even when McCann is hitting the ball in the air with authority, his average distance is on the downturn:

As exhibited in the graph titled “Fly Ball Production by Distance Bucket”, PRD increases rapidly as distance increases up until where it flatlines. So as McCann’s average flight distance drops, we can expect his output to fall as well. That, in combination with fewer fly balls farther than 310 feet, is a recipe for power decline.

The elephant in the room is if McCann can recover some lost distance and frequency of long fly balls. I don’t know how predictive these numbers are year-to-year, but the graphs certainly depict a trend for the worse. Probably, Yankee Stadium can mask some of McCann’s power decline going forward. But all else being equal, his best power days are in the past.

There are only 12 other catchers who’ve caught more innings than McCann in the last 20 years. Furthermore, there are only two active catchers (AJ Pierzynski and Yadier Molina) with more innings than McCann. 31 in February, McCann’s better days are clearly behind him, and all that time squatting behind the plate probably isn’t helping. There are plenty of nicks and bruises catchers accumulate behind the plate, and some of those can have longstanding effects.

There’s been some talk of McCann moving to first base full-time once Mark Teixeira‘s contract expires, paving the way for a young backstop like John Ryan Murphy or Gary Sanchez. This hypothetical situation would occur in 2017, McCann’s age 33 campaign and the fourth year of his five season pact. Logically, this would appear to be a beneficial move to slow down McCann’s physical and productive decline. In spite of this, there’s evidence that catchers don’t slow down faster than the rest of the player population.

Above is an aging curve of catchers compared to all positions in a 30-year period through 2013. This chart is the change in offensive runs above average by age, meaning it excludes defense from the calculation. So all else being equal, we shouldn’t expect McCann’s bat to get a boost from transitioning to first base down the road. Fair enough, but what are the chances his defense behind the plate takes a nosedive?

Today, McCann is an excellent pitch framer, and the good news is that the framing skill isn’t really altered as a player gets older. Of course, framing doesn’t encompass all of catcher defense. We can get a better look at how catcher defense ages through a catcher WAR aging analysis Travis Sawchik penned.

WAR takes into account everything: offense, defense, and baserunning. Sifting through Sawchik’s research, it’s evident that from age-32 and onward, catcher production remains steady enough that, in conjunction with the offensive aging curve above, makes it seem like McCann doesn’t have too much to gain from a position change.

These aging curves are good and dandy, but a game changer for McCann could be concussions. No, he hasn’t been prone to them in his career, with just one in 2008 and another last season. The one back in ’08 was from a collision at the plate — something he no longer needs to worry about with rule changes. Last season’s concussion, though, was from a foul tip to the mask. That’s an inherent danger of being a catcher, and McCann is sure to take more tips to the mask going forward. Will they all result in concussions? Of course not, but according to the CDC, athletes who have a concussion at any period in their lives become more susceptible to incurring another in the future. So if McCann grows more susceptible to this injury, the Yankees may need to move him off the position for his own safety, rather than for a wishful statistical benefit.

Ultimately, the Yankees have a declining hitter for the next four seasons. Considering the trends in his plate discipline and fly ball profile, it’s unlikely he improves with the bat aside from some regression to the mean. The good news is that McCann’s prowess with the glove and as a handler of the staff should be just fine in 2015 and beyond. So unless other circumstances, like health, force the Yankees hand, McCann is probably more valuable behind the plate for the duration of his contract. The Yankees probably shouldn’t be counting on McCann to be a force in the heart of the lineup in the short and long-term, but alas, the same can be said about the Teixeira and Carlos Beltran.

All of this isn’t to say that McCann is a bad player now. He’s still an above average catcher in all likelihood. Yes, he’s being paid like an elite catcher despite those days in the rear view mirror. The point is that McCann has entered his decline phase, with plenty of poorly trending peripherals to back up that statement. But for the optimists out there: maybe, just maybe, McCann will have a dead cat bounce in 2015.

This entry was posted in Analysis and tagged Brian McCann. Bookmark the permalink.

One Response to Will Brian McCann rebound?