After an impressive two-month run in Pinstripes, the Yankees locked up Chase Headley to a four year, $52M deal. That price felt relatively light for a player of Headley’s caliber, especially compared to the 5/$95M the Red Sox gave to Pablo Sandoval — who has a similar 2015 Steamer projection — just three weeks earlier.

One of the factors that makes Headley’s contract seem so team friendly is the value he provides on defense. Per UZR, Headley’s been one of the best third sackers in the game over the past few years, racking up 35 runs above average since 2012 — more than any other other third baseman. Not all agree with UZR’s rosy outlook of Headley’s defense, however. FRAA and DRS — the house metrics for Baseball Prospectus and The Fielding Bible respectively — peg him much closer to average. 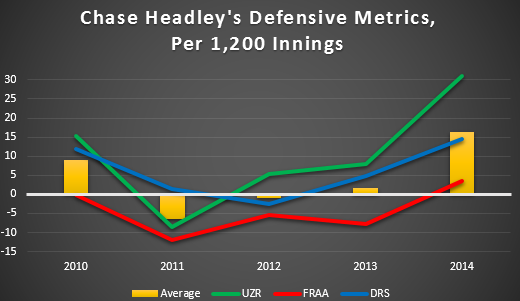 Even the Yankees themselves have talked down Headley’s defense. Here’s a quote from Brian Cashman from last July, when the Yankees acquired Headley from the Padres:

I think there’s some confusion on the metrics about what he really is… Our scouts have him as an average third baseman.

In sum, UZR thinks Ellsbury’s a defensive wizard, while just about everyone else — including his own team — pegs him close to league average. Based on what I saw last year, Headley certainly looked like a plus defender. I remember him making more than a few nice diving stops, like this.

But I don’t trust my eyes. Not only do I have zero training in evaluating a player’s defense, but as a Yankees fan, I’ve grown accustomed to watching poor defensive third basemen these last couple of years — guys like Alex Rodriguez, Kelly Johnson, Eduardo Nunez, and even Kevin Youkilis. Of course Headley looks good after watching that crew. For Yankees fans, Headley’s defense is like the female teacher at an all-boys school: Looks good in context, but may not be anything special in the grand scheme of things.

So the metrics can’t come to a consensus on Headley’s defense and our own eyes can only tell us so much. Now what? Luckily, there are people out there who are paid to watch these players and objectively analyze each play. Inside Edge evaluators judge the catchability of each ball hit in a fielder’s general direction and document whether or not he made the play. Using their aggregated data, we’re able to get a sense of how Headley performed relative to league average according to the eyes of skilled observers. In the charts below, the blue line represents Headley, while the red line represents Major League third basemen as a group.

By this analysis, Headley clearly looks like a better-than average third baseman. Although he rarely makes the super tough plays, he makes most of the routine ones, and more than his share of the plays that fall somewhere in between. A plot of every play Headley made last year illustrates this a bit more clearly.

Lots of green and yellow dots, but just a handful of oranges, and not a single red. I think this makes it pretty clear that Headley’s defense at the hot corner is something less than elite. Sure, he makes a lot of nice plays — more than most, even; but he rarely makes the jaw-dropping ones that separate the great fielders from the very good ones. Since 2012, Headley’s made just 2% of the plays deemed “remote” by the Inside Edge scouts, putting him well behind defensive wizards like Nolan Arenado, Josh Donaldson, and Mike Moustakas.

But luckily for Headley, those difficult opportunities are few and far-between. 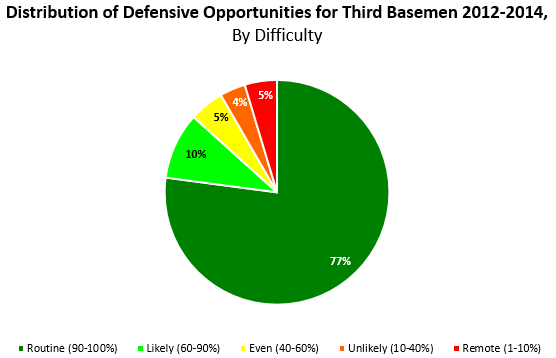 The meat and potatoes of playing a good third base aren’t the high-difficulty plays, but are the “routine” and the “likely” ones. These plays make up 87% of all opportunities for at the hot corner, and Headley converts these balls into outs more often than your average third baseman. This alone makes him an above average third baseman, even if he lacks the range to be one of the elites.

Chris works in economic development by day, but spends most of his nights thinking about baseball. He writes for Pinstripe Pundits, and is an occasional user of the twitter machine: @_chris_mitchell
View all posts by Chris →
This entry was posted in Analysis and tagged Chase Headley, Pinstripe Alley. Bookmark the permalink.