Nathan Eovaldi is a lottery ticket for the Yankees. It’s easy to dream on the 25 year-old flamethrower, especially under the tutelage of Larry Rothschild. Yet, it’s alarming that the Marlins gave up on a big arm with three seasons of control remaining for Martin Prado. There are a number of areas for improvement in Eovaldi’s game, but today’s focus will be the pitcher’s trouble with left-handed hitters.

Last season, Eovaldi allowed a .336 wOBA against lefties while holding righties to a .304 mark. This wasn’t a blip on the radar, as his career split is .338/.299. That type of performance moving to Yankee Stadium…no explanation necessary. Eovaldi needs to minimize this weakness if he plans to have success in pinstripes. I’m sure Rothschild and the rest of the coaching staff have some ideas to combat this issue — better ones than I do — but one I’d like to discuss today is his fastball location and usage.

The old adage is that lefties are low ball hitters. To test the validity of this, I took a look at southpaw hitters’ performance against high four-seamers since 2012 (zones 1, 2, 3, 11, and 12 below) compared to low four-seamers (7, 8, 9, 13, 14). Why only four-seamers? It’s Eovaldi’s primary fastball, and that conventional wisdom indicates offspeed pitches don’t belong up in the zone. 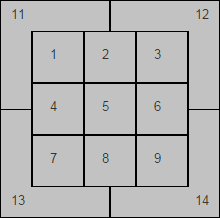 I concede that some pitches in zones 11, 12, 13, and 14 might be better classified as middle, but including those areas don’t skew the results. Below, a table of left-handed hitters’ output against four-seam fastballs since 2012:

Now, Eovaldi’s fastball isn’t your run of the mill offering: it averaged 95.5 MPH in 2014, fourth highest of qualified starting pitchers. This made me wonder: how do lefty swingers perform against higher velocity fastballs? I set the lower limit to 94 MPH, as Eovaldi tossed all but 14% of his four-seamers at that velocity or better. The difference between locations is starker:

So what do the results look like for Eovaldi?

Lefties absolutely kill Eovaldi’s fastball in the lower third. Yes, this is a small sample size — just 507 at-bats ending on four-seamers (200 of them on low pitches), but the production is pretty alarming. Even accounting for bad fortune, Eovaldi’s results still jive with the notion that lefties prefer low offerings.

After all this, it would be easy for me to say that Eovaldi should throw more high fastballs. Obviously, it’s not as simple as that, but there’s definitely room for Eovaldi to elevate the pitch more often. In fact, his frequency of high fastballs has declined in each of the past three seasons: 52.1%, 40.2%, to 32.2% in 2014. It’s clear that lefties struggle against fastballs in this location, especially those at a higher velocity, so why not attempt to capitalize on it? Of course, there would come a point of diminishing returns as hitters adjust to a new approach, but this seems like a reasonable start to resolving Eovaldi’s woes against left-handers.

Statistics via Baseball Savant and Fangraphs.

This entry was posted in Analysis and tagged Nathan Eovaldi. Bookmark the permalink.