Shortly before the new year, I wrote a piece for the Hardball Times chronicling KATOH — a methodology I developed to project prospects’ big league performance. I won’t get into the nitty-gritty, technical details here — feel free to check out my original piece if you’re interested. Basically, KATOH looks at a hitter’s age and league-adjusted minor league stats and estimates the probability that a player will reach certain WAR thresholds. These probabilities can then be used to estimate how many fWAR he’s likely to accumulate through age 28.

I produced a projection for every player who played in the minors last year, and you can see how your favorite prospect projects by clicking here. But today’s about the prospects of yesteryear. To identify prospects who most fell short of expectations, I simply took players’ actual WAR value, subtracted their projected WAR value, and found the guys with the biggest difference. So say a prospect was projected to produce 20 WAR, but only produced 15. His difference would be 5 (20-15). Got it? Good.

Without further adieu, here are the 20 biggest Yankees hitting prospect flops since 1990 according to KATOH.

I plan to take a closer look at a several of these names in the coming weeks, but today I’ll focus on the man atop the list: Nick Johnson. Most of the players on this list were middling prospects who never developed into useful big leaguers — guys like Ricky Ledee, Jackson Melian, and Erold Andrus (brother of Elvis). But then there’s Johnson, who was projected to have an excellent big league career following his 1999 campaign, but wound up having a merely good one instead. What went wrong?

Johnson’s 1999 season was stuff of legends. As a 20-year-old with Double-A Norwich, he hit a stupid .345/.525/.548. He pretty much did it all that year. He rarely struck out (15% K%), drew a butt-load of walks (21% BB%), and hit the ball with authority as evidenced by his .203 ISO and .411 BABIP. As if that weren’t enough, he also showed non-terrible speed by going 8 for 14 on the basepaths. Seasons like that just don’t happen all that often, which is why Johnson’s 1999 campaign produced the third best KATOH projection on record, behind Cliff Floyd‘s 1993 and Vladimir Guerrero‘s 1996. Johnson’s performance was enough to vault him to #5 on Baseball America’s top 100 list the following winter. In terms of pure offensive potential, Johnson was arguably the best prospect out there, and he was just about ready to bring his act to the Major league level.

Unfortunately for Johnson, injuries — particularly of the hand and wrist variety — prevented him from ever reaching his ceiling. The first warning sign came the following Spring Training, when he strained his wrist while taking a swing. The injury wasn’t originally supposed to be anything serious, but took much longer than expected to heal, leading him to sit out the entire season. Even after missing all of 2000, Baseball America pegged him as the #10 prospect in baseball. He returned to action in 2001, where he hit .256/.407/.462 in Triple-A Columbus before making his big league debut that September. His 2001 season was very good, but much less exciting than his monster 1999, causing his KATOH projection to plummet to 9.6 WAR. Baseball America dropped him to #13 on their annual list.

Johnson was in the big leagues for good from there on out, spending two years with the Yankees before he was dealt to the Montreal Expos in the Javier Vazquez deal. Johnson actually developed into an excellent hitter. From age 24-28 (2003-2007), he put up an excellent 136 wRC+, but only averaged 89 games per year over this time due to a litany of injuries. The biggest blow of all came on September 23rd 2007, when he broke his right femur (thigh bone) in a collision with Austin Kearns. Ouch. He was never quite the same after that. 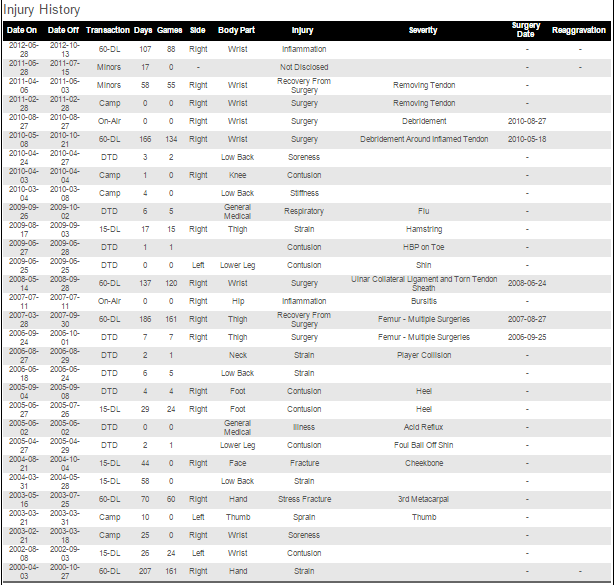 Despite all of the injuries, Johnson managed a pretty solid career, accumulating 12.6 fWAR through his age 28 season. That may not seem like a lot, but is actually a healthy total. Of the 65 28-year old hitters who played in the majors last year, only 11 reached Johnson’s mark. Many more fell short, including some very good players like Lorenzo Cain, Todd Frazier, and Matt Carpenter. Still, Johnson came nowhere close to fulfilling the potential he had as a 20-year-old, when he looked like a superstar in the making. The fact the he managed to be as productive as he was is a testament to his raw talent. But it also leaves us thinking about what might have been if his body wasn’t so darn fragile.

Chris works in economic development by day, but spends most of his nights thinking about baseball. He writes for Pinstripe Pundits, and is an occasional user of the twitter machine: @_chris_mitchell
View all posts by Chris →
This entry was posted in Analysis and tagged KATOH, Nick Johnson, Pinstripe Alley. Bookmark the permalink.