Failing to record an out is a starting pitcher’s worst nightmare. Generally, it means that either the pitcher suffered an injury or had absolutely nothing that particular day. In the case that the pitcher is healthy but eminently hittable, one can only imagine the embarrassment the pitcher feels. Additionally, it’s a pretty big let down to the pitcher’s teammates. Players underperform from time to time, but perhaps nothing hurts a team as much as a starter who gets rocked and subsequently pulled before retiring a batter. In a matter of minutes, the pitcher’s squad can already be a few runs behind, and the bullpen becomes destined for a long day.

From data available at Baseball-Reference (since 1914), in the regular season, there have been 1,282 instances of starting pitchers leaving the game before recording one out (thanks, Play Index). The first time this occurred, on record, was April 24, 1914. The Cubs’ Charlie Smith faced five batters; he beaned one, allowed three hits, and one counterpart reached on error. The last time it happened was August 7, 2013, when Shelby Miller was yanked after taking a line drive to the elbow off the bat of Dodger’s outfielder Carl Crawford. 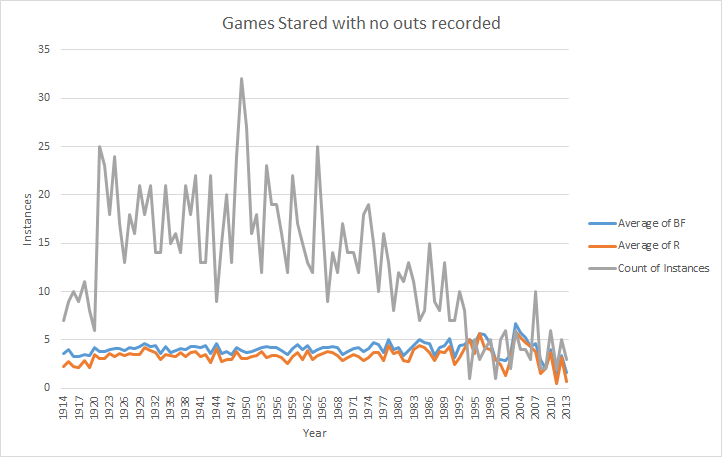 This is a phenomenon that used to happen much more frequently in the early-to-mid 20th century, peaking at 32 occurrences during the 1949 campaign. Yet, to this day, the average amount of batters faced (BF) and runs allowed (R) has remained pretty steady for zero-out starts (let’s call them ZOS). Why? I don’t know. I’d like to hear some theories, though. Let’s get into some interesting facts for these rare outings:

The most frequent offender

898 pitchers have accomplished this feat, with 265 of them doing it more than once. Nobody failed to record an out in a start more often than Vern Law, however. He did it an astounding seven times! The funny thing is that Law was a pretty decent pitcher, accumulating 26.2 rWAR in his career while posting a 3.77 ERA from 1950 through 1967, all with Pittsburgh.

No manager has ever allowed an opponent to bat around in a ZOS, but there have been some close calls. Five pitchers have gotten to face eight hitters without setting down one batter. Remarkably, Paul Wilson has done it twice, one time each in 2003 and 2005. The other three pitchers tied for this dubious record are Blake Stein, Bobby Jones, and Bill Krueger.

Phil Dumatrait, Wade Blasingame, and Warren Hacker have all allowed three home runs in their ZOSs. Dumatrait is the most recent to do so, when as a member of the Reds, he allowed three straight home runs to the Brewers’ Rickie Weeks, J.J. Hardy, and Ryan Braun on September 9, 2007.

Recorded a strikeout without actually getting an out

As you know, a batter can still reach base on a strikeout without the team being penalized with an out depending on the catcher’s handling of the pitch. Thrice a pitcher has fanned a batter in a ZOS: Scott Mathieson in 2006, Wilbur Wood in 1973, and Virgil Trucks in 1948. For Mathieson, it was actually the first batter of the game — he had to leave with an elbow injury which resulted in him having Tommy John surgery. Wood and Trucks faced six and four batters, respectively.

Those who couldn’t find the strike zone

Teams that won in spite of the starter

Of the 1,282 games the no-out start has occurred, only 293 of them have been won (22.9%). Here’s how a team’s winning percentage changes per batter faced in a ZOS, with a distribution of total ZOS per BF as an overlay. 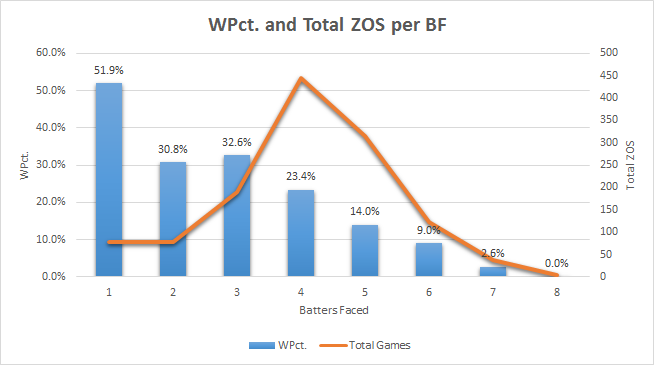 As expected, the likelihood of winning a ZOS worsens the longer the manager waits to make a call to the bullpen. It also makes sense that the odds of winning are 50/50 after one batter faced, as the worst that can be done is a solo home run. A good portion of the one BF games occur due to injury, too.

Baseball-Reference doesn’t have a complete record of WPA because play-by-play data is incomplete pre-1973. From what we do have, we can see who had the worst ZOS according to WPA. And the award for worst ZOS goes to…Dennis Tankersley. As a Padre, he had -56% WPA ZOS against the Barry Bonds led Giants on April 9, 2003. Here’s how the inning went before he was pulled:

The “best” ZOS belongs to Joe Gibbon. On June 9, 1967 recorded a -3% WPA against the Cardinals. Oddly enough, his counterpart Bob Gibson failed to make it out of the first inning too, although Hall-of-Famer retired two batters.

Unlike WPA, Game Score exists for all seasons because it’s simple in its computation. The worst performance in a ZOS, per Game Score, is seven. Two pitchers discussed previously have hit this low: Paul Wilson (twice) and Blake Stein (once). These low scores were in the same games they faced a record eight batters. The best Game Score in a ZOS? 50, which is the starting point for the metric. Three pitchers have accomplished this: Babe Ruth in 1916, Johnny Welch in 1933, and Scott Elarton in 2001. All three faced one batter, with Ruth and Welch allowing their opponent to reach on error. In Elarton’s outing, he pegged the leadoff hitter. Given the facts, one would assume Ruth and Welch truly had a “better” start than Elarton. Yet, for whatever reason, Game Score doesn’t debit a pitcher for hitting a batter.

We all know that even the best players have bad days. While pitchers would rather put a ZOS behind them, it’s pretty interesting to look back at the games when everything that could go wrong actually does go awry. Of course, the information in this piece is frivolous, but I must say that some of the facts I found were pretty amusing.

This entry was posted in General Baseball. Bookmark the permalink.