Ah, spring training. It’s a time when we get a little too excited about some obscure player in above his head and a time when we worry about another player struggling in extremely small sample sizes. This year, the scrutiny is on Dellin Betances, who hasn’t pitched well this month. After his sixth appearance against the Mets’ yesterday, he’s allowed seven hits, two walks, and four runs in 5.1 innings pitched. After a monster 2014, this performance has resulted in some groans about his upcoming season.

Last year, Betances was brilliant in spring training. So now that he hasn’t gotten off the start most expect, the reaction has been mostly negative. Fans are fickle, so I understand the response, but I don’t think there’s any reason to be worried just yet. One focal point has been Betances’ velocity this month. After averaging 96.7 MPH on his heater last season, some have grown worried about Betances hovering around 92 and 93 MPH in recent outings. Joe Girardi has addressed this, stating that Betances’ velocity is right around where he was at the same point last spring. Girardi’s not fibbing.

Betances pitched in fifth and sixth outings of this spring in the past two days, so I decided to compare his fastball speed to the same stage last year. All the velocity readings I have are from the YES Network gun, which is a caveat in itself. Who knows how accurate it is, but it’s all we have to go by because there is no PITCHf/x data available. Without further adieu, here is what Betances did in 2014 in his fifth and sixth spring training appearances:

Dellin threw almost all curveballs yesterday, so I think we can just ignore those two slow fastballs. Plus, Chad Jennings spoke to a scout who had Betances at 92-93, presumably during warmups if the YES gun is right. So what can we deduct? Betances’ velocity Monday (his fifth game) was virtually the same as last year’s fifth and sixth appearances. If you’re going to call four pitches greater than 94 MPH last year as a sign of decline this season, then you’re nitpicking. Again, I don’t read anything into the two heaters he threw yesterday given Jennings’ report, so I’m confident his velocity will gradually increase. Just look at how he progressed last year in the regular season, especially after sitting at similar velocity readings at this very same stage in spring training: 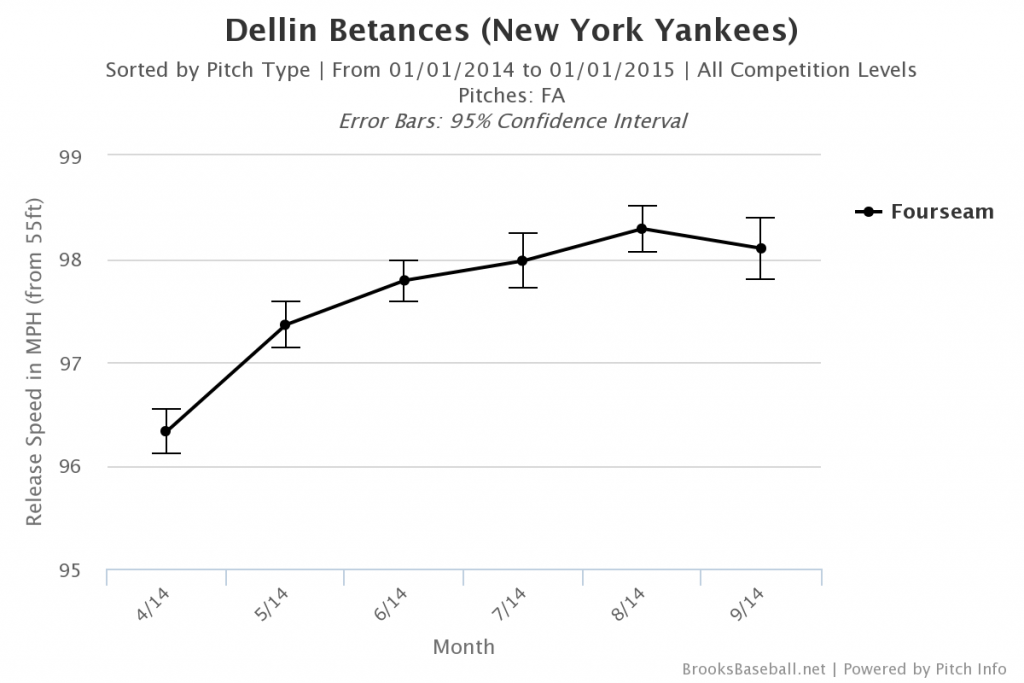 As Betances gets his last few outings of work in this month, his fastball should perk up. For now though, there’s nothing to fret about velocity-wise. Let’s also not forget the incredibly small sample size we’re dealing with at this point. Pitchers and hitters slump from time to time, it’s just not as noticeable when it’s in the middle of the season. When it’s at the beginning or the end of the season, the serial position effect comes into play. That’s precisely what’s happening to Dellin right now, especially because there seems to be a scapegoat (i.e. velocity). Yet, as Girardi noted, Betances’ stuff is the same as last year and we have the evidence to back that up. The only difference has been the results.

Now that we’re off the velocity watch ledge, let’s talk about something that is a legitimate concern: command. It’s evident that some poorly located pitches have hurt the tall right-hander this spring, such as the hanging curveball Juan Lagares took deep in the video at the top. Dellin’s minor league career was littered with control problems and high walk rates, which is the main reason he failed as a starter. Everything came together last season (2.4 BB/9, 7.0% BB rate), so I think there is probably some regression to the mean coming this year. That isn’t to say he hasn’t improved his pitch spotting; I just don’t expect his command to be as good as last year. Of course, as Dellin’s velocity picks up, we might not notice his location woes quite as much. It’s a lot easier to get away with 95+ in the middle of the plate than 92-93. Plus, the higher speed should make his curveball better to boot.

There’s no need to get in a huff about Betances’ slow start. We’re dealing with a ridiculously small sample size and he’s still getting into the swing of things. The velocity should come, and although his control might be due for some regression, Dellin should still be dominant even if he’s a lesser version of his 2014 self.

This entry was posted in Analysis, Spring Training and tagged Dellin Betances. Bookmark the permalink.