Chris and I were a bit busy yesterday, so we don’t have any new content for you today (other than the upcoming game thread). So, I’m reposting a piece I did on the outcome of the Yankees’ 2008 farm system. Any stats from the 2014 will be missing, but I think the purpose of the article is still applicable.

Six seasons have passed since Baseball America ranked the Yankees’ farm system fifth-best in baseball in 2008. It was the second straight year the publication pegged the Yankees as such, displaying confidence in the system despite a key graduate in Phil Hughes. The Yankees clearly have struggled to select and develop amateur talent since then, but what did they harvest when the system was at its peak?

Partially based on Sam Miller’s piece on the Angels over at Baseball Prospectus, I tracked the performance of the Baseball America’s 2008 top 30 Yankees prospects through 2013. Each season, I took a look at how many prospects remained in the organization at year’s end, and how much WAR accumulated.

Not many of these guys look like anything special today, but at the time, the system was pretty deep. In the top ten, Joba Chamberlain and Andrew Brackman both had ace ceilings. Austin Jackson, Jose Tabata, and Brett Gardner all were projected to be above-average regulars. Sinkerballers Jeff Marquez and Ross Ohlendorf had back-end rotation expectations, while the other pitcher in the top 10, Alan Horne, was more of an X-factor with his extensive health issues. Last but not least in the upper third was Jesus Montero, whose top prospect status was just budding at the time. It was a very projectable top 10, with a variety of other good prospects rounding out following 20. What happened?

Rather than deriving value directly from the prospects in this group, Brian Cashman exchanged many of these players for established Major Leaguers. In nine trades, the Yankees unloaded 12 of the top 30.

It’s striking that the front office shipped out 40% of this prospect group, fitting the narrative that the Yankees don’t give players on the farm a fair shake, preferring a club composed of veterans. In a vacuum, the Yankees may wish to have retained a few of these guys, particularly Jackson and Melancon. Getting Granderson while already having Brett Gardner in the system made it a bit easier to part with Jackson, but the Melancon move may be one the front office would like to have back. Hindsight is 20/20, but looking at the bullpen today, the Yankees probably wished they’d had kept Melancon over a half-year of Berkman. Of all these trades, only one was a definite victory for the Yankees: the Swisher move. Some of these moves haven’t had much impact either way (trades 1, 4, and 8 in particular).

Trades weren’t the only way this list was turned over:

Amazingly, there are still a couple guys on this list ascending the minor league rungs with the Yankees:

Now that we know about the guys who didn’t make it with the Yankees, let’s examine what’s happened to those who have reached the majors: 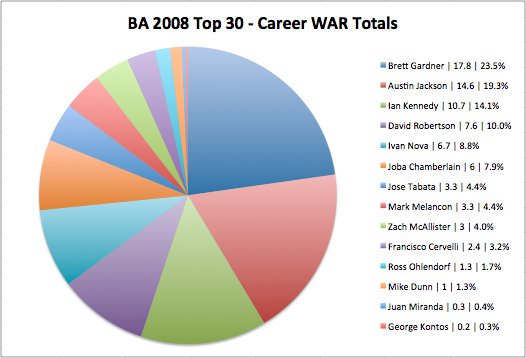 An astute reader may note that these percentages add up to more than 100%, so I must note that players who have negative WAR, such as Jesus Montero, factor into the total.

Gardner and Jackson have clearly been the most valuable of the crop, but no star players were born out of this group. It yielded a bunch of useful players at the Major-League level, with David Robertson really being the only elite player of the group when taking position into account. The jury is still out for some, such as Ivan Nova and Mark Melancon who theoretically can still improve. Most are known commodities at this point, though. 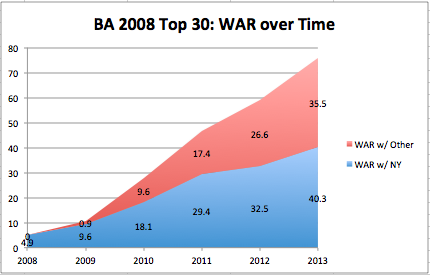 Compared to other clubs, the Yankees have been the benefactor of most of the group’s production in the big leagues. It’s pretty close though, with two of the top three performers being dealt away via trade (Jackson and Kennedy). Obviously, the difference would be larger if we take into account players the Yankees acquired in return for prospects, such as Swisher and Granderson. For a look at the Major-League statistics of the Top 30 through 2013, click here for hitters and here for pitchers.

Although the Yankees received a good amount of value from the prospects in this group via production and trade, it’s hard not to reflect upon this group as an overall disappointment. Most of that sentiment stems from the underwhelming turnout for Joba, who was supposed to be an ace and a workhorse for years to come. He’s not alone, however, as other big name prospects like Montero and Brackman flopped. It’s reasonable to guess that the Yankees and the rest of the baseball world were expecting a bit more from what Baseball America labeled the fifth-best system in the league.

This entry was posted in Analysis, Prospects and tagged Repost. Bookmark the permalink.