Losing Chris Capuano to injury isn’t going to alter the Yankees’ season outlook from a win/loss perspective. What Capuano’s injury does change, however, is the openness of competition for that final rotation spot. Capuano wasn’t a shoe-in for the job, of course, but he had the inside track. Now, after coming up lame while covering first base on a grounder, he’ll be out of commission for a good period of time:

Yankees announce that LHP Chris Capuano has a Grade 2 quadriceps strain. Safe to say he will begin the year on the disabled list.

This raises the following questions: when do the Yankees first need a fifth starter, and who will take the role? We probably should have been considering the former question before Capuano’s injury, as minimizing the amount of starts he gets (or any last man in the rotation) is generally a good idea. Then again, the Yankees were considering a six-man rotation to give extra rest to Masahiro Tanaka and CC Sabathia, so skipping the fifth starter might not have been a thought when Capuano was still in the fold. 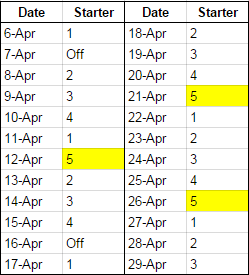 Without Capuano, I suspect that the Yankees are more likely to pass the fifth starter when possible in April. Given the schedule, the Yankees will need a fifth starter on April 12th, but not again until April 21st. Should they need the April 7th rain date for opening day, they’d still be able to skip the final spot once thanks to the April 16th off day. In total, everyone can remain on normal rest (including the ace getting one turn on extra rest) with the fifth starter getting only three starts in the first month. I’d guess Capuano will be ready by the end of the month, but we can reevaluate that later. So, who will make those starts?

Adam Warren and Esmil Rogers are probably 1a. and 1b. for the gig. Rogers has a lot more starting experience in the big leagues, with 43 career starts to Warren’s 3. However, it’s evident that the Yankees like how both of them play in short stints out of the bullpen. Plus, it’s not as if Warren has never started — he was groomed as a starter in the minors. What I think might happen is that both will open the year in the bullpen, but the two will also prepare for the April 12th start. If either of them is needed in relief before that date, then the other can enter the rotation. One other possibility is a tandem start on the 12th, where perhaps Warren and Rogers pitch two or three innings each.

Chase Whitley and Bryan Mitchell linger behind Warren and Rogers, but are capable in a pinch. Mitchell has much more upside than Whitley, but probably could use a little more seasoning at Triple-A, where he threw just under 42 innings last year in his debut at the level. His 11 frames in the majors were pretty good, but certainly not enough to make a judgement on. Whitley’s major league ready, albeit nothing special. He got off to a nice start when he first got the call up in 2014, but he regressed pretty quickly.

Having a 40-man spot helps

Left-hander Jose De Paula has never pitched in the majors, and only has 51.1 Triple-A innings to his name. Yet, the Yankees signed him to a big league contract this winter, which clearly shows that the front office likes him. He’s definitely in the mix, but without the track record, he’ll have to blow away the coaching staff in the next few weeks to make the jump.

Scott Baker and Kyle Davies are veterans with far more service time than anyone else in the running for Capuano’s spot. Yet, Baker’s been unhealthy and a shell of himself the past two seasons, and already got bombed in his first spring outing. Davies hasn’t even seen the majors since 2011, and was mostly bad at the highest level (with the exception of 2008). Both guys are non-roster invitees, making it a long shot that they take away someone else’s 40-man spot.

Expect some irrational calls for Luis Severino to be the man for the job in April. The Yankees’ top prospect has been fun to watch in the past couple of weeks, but he really has no business breaking camp with the team. The kid is just 21 years-old and has only 25 innings above A-ball, all with Double-A Trenton. He’s simply not ready for the show at this point.