Over the weekend, Masahiro Tanaka announced that he was altering his pitching style, which will result in lower velocities. According to Tanaka, his change in approach is two fold: one part pitch selection, one part mechanics. Here’s what the Yankees ace had to say about it:

Because of the fact I’m throwing more two-seamers, that would obviously make the velocity go down a bit. As for my pitching style and my mechanics, I’m trying to relax a little bit more when I’m throwing, so that might have something to do with it.

Let’s start with the change in pitch selection. When Tanaka talks about his two-seam fastball, he’s referring to what PITCHf/x identifies as his sinker. Per PITCHf/x, Tanaka threw his sinker 23% of the time last year. The remainder of his arsenal primarily consisted of his four-seam fastball (25%), splitter (24%), slider (22%) and curveball (6%).

Looking at Tanaka’s starts from last year, he performed noticeably better when he threw more sinkers. On April 16th, Tanaka turned to the sinker nearly 40% of the time, and had his best start of the year according to FIP. He struck out ten batters and walked just one over eight shutout innings. 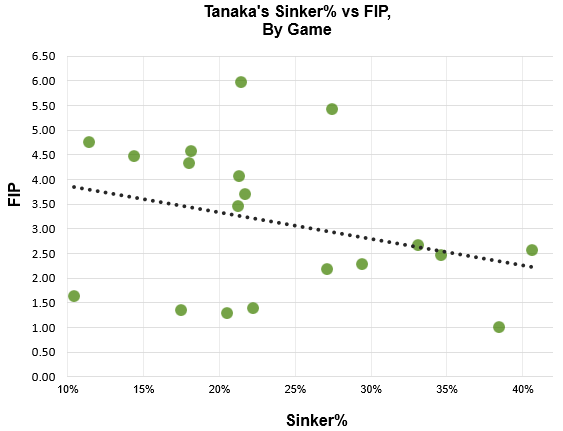 Small sample size caveats obviously apply here, but this trend is still very encouraging. The more sinkers Tanaka throws, the better he seems to do.

But what about the change in mechanics? Tanaka also implied that he tweaked his delivery, and may no longer be throwing at max effort. Let’s look at how Tanaka performed last year as his average four-seam velocity varied. 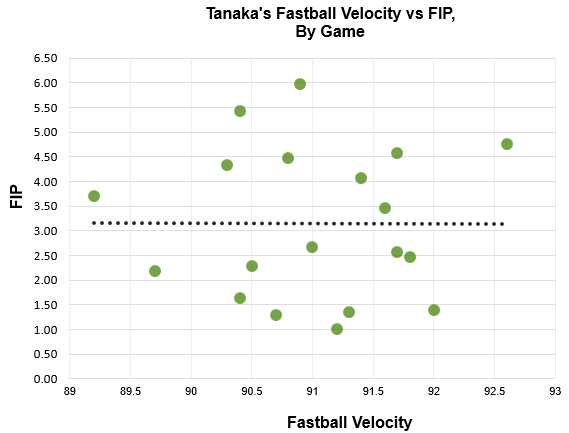 Not a lot going on there. Tanaka was just as good in the high 80s as he was in the low 90s. Regardless of what the graphs says, it’s hard to argue that higher velocities don’t make for better pitchers. The harder a pitcher’s throwing the ball, the less time the batter has to react, leading to worse offensive outcomes. That’s pretty obvious.

But at least in Tanaka’s case, there’s no evidence that these lower velocities make him any less effective. Maybe he has better command when he’s not throwing the ball as hard? Maybe his splitter dictates his performance moreso than his fastball velocity? It’s not immediately clear. But there’s little reason to think a Tanaka who sits around 90 couldn’t still get the job done.

The real question, however, is if he’ll be able to stay healthy. Tanaka’s elbow is damaged, and whether it will hold up all season is anyone’s guess. However, Tanaka’s decision not to throw at max effort should definitely help.

The American Sports Medicine Institute came out with a position statement on Tommy John surgeries last May. They gave nine recommendations for reducing the risk of ulnar collateral ligament tears — the injury Tanaka sustained. From their list of recommendations.