In the last year, the Yankees have become a younger team. Players like Nathan Eovaldi, Didi Gregorius, and Greg Bird have come along and entrenched themselves as long-term assets integral to the organization’s future success at the highest level. Yet, the veteran identity of the club isn’t going away just yet. Much of the roster is still burdened with aging stars at high salaries. Some of them still productive, but merely remnants of their prime seasons that earned them their current megadeals.

Entering the offseason, perhaps the Yankees greatest obstacle to improvement is that no large contracts are expiring. Given Hal Steinbrenner’s desire to compete below the luxury tax threshold, this doesn’t appear to bode well for the club’s chances in the free agent market. Accounting for projected arbitration raises, expiring contracts, and changes in annual salary for current deals, only a hair less than $1 million has been freed up in comparison to last year. 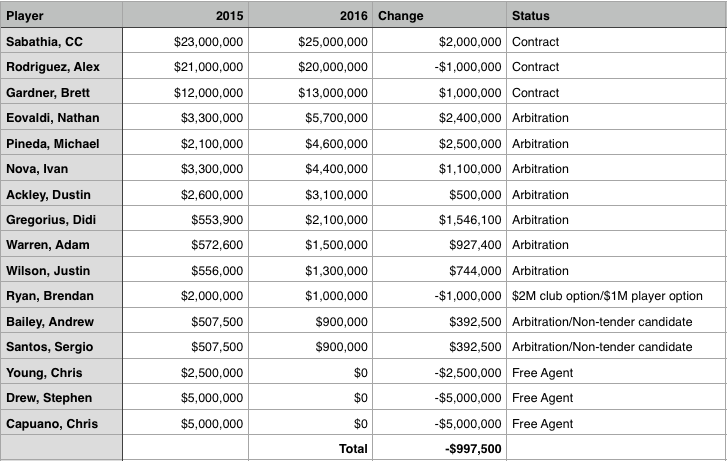 From that alone, it’s hard to envision the Yankees repeating their post-2008 or post-2013 free agency sprees. Doing so would require not only a huge year-over-year increase in payroll, but also a much larger luxury tax bill. So, if not now, when will there be a greater amount of financial freedom? Look no further past 2016:

Even more payroll is available after 2017:

Note: Michael Pineda, Dustin Ackley, and Nathan Eovaldi are free agents after 2017 but not included above. Arbitration increases not considered in previous two tables.

That’s anywhere between roughly $91 and $113 million coming off the books in the in the next two seasons (depending on Tanaka’s opt-out). Unless the club goes all-in this winter, the Yankees are set up to be big players in the post-2016 and post-2017 free agent classes. Exciting! Yet, the players set to hit the market those years aren’t quite as enticing as those available in the in the coming months.

This year, the biggest names available are David Price, Jason Heyward, and Justin Upton. Zack Greinke could opt-out. Others like Ben Zobrist, Howie Kendrick, Jordan Zimmerman, and Yoenis Cespedes will be highly sought-after too.

After 2016, the list isn’t as deep. If healthy, Stephen Strasburg will be the darling of next offseason’s free agent crop. There will be numerous veteran position players available, albeit past their primes (following is not wholly inclusive): Jose Bautista, Edwin Encarnacion, Adrian Beltre, Carlos Gomez, Jay Bruce, and Justin Turner. The bullpen crop should feature closers Aroldis Chapman, Kenley Jansen, Mark Melancon, and Drew Storen. Fast forward to post-2017, and it’s harder to forecast the quality of the crop. Sure, Jake Arrieta and J.D. Martinez pop out, but remember that a lot can change in the next two years.

Despite payroll flexibility not improving for another season, perhaps ownership will be willing to foot a larger tax bill next season with knowledge that significant salary comes off the books in the next two years? As I mentioned before, it seems unlikely. Considering recent behavior, it appears the team will only spend if money is newly available. When the Yankees added Brian McCann, Jacoby Ellsbury, and Carlos Beltran, players like Robinson Cano and Curtis Granderson were out the door. This year, there isn’t a parallel. Plus, if Hal is truly committed to getting below the $189 million luxury tax threshold, signing big names this winter wouldn’t help the team meet that goal even considering some of the expiring deals in the next two years.

While I certainly don’t expect the team to be big players in the free agent market, no Yankees free agent signing should ever come as a surprise. This is the Yankees after all, even if they haven’t acted like it lately. For now, the safe bet is that the Yankees take a tact similar to last season by trying to acquire young and controllable talent. Yes, there are some exciting names available in free agency this offseason that the franchise would be all over historically, but the apparent financial strategy of now doesn’t mesh with making a big splash in the coming months.

This entry was posted in Free Agency, Speculation. Bookmark the permalink.

7 Responses to Musing free agency strategy this winter and beyond