Less than 24 hours since dealing Adam Warren for Starlin Castro, the Yankees made another trade this evening. Another pitcher is on his way out of the Bronx, this time its southpaw Justin Wilson in exchange for two prospects from the Tigers. The minor leaguers are Luis Cessa and Chad Green, both right-handed starting pitchers apparently acquired to add some rotation depth in Triple-A.

Wilson’s stint was short in the Bronx, previously acquired in a swap with the Pirates last offseason for Francisco Cervelli. His 2015 performance was rock solid in pinstripes: he pitched to a 3.10 ERA/2.69 FIP in 61 innings (1.5 fWAR) and a superb 27.1% strikeout rate. The lefty flamethrower averaged 95 MPH on his fastball and had no problems retiring both right and left-handed hitters. It didn’t take long for him to become the de facto “seventh-inning guy”, and he should take on a similar or better role in Detroit.

Philosophically, this is a peculiar trade for the Yankees. We’re used to them being the side moving prospects for a major leaguer, not vice versa. Furthermore, it’s not like Wilson was expensive or nearing free agency. He’s under control for the next three seasons, and projected to make $1.3 million in arbitration. That’s peanuts.

Joe Girardi will need to find a new bridge to Dellin Betances and Andrew Miller, but at least he has a plethora of options at his disposal. Perhaps Chasen Shreve rebounds from his shaky second half. Jacob Lindgren could emerge. Likewise for Nick Rumbelow, Nick Goody, Branden Pinder, and James Pazos. There’s always the external route too.

So what about the prospects? The headliner is Luis Cessa, who was part of the trade that sent Yoenis Cespedes to the Mets this summer. The Mets initially signed Cessa as an infielder in 2008, but later transitioned him to the mound in 2011. The scouting reports on the Mexican right hander aren’t glowing, but he does appear to have a future in the big leagues. Here’s what Baseball Prospectus said about him in their Tigers Top 10 Prospects piece last month:

…Cessa doesn’t offer the same kind of upside as Fulmer but does have a chance to pitch in a big-league rotation. The fastball is plus, generally sitting 92-94 with some downhill plane and sink, and could play up in shorter spurts because of his arm strength. The change is his best secondary pitch because of his arm speed and it features some late fade. His fringe-average slider will sometimes flatten, but it’s a pitch he throws for strikes with tilt when he finishes the delivery. It’s very much a back-end profile—and Detroit may be tempted to see if the stuff plays up in a bullpen role—but his ability to throw strikes does give him a chance to pitch every fifth day.

Kiley McDaniel had a similar sentiment prior to the 2015 season:

…he’s developed as a starter but his potential big league fit is in the bullpen.  The 6’3/190 righty will run it up to 96 mph early in starts but would settle around 90 mph. His curveball is ahead of his slider and he also has a changeup is good at times, all flashing average to slightly above for scouts, with the ultimate fit likely a multi-inning swing man or middle reliever.

The most likely outcome appears to be as a reliever, but he’ll certainly get a look as a starter. After making twelve starts in Triple-A this year, he’s on the precipice of the big leagues. He was just added to the Tigers’ 40-man roster a few weeks before tonight’s trade, so he’ll join the Yankees’ 40-man roster as well. With that in mind, he’s probably fairly high in the pecking order to make a spot start at the major league level if necessary.

Between Double and Triple-A, Cessa threw 139.1 innings posting a 4.52 ERA/3.08 FIP. That’s not terribly impressive, but KATOH, our own Chris Mitchell’s prospect projection system, is somewhat of a fan of the 23 year-old righty. It spits out a 3.3 WAR projection through his age 28 season. Chris also provided me with some Mahalanobis comps for Cessa: 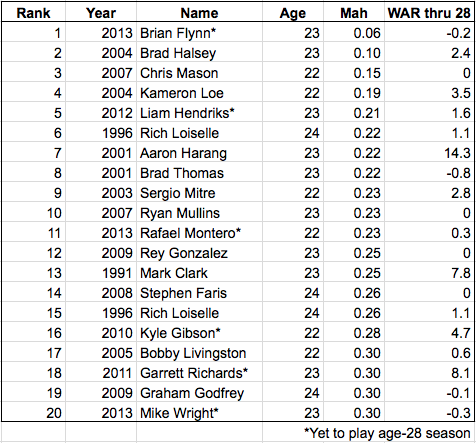 These comps aren’t to be taken as definite outcomes, but can provide a general idea of the type of player a prospect might be. Most of these guys are nobodies, but Aaron Harang, Kyle Gibson, and even Garrett Richards had somewhat similar minor league seasons to Cessa in 2015. Hence, there’s some reason for optimism.

The other prospect coming east in this deal is Chad Green. No information in the previous BP article about Green, but we do have something from Kiley last year:

Green signed for $100,000 out of Louisville in 2013 and has made nice progress since then, with his velocity ticking up a bit. He now sits 91-94 with above average life and has hit 96 mph, with and slider and changeup that are both fringy and flash average at at times. The 6’3/215 righty will head to High-A in 2015 and continue to start, but will turn 24 this season, so he’ll need to move faster or shift to the pen, but likely will continue starting since it’s hard to pass on back-end starter potential.

Green actually began and finished the year in Double-A, and pitched well. In just under 150 innings, Green had a 3.93 ERA and 3.22 FIP. Green should start 2016 in the Triple-A rotation with an opportunity for a spot start or two, although he is not yet on the 40-man roster.

KATOH isn’t quite as big of a fan as Green, likely due to being 24 and only in Double-A, but a 1.3 WAR through age 28 isn’t a dreadful forecast. Here’s the comps: 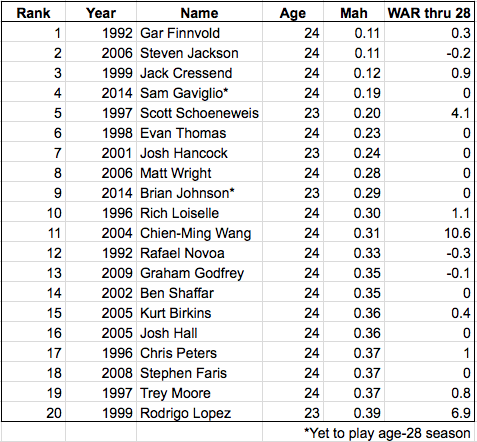 Again, mostly no-names on this list, although a few interesting results like Scott Schoeneweis, Chien-Ming Wang, and Rodrigo Lopez. Again, something to dream on albeit unlikely.

After some initial frustration with the move (I really like Wilson), I understand the reasoning from the Yankees’ perspective. There are a bunch of relievers at the upper levels of the system that have the ability to step into the big league bullpen and succeed. Meanwhile, there wasn’t much rotation depth at the Triple-A level before this deal. The Yankees deepened their lackluster hoard of starting pitchers while subtracting from one of the deeper components of the 40-man roster. Wilson will be missed, but the Yankees seem to thrive at building bullpens. I’ll trust them on this one.