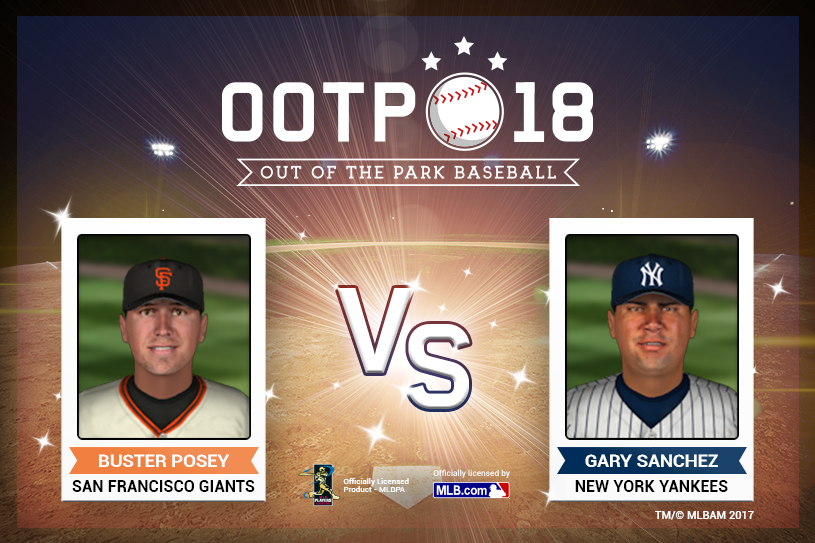 Anyone who has played video games in the past knows that cover art is commonplace. For sports games, there’s usually one, maybe two, star players featured on a game’s case. Out of the Park Baseball, a digital only PC/Max/Linux game, has never featured a player on the cover before (it’s digital only, duh).

Things are changing this year. Eleven (!) players will be on a “digital cover” as voted on by the OOTP community. One Yankee, Gary Sanchez, is eligible to be voted on to the team. You can vote here.

For those unfamiliar, OOTP is an incredibly immersive baseball simulation game. Essentially, it gives you the ability to run a franchise starting from today and control all facets of the organization. You can also go back in time and try to rewrite history. When the game is released on March 24, I’ll offer up some sort of commentary or review on this year’s version.

Voting results will be announced on a live stream on March 15th. For further details, see the official press release after the jump…

Out of the Park Baseball 18, an Official Licensee of MLB.com, MLBPA, and MiLB.com, will feature a Digital Cover for the first time, highlighting baseball’s “Perfect Team” of 11 top players at each position and the top Manager in baseball – as voted by its passionate community

Out of the Park Developments, an official licensee of MLB.com, the MLBPA, and MiLB.com, today announced Out of the Park Baseball 18 will have a “digital cover” for the first time in its illustrious history. Instead of choosing a single player, however, OOTP 18 will be represented by a “Perfect Team” of the 11 best players at each position – plus a manager – to celebrate the launch of the followup to the Metacritic 2016 PC Game of the Year.

“As a deep strategy game, we feel that nothing better represents what Out of the Park Baseball is about than putting the best possible team on our first-ever digital cover,” said lead developer, lifelong baseball fan, and Out of the Park Developments CEO Markus Heinsohn. “Baseball is the ultimate team game, and our fans argue every day about what makes us the best possible lineup. What better way to represent what we are all about than having them vote on the best players and manager to put on the digital diamond?”

Out of the Park Baseball 18 will be officially released on March 24, 2017. The follow-up to the acclaimed Metacritic 2016 PC Game of the Year includes several exciting new features and a treasure trove of deep improvements to its award-winning gameplay. The “Perfect Team” voting contest opens February 23 and closes on March 9, 2017. Fans will be able to choose from two players at each position as well as a manager. Winners of the vote will be officially named the “Perfect Team” and will be forever enshrined on the digital cover of Out of the Park Baseball 18.

The players in the contest that will be voted on are:

From today to March 23, customers may pre-order OOTP 18 for $35.99, a 10% discount off its full retail price. All pre-order purchases include early access to the Gold Master version on March 20, four days ahead of the official launch on March 24.

OOTP 18 can be pre-ordered through this link:

OOTP 18 runs on PC/Mac/Linux and, like last year, it features the American League and National League logos, the World Series trophy, official logos and jerseys for all 30 MLB teams, over 150 Minor League Baseball league and team logos, and historical MLB logos.