Last year I wrote a rave review of Out of the Park Baseball 18. Here’s how I introduced it:

Year after year, Out of the Park Baseball (OOTP) is the top simulation baseball game available. OOTP 18 is no different. The amount of depth is incredible; from being able to play historical seasons, manage every detail of one’s controlled organization, and having complete power over customization, there isn’t much one can’t do in this game.

On a yearly basis, OOTP is a reliably entertaining and immersive game that always feels like there’s nothing else necessary to add. Sure, some minor tweaks to AI always help improve the experience, but it’s almost impossible to come up with something that this game doesn’t have. That being said, the makers behind OOTP come up with new (and great) features anyway, and this year is no different.

Honestly, I could say the very same thing about this year’s iteration, OOTP 19. For a game that seemingly doesn’t have any more room for improvement because it doesn’t need anything else, the developers have found a way to make the game better this year. Thankfully, OOTP 19 isn’t trying to reinvent the wheel. The developers of the game know what already works and wisely left the game’s core in place. Instead, the new features are a supporting cast that amplify what the game does best.

There are a handful of new features this year, but I want to focus on two of my favorite ones before briefly noting some others that intrigue me.

OOTP has had 3D gameplay in the past, but I must admit that I didn’t delve into it. I wasn’t interested in the pitch-by-pitch of each game, so watching a game unfold wasn’t for me. This year, I gave it a shot and I’m glad I did. Though the graphics that OOTP 19 features aren’t mind blowing, they add some depth that makes playing individual games appealing. Seeing 3D real-life stadiums, outfielders running down balls in the gap, and baserunners sliding into home all make venturing into an individual game much more worthwhile.

OOTP didn’t need to add this feature, as its hard core fans like myself are seeking realism in its simulation. Given that its sim-engine is already top notch, it certainly makes sense to see the developers branching out a bit more. And it works! As I noted, I’m not someone who is drawn to this type of gameplay in OOTP, as I usually just like to sim a few days at a time and see what happens. This year, however, I’m definitely planning to do more in-game managing, and the improved graphics and animations are the reason. It really adds to the text-based play-by-play.

I don’t think the screenshot I’ve included below does the 3D graphics justice. For one, it’s the Rogers Centre, which isn’t the most aesthetically pleasing ballpark out there in the first place. The developers did a nice job on Yankee Stadium, for what it’s worth. Ultimately, it’s important to emphasize that the graphics aren’t what makes this game excellent. That being said, they do add another element to a game that really didn’t need much work. 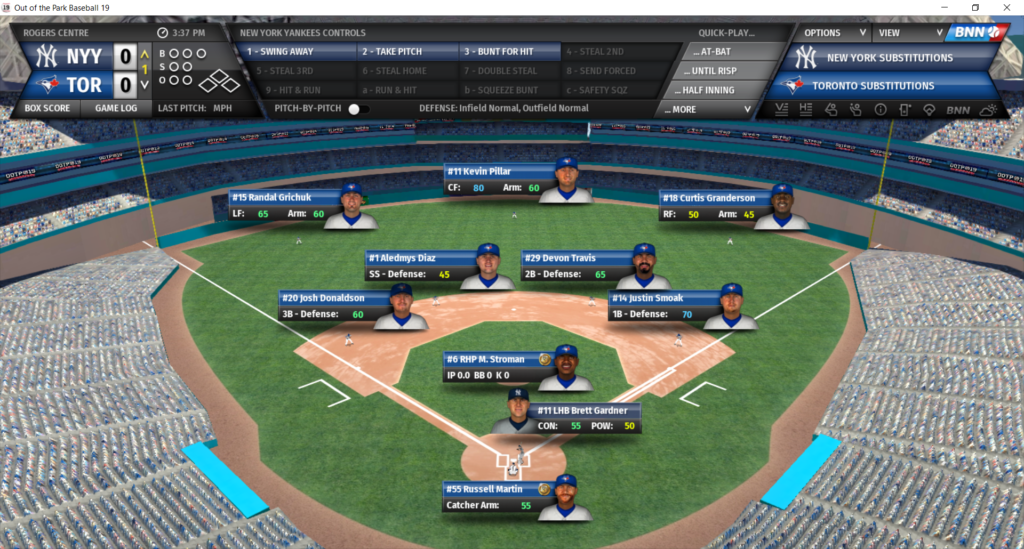 In past iterations of OOTP, I mainly just focused on the raw scouting grades for players and prospects. There wasn’t too much qualitative information and there wasn’t a simple way to get an idea of any particular player’s development.

This year’s game is different. In the screenshot below of Gleyber Torres‘ player page, there’s a paragraph giving a brief scouting report. It’s accompanied by the scouting grades we’re accustomed to seeing, which is helpful. Sometimes it’s easier to understand what a player can be or currently is with some words, rather than just a number.

As you’ll also notice in the screenshot, there are graphs. They don’t show much yet, but that’s because I just started my game. As months and years go on in my game, the graph will display the progression in a concise way that wasn’t easily accessible before. 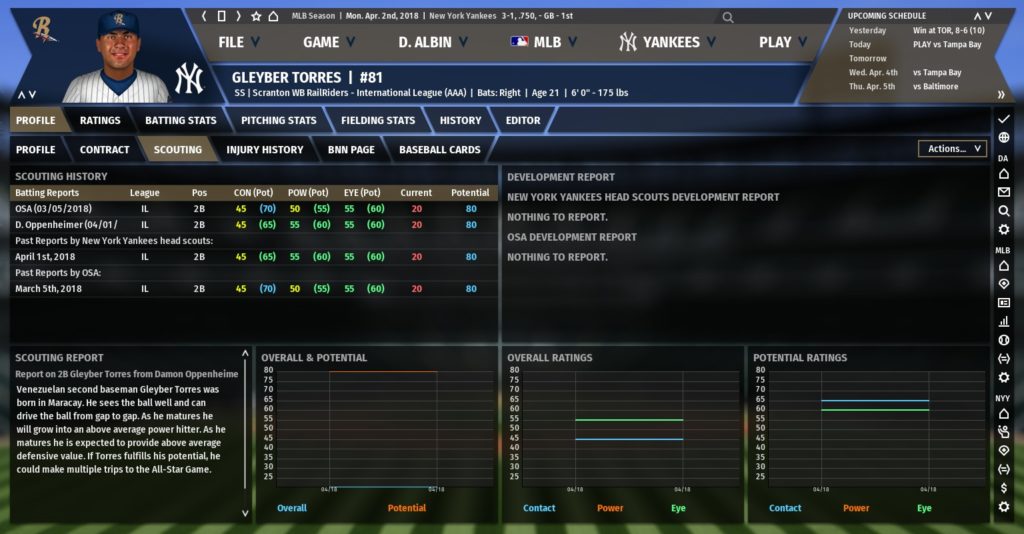 Those are just two of my favorite new things about this year’s version of OOTP. Here are a few others that have caught my eye that I haven’t had too much of a chance to explore yet, but are certainly welcomed:

Once again, OOTP is a must purchase. I’m glad that the developers continue to stick with what makes the game shine while bringing in new additions that buoy its framework. What’s more is that OOTP is for everyone. With complete customization of how much control a player wants over its team and league, it’s not terribly overwhelming for a beginner to play. Meanwhile, it also caters to the player that wants to have power over every last little detail from top to bottom.

OOTP 19 costs $39.99 and is available on Windows, Mac, and Linux. You can download and purchase the game here.

This entry was posted in Baseball Video Games and tagged OOTP. Bookmark the permalink.